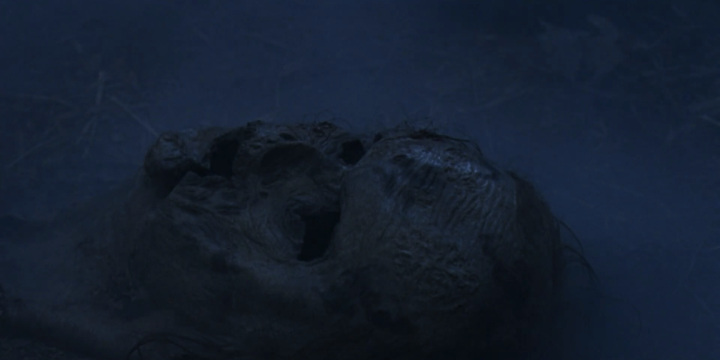 The post-zombie apocalypse landscape is changing, literally and figuratively. One more fallen soul leaves the others reeling, devastated over yet another loss. Not only that, the Whisperers have made themselves known through that brutal act of murder, which makes evident to our friends there’s a bigger world out there beyond their communities— they haven’t solved everything by joining together amongst themselves.
Michonne (Danai Gurira), Eugene (Josh McDermitt), Aaron (Ross Marquad), and Daryl (Norman Reedus) are left at the cemetery to take the corpse of Jesus (Tom Payne) with them. It’s more than obvious those “who walk with the dead” are out there in those spaces between zombies. Running simply won’t stop them. When the group make it back to the Hilltop, they not only have to mourn their friend, they’ll have to explain to the others a new threat has emerged.
Back at Alexandria, Negan (Jeffrey Dean Morgan) makes it outside alone for the first time in six years. He picks a ripe tomato off the vine to eat, surveying the town under the cover of night. He takes a shovel over to Michonne’s house, though nobody’s home. He grabs a compass before making his way over one of the walls. He’s interrupted when little Judith (Cailey Fleming) catches him at the end of her gun. He offers a promise: he won’t hurt anybody again. And Judith allows him to leave.

New guy Luke (Dan Fogler) attempts to ingratiate himself to Tara (Alanna Masterson) and Alden (Callan McAuliffe) by putting himself to work. Everybody’s concerned about Michonne and the others, who’ve been gone for over a day. Meanwhile, Daryl and Michonne lead their friends back home, lamenting the loss of Jesus and also the loss of Rick (Andrew Lincoln). A curious moment when Michonne thanks Daryl “for after” and Father Gore wonders: did they make a baby together? Just a thought. Along the way the group come to a bridge and find some Whisperers in a horde. They take one alive. She surrenders, begging to be spared. Michonne would rather cut her throat, whereas Daryl opts to take her with them.
Something compelling in the back half of Season 9 is seeing Negan, after six years of imprisonment, have to go out into the world again and learn what it is to defend himself all over. He’s not the confident, scary guy he was once, not like when he ran the Saviors with a ruthless iron fist. He’s without Lucille. His power’s diminished without her. He’s not used to life outside an “8×10.” Even when he had the Saviors, he didn’t need to DO anything other than smash a few heads. He’s far removed from a self-sustaining lifestyle. When he raids a department store, he’s found by a few angry, likely hungry dogs, barely escaping before they chase him down.
On horseback, Alden and Luke get to know each other better. Maybe one day we’ll hear their “two–man band, Symphony of Awesome.” They soon discover an arrow in a tree, which puts them in the way of a couple walkers, though nothing too difficult. Luke recognises the arrow was made by Yumiko (Eleanor Matsuura). He’s sure she’s left them “a trail.” They also hear a horde of walkers nearby heading south.

At Hilltop, people are rocked by the sight of Jesus dead. With him gone the leadership has effectively been passed to Tara, whom the place look to for guidance. Daryl, Michonne, and Tara want to get answers out of their new prisoner (Cassady McClincy) about her own group. She says none of them have names anymore. She claims not to know anything about the other communities. She says nothing else.
Tara’s letting Luke and their group stay while Michonne goes back home, wary about the prisoner being kept there. In other news, Eugene tries to admit his love to Rosita (Christian Serratos), but, as it happens, she actually hooked up with Siddiq (Avi Nash) before becoming a thing with Gabriel (Seth Gilliam), and she’s pregnant. Whoa!
Negan returns to the dilapidated Sanctuary, whistling his old tune into the darkness but, obviously, getting no response. He finds nothing except debris and one remaining Savior, zombified, stuck behind a door. All proof nothing lasts— not even power. Doesn’t stop Negan from wishing it were different. Suddenly, he notices zombies moving around outside. He takes the opportunity to try and gain back some of that power he lost, if only in physical violence. But can he survive on his own without others to kiss his ass and kill for him? Not so sure.
Daryl gets angry while Jesus is laid to rest. He rushes to their prisoner, demanding answers. She says there were ten of them in her group. “Walls don‘t keep you safe,” she tells Daryl. She says their group operated on an “us–or–them” worldview, killing anybody necessary to survive.
On the road, Negan uses a motorcycle from he Sanctuary to head back to Alexandria. He’s almost killed when Judith fires on the bike. He sees nothing out in the world for him. Is this a genuine change of heart? Hard to tell. He seems to have bonded with Judith, particularly after his strange relationship with Carl, so there may be hope.
In the woods, Alden and Luke see a walker, who suddenly stops in its tracks. They’re fast surrounded by the Whisperers. They were the ones leaving a trail of arrows. Have the two men finally met Alpha (Samantha Morton)? Looks like it. 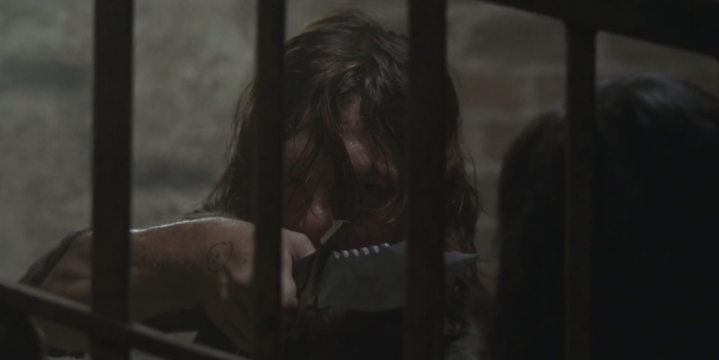 A solid start to the second half of Season 9. The Walking Dead has managed to keep Father Gore interested, even as the continuous shuffle of major characters has no end in sight (we’re losing Michonne in Season 10, though she’ll be in a handful of episodes). The Whisperers are also not just a new threat, they’re a new evolution of villain, using the post-zombie apocalypse world to their sick advantage. Excited for what’s to come.
“Omega” is next time.