* For a recap & review of Episode 5, click here.
* Season 2 has been announced! Rejoice, creeps! 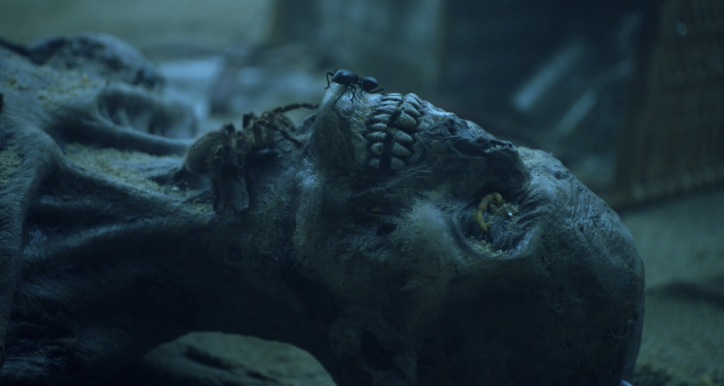 Skin Deep by Sloan— a.k.a Dr. Herbert Sloan (Chad Michael Collins)— is a way for people to ‘manage their body.’ It’s a supposedly revolutionary program. Henry Quayle (Dana Gould) has been contacted by Sloan’s company, given that he’s indulged in the doctor’s products before. He sits in the waiting room awkwardly with a woman named Kelly (Hina Khan). “Every body” there is a fat one, not-so-subtly suggesting there’s only a problem with fat bodies.
Dr. Sloan turns up to explain there’ll be no need for diets after his treatment. He reveals to them the real “fountain of youth” is actually a scientific method. In a tank, he has strange creatures from South America that are used in his procedure. They’re eel-like, but something altogether different, like an “advanced form” of a leech that eats fat instead of blood. Everyone present, other than Henry, is pretty sold on the idea. He’s not into a creature sucking on him. He’s got reservations, naturally, so he refuses to go through with it. 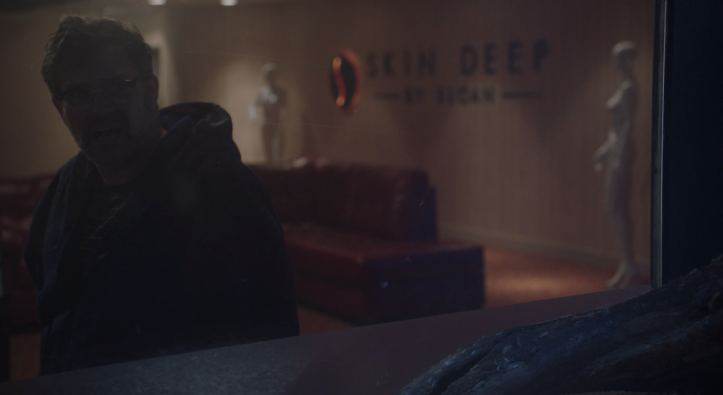 Skip ahead a couple weeks. Henry can’t stop looking at the more fit people around him. He runs into Kelly, who’s now much slimmer and able to eat whatever she wants without worrying about gaining any weight. Life has improved for her, all because of being skinny. “Everybody‘s doing it,” she tells him, trying to push him towards getting the procedure done.
And what’s the significance of the “next great American eclipse“? Hmm.
Henry is made part of a newscast with Kelly and Dr. Sloan. The doc’s going to use Henry as a live demonstration of the “body sculpting” technique he’s developed. Great time for people to start having stomach problems, like the station’s on-location reporter and even Sloan himself. Kelly begins experiencing eye pain, as well. The closer the solar eclipse comes, the more everyone’s weird bodily effects emerge. Kelly has a tiny creature peeking its way from her eyeball and she all but erupts in wormy guts. Looks like the procedure using newly discovered jungle creatures wasn’t so smart after all.

When Dr. Sloan tries to run off he’s confronted by Henry, angry at him for his dangerous body capitalism. This is where the doc semi-explains his “easy cure” in the leech-ish creature. He never intended on a solar eclipse being something that’d help these things reproduce and multiply within the body. But such is the hubris of science sometimes! Soon, Sloan dies, and his corpse bursts open to reveal a massive creature. It grabs onto Henry, trying to pull him into its maw.
But he manages to crush it with a vending machine, and gets a candy bar, too. 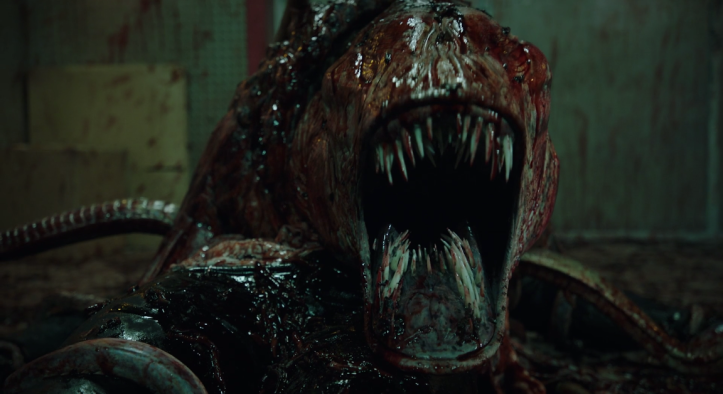 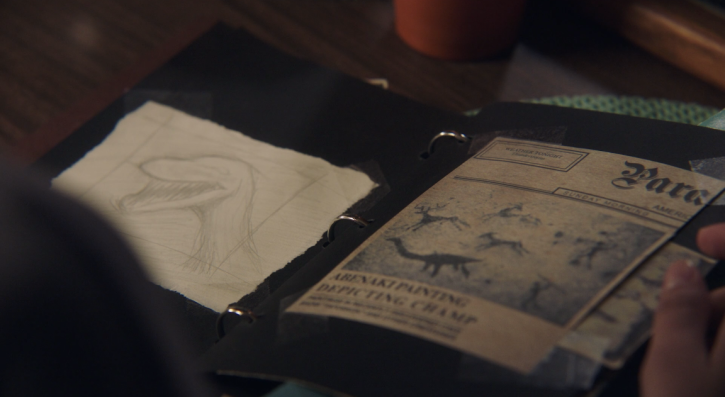 This episode has a The Fog-like introduction by an Adrienne Barbeau-style radio DJ. We get a look at a quaint family— the Philips’s. Suzie (Beth Keener), the mother, seems like a sweet lady, and so does her daughter Rose (Sydney Wease), but the father, Chet (James Devoti), is an intense, intimidating presence. A boy named Thomas (Connor Jones) drops by looking for Rose and has to deal with Chet talking about what he learned “in Nam.” Very, very uncomfortable, and violently unsettling. The patriarchy is strong in this household.
Chet’s not Rose’s father. Her real dad died. He spent his time chasing Champy— a cryptid that supposedly lives in Lake Champlain. The obsession continues in his daughter. She refuses to believe her father was crazy, like most everybody in their little ritual town believed, and like her own mother seems to believe, too.

The anger and betrayal Rose feels in her home life sends her running into the foggy woods. She runs through the trees, right into something strange laying in the sand. Thomas is not far behind, nor is her little brother Joseph. They’re all weirded out by the odd object. Thing is, it’s not an object at all: it’s Champy. The legends were true, and now Rose can vindicate her father’s name. Champy looks as if she was killed by something, bloody pieces taken out of her neck. It’s bittersweet for Rose, whose father was right about Champy, but whose father is also dead and gone. And Chet shows up, hoping to take advantage of the situation for his own benefit. Rose tries to help Thomas, biting Chet on the arm. This briefly stops the abusive man, but he gets his hands on the knife again. That’s when the legend of Champy becomes much more interesting. Apparently there are more of the creatures. One of them eats Chet up, then it mourns the death of its fellow creature. It lets out a roar. And it turns its gaze towards Rose and Thomas, though just for a moment. Afterwards, it drags the dead creature into the water. Nobody will believe the story of Champy without evidence. Yet, in a way, the memory of Rose’s father helped erase Chet from her life.
Maybe it happened for a reason after all.
What caused the dad to die is also what helped set his family free. 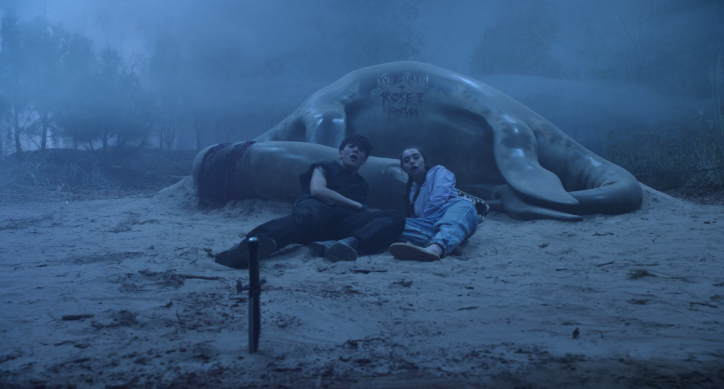 Excellent season finale! Both segments were solid. Practical effects throughout each were a ton of fun. Benjamin is a great director, as is Savini, the latter especially in this style because he’s got a great eye for effects. Season 1 has provided more good than bad, so Season 2 is going to be a real treat for us creeps.