A current day scene shows us Jimmy a.k.a Saul a.k.a Gene in his post-Breaking Bad existence, scrambling back to his place where he digs out a box of secret things. One of those is a case full of diamonds. He then removes the plates from his car, replacing them with fresh ones. He’s got the police scanner on, in case someone picks up his trail. And he’s got a number with him for a contact— maybe a familiar one for Ed, the vacuum salesman? At a diner, Gene stops for a while. He makes a call to one of his fellow workers, making arrangements, and also casually checking to see if anybody’s been looking for him.

After a while, Gene’s back home. Although he never turns off the scanner.
This is just his life now. Until one day, he’s sitting on the bench at the mall having his lunch and a cab driver named Jeff recognises him as lawyer Saul Goodman from Albuquerque. Gene denies being Saul, but Jeff refuses to accept it. “I just want you to admit it,” Jeff says. Gene eventually gives in and says the catchphrase from his ad. Seems that no matter where he goes, or who he pretends to be, he can never fully outrun his former identity. That’s when he makes a call to the number from earlier, which is, indeed, to Ed. Gonna be more expensive this time. Rest assured, though: Ed will get the job done. Suddenly, Gene decides different: “I‘m gonna fix it myself.” Uh oh.

Skip back to pre-Breaking Bad era.
Kim Wexler’s confused, and a bit troubled, by Jimmy McGill’s decision to legally change his name to Saul Goodman. She thinks it’s ridiculous, as well as shady. He’s convinced this is a way to make business out of his year suspension while dealing in burner phones. And nothing will stop him.

Things at the restaurant are tense with Lalo Salamanca continuing to run the show. He’s asking about Werner Ziegler, the engineer, and the bald guy, Mike Ehrmantraut, though he doesn’t know the latter’s last name. He’s sniffing constantly to try and find cracks in the cartel’s business. He has Nacho Varga pretty concerned most of the time. Certainly doesn’t help when customers are complaining about “stepped on” product lately and Lalo wants to hand out discipline to a local dealer. He wants to look through the stash, even with Nacho telling him the meth isn’t being tampered with before it goes out to the customers. He soon finds a few bags that aren’t quite correct.

Jimmy has plenty of big plans. He didn’t fully anticipate all the criticism from Kim, despite knowing she always calls him on his shit. She thinks he’s not reaching his full potential by targeting the business of pretty sketchy criminals. Like usual, Jimmy’s swinging for the low-hanging fruit. He dresses it up as not wanting to be the “loser brother” to Chuck’s star power. Really, it’s all about the fact he’d rather sell out to whatever is going to get him the most money for the least work.

Lalo is headed for a meeting at the Los Pollos Hermanos facility. He finds Gus Fring waiting, along with Juan Bolsa. He’s now told about the “altered” product he’s found at the stash house. Gus explains the situation with Werner and what happened. He feels bad for hiding the truth. Not that he’s telling the whole truth at the moment, either. Lalo is most curious about why Werner was building something in the first place. So, Fring takes him down for a look. At least a very surface look. He says the construction has to do with a chiller for his chicken. Lalo is definitely not convinced yet. He’d also like to meet the infamous Mike. An awkward moment.

In a carnival tent, Saul sets up to talk to his various hopeful sketchy clients / phone customers. He talks a great game, and this carnival atmosphere is the perfect place for a guy like Jimmy / Saul. His greatest asset has always been, and always will be, his mouth. He’s got his number already programmed on speed dial for his many new clients. For those who don’t get themselves a phone, he offers 50% off on all “non–violent felonies” for 2 weeks. Never a good sign when a lawyer’s giving out deals on service.
Always good to see Huell Babineaux around, as well!

All the Germans are dispatched. Mike makes clear to everybody they have to continue their secrecy. And it’s just as clear Mike feels guilt about what happened to the lead engineer. Afterwards, Mike meets with Gus, who tells him while Lalo is on “this side of the border” they can’t continue construction. After Lalo’s “dealt with” they can resume. Hmm. Interesting to see the slight tense moment between Mike and Gus, too.

We see Saul pushing hard to make a name for himself on TV. Once more making use of his film student buddies, which proves fruitful after he hands out another bunch of cards. The juxtaposition of Jimmy / Saul v. Kim, who’s out there trying to do genuine legal work for people who need it most, is a brilliant bit of writing, which we’ve seen time and time again throughout the series. Their visions of the law are vastly different. When exactly will Kim break? A mess, whenever it happens. And there’s also a look into Kim’s own situation through the young man she’s attempting to help. She sees the young, pregnant wife clinging to whatever her man says, standing behind him, even when it’s likely something bad is going to occur— it’s a snapshot of Kim, standing behind Jimmy, waiting to see when the ship goes down for good.
Jimmy does offer a hand, attempting to use his “powers for good” to help her client. But Kim refuses, no matter if it’s in the client’s best interest. She doesn’t want to keep going down this road because it’s fundamentally opposed to her career as a lawyer. Yet she does go down the garden path anyway once Jimmy’s gone. We can see her starting to break down when it comes to Jimmy, though. Only a matter of time. 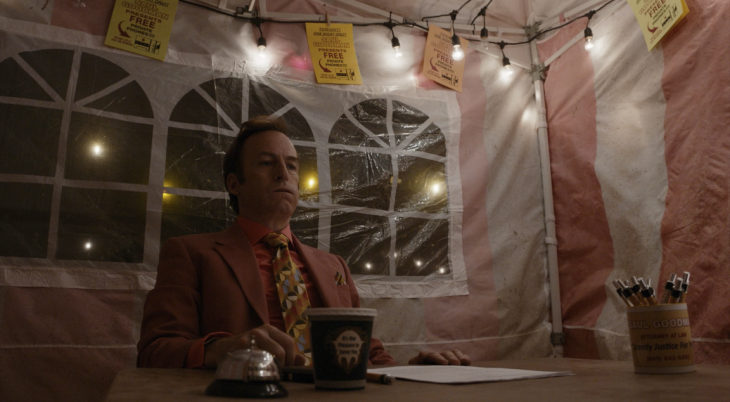 A stellar opening for Season 5. When’s Ms. Seehorn getting her award, anyway?