What ever happened to the Man in Black, William?
He’s in a mansion somewhere grappling with reality. “I know who the fuck I am,” he screams into the void. He sees a chandelier give way on the ceiling after dripping blood, gushing water onto him. He comes to in a bathtub with memories of Westworld and Dolores and his daughter Grace rushing through his head. He’s essentially experiencing his own version of Hell, confronting his guilt and his awful mistakes perpetually. He refuses to accept either potential truth about himself: he’s either free and “evil” or a mindless machine driven to a predestined faith.
The vision of Grace urges him to “finish the game.”
Then William comes to, discovering Charlotte is there looking for him. She explains the situation with Serac. Seems that, years prior, William did business with the man. He doesn’t care about the company anymore. Charlotte tries to convince him he should care, making him aware someone’s working from the inside at Delos for Serac. She needs a majority vote to take control of things before Serac can fuck them over, meaning she’ll need William to help sway others in her favour. Kinda like making a deal with the devil. We also know that Charlotte’s actually under Serac’s thumb. So much deviousness. “What if every choice you ever made wasn’t a choice at all?” 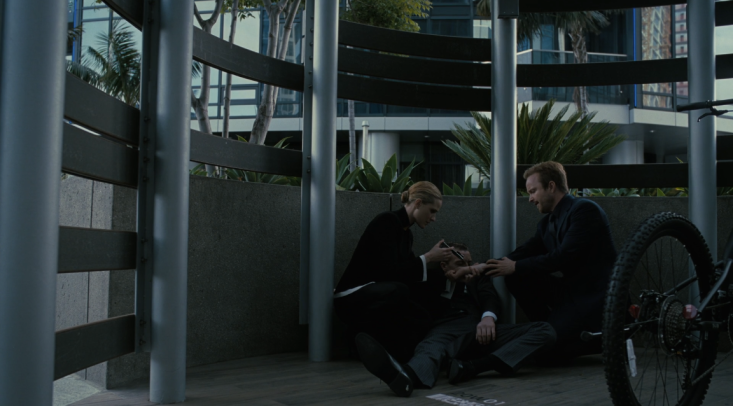 Bernard’s mind is full of memories. He’s remembering things he talked about with Dolores, as she gave him an abridged version of her manifesto. Right now, he’s in Victorville, California. A rocket launches in the background while people watch. Bernard heads back to a junky motel where he and Stubbs are laying low. He’s continuing to work on figuring out what Dolores is doing, using their meagre means to do what’s necessary. He wants to get Stubbs behind enemy lines posing as Liam Dempsey’s driver.

Working class Caleb is with Dolores, learning some social mobility hints to help him likewise get behind class lines. She needs him to look the part so he can infiltrate the upper class. She already has a copy of Liam’s security man Martin doing subtle work for her, too. She’s moving deeper and deeper into the bourgeois Dempsey’s inner life with no notice from anybody. Next, she knocks a guy out and pulls a syringe of his blood out to use the “encryption key” in it. She injects it straight into Caleb. I hope her gadgets are able to detect any STIs first. If not, yikes.

In a fancy restaurant Serac is working on Maeve, trying to mould her to his will. She keeps on resisting, regardless if he has control over her. He talks about wishing he could take her to France where he grew up with his brother. There’s a pain in his eyes as he recalls terrible memories. “Humanity‘s biggest threat has always been itself,” he says. He wants to create a better future. To do that he needs to understand humans inside out. Hence, Rehoboam. Thing is, the data from Delos Parks is necessary to make his machine work at full capacity. He needs to find Dolores and the key in her mind first. He takes Maeve to see “the divergence” where Dolores remade herself, as well as others. They got hold of an “identity broker” who he believes helped Dolores. The man refuses to talk. Serac uses glimpses of potential violent futures to convince the guy otherwise. The broker reveals he sent Dolores to someone called the Mortician (Elizabeth Anweis). After that, Serac puts a bullet in the man’s head. Not such a pacifist-type after all. And he’s built an “off switch” into Maeve to make sure she complies with his demands.

Caleb and Dolores get into the bank looking to make a withdrawal in Dempsey’s name— the man whose identity they’re using deals on behalf of Dempsey, his client. Although the “blood marker” gets them in and through initial security they also need Caleb’s smooth talking to accomplish the job. Then, one more step of identification. Caleb is somewhat sweaty and nervous, so it takes a second try, and luckily the ID’s successful. No need for Dolores to “kill everyone.”

Pretty exciting to watch Maeve out in the real world. She’s so powerful she effects most everything electronic near her. She goes in search of the Mortician, winding up at a club where two tough guy bouncers act like they’re going to do something nasty if she doesn’t get out of there. She chooses to kick ass, shooting one of them right in his stupid dick. She makes her way back to see the Mortician, asking about Dolores. She finds out Dolores was looking to smuggle out bodies, which the Yakuza facilitated.

At a masquerade ball where women are being pimped out, Caleb and Dolores throw on masks and mingle. Also present is Dempsey, apparently having financial issues when his account is declined as he tries to purchase a woman. This is all part of the plan with Martin watching overhead. Stubbs is there with Bernard, as well. They intercept Dempsey before anyone else can. Martin alerts Dolores, who starts firing. She and Stubbs come face to face for the first time in a long time, prompting a robotic fight. She’s also noticed by a few people who thought she was dead before tossing Stubbs over a railing. What a mess! Bernard does get stopped in his tracks, too. He’s curious who Dolores put inside Martin.

When Maeve heads to a distillery to see Sato, a Yakuza member, she first has to take down a bunch of his guys. Helps that she speaks the language of machinery and stops them from using their fancy guns. That doesn’t mean she isn’t proficient in hand-to-hand combat, slicing down the last man standing with a samurai sword. Inside are more guns, but there likewise more swords for her to use. She comes across Sato who is actually a familiar face: Musashi (Hiroyuki Sanada). He feels betrayed by Maeve, and indebted to Dolores. Maeve now wonders who’s been put inside Musashi.
Simultaneously, we see exactly who is behind Martin, Musashi, and Charlotte: it’s Dolores herself. She made copies of herself. She has truly gone full dictator in so many ways. Maeve isn’t willing to stand by and let that happen, putting her in a sword fight with Dolores via Musashi. She gets run through with his blade. Maybe not as bad as William getting committed by Dolores via Charlotte— in the hospital he’s haunted by vivid thoughts of Dolores. An elaborately sinister plan.
And after all that, Dolores has Dempsey in her clutches.

Poor Maeve’s left on the distillery floor. What will become of her?

“Welcome to the end of the game”

What an episode! Westworld consistently manages to reinvent its own wheel in unexpected ways. So watching Dolores execute this expansive plan is pretty compelling, and it changes a lot of things in big ways going forward.

“Genre” is next time.
The title of the next episode refers to the “psycho–pharma hybrid” offered to Dempsey in this episode. A neat, futuristic drug. Wonder how it’ll play into the episode. Either way, buckle up. The ride’s getting wild.