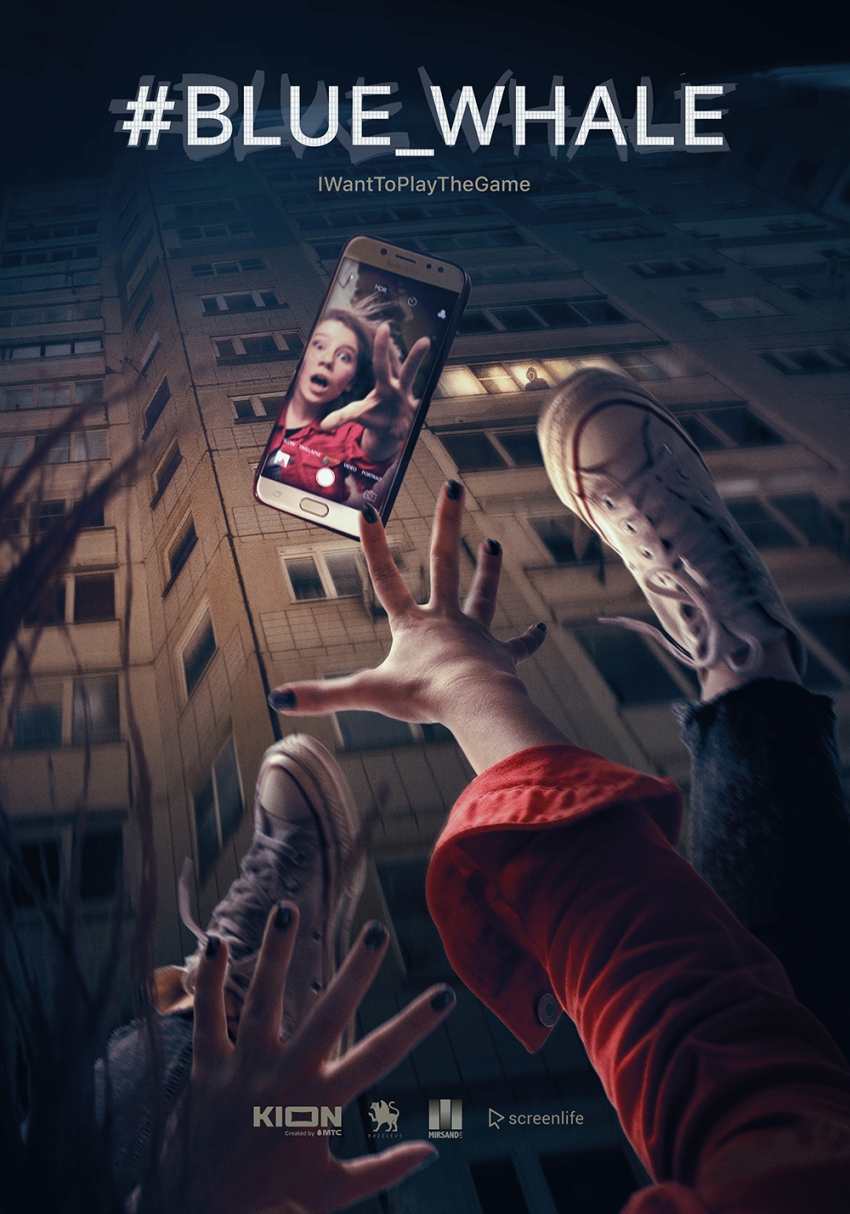 There have been some fun, if not disturbing screenlife horror films over the past fifteen years. A few of my favourites are the unsettling, occult-focused The Collingswood Story—an underrated, early take on the genre, if not the first of its kind—Unfriended: Dark Web, a sequel even better than its predecessor, and most recently Host, which proved not even a pandemic can stop the creativity of horror filmmakers.
Now we have Anna Zaytseva’s #Blue_Whale: a compelling, horrific screenlife film that, despite its slightly convoluted plot, uses internet urban legends as a way of exploring the dangers young people face online. For those who somehow didn’t hear about the Blue Whale Challenge, while its implications are terrifying, none of the suicides supposedly linked to the sick game have been verified. That’s all part of the plot, too; the story begins with a girl walking in front of a moving train, supposedly part of the game, echoing how the whole Blue Whale phenomenon might’ve actually begun in the first place.

Zaytseva’s film follows Dana (Anna Potebnya), whose sister Yulya killed herself. Dana digs into her sister’s online history, discovering that the suicide was apparently part of the Blue Whale online game. She poses as a hopeful player, getting accepted into the inner circle of a group whose leaders make the players complete humiliating and, later, violent tasks designed to break them down. Dana eventually finds things spinning out of control, and she nearly gets sucked too far into the game. That’s when everything changes again. New revelations force Dana to reevaluate. It may be fatally too late before she’s able to stop what’s coming.

Urban legends have been a staple of the horror genre, most specifically since the Golden Age of Slashers; so many of the hack-and-slash horror movies from the 1970s and `80s took bits of inspiration from urban legends about terrorised babysitters and unfortunate teens getting murdered at their local Lovers Lane. What I love about screenlife is some of these films have tackled internet urban legends. Most interesting is the way #Blue_Whale plays off the real internet legend of the eponymously-named challenge and simultaneously feels informed by other internet-related crimes. The Blue Whale online game is the obvious inspiration for Zaytseva’s film, though it likewise takes inspiration from the Momo Challenge hoax—another game similar to Blue Whale that has never actually been verified as resulting in someone’s death. The Momo Challenge specifically caused YouTube to address the situation and the company’s gone so far as to demonetise videos referencing Momo, including news channels. The spread of Momo has been difficult to stop, with the weird character Momo popping up as a skin in the game Minecraft, as well as in numerous video games made by indie developers. There are actually planned films featuring Momo on the way, one of which is being produced by Orion Pictures. The way Momo has continued to work its way into the veins of pop culture shows how urban legends actually can, and often do, have more power amongst the digital landscape.

When Dana begins to unravel the Blue Whale game and discovers it’s basically psychopaths pushing damaged, mentally ill young people into killing themselves, or outright murdering them, it conjures the haunting spectre of several prominent real life cases. Predators using the internet and cellphones to encourage others to kill themselves aren’t uncommon, sadly: William Francis Melchert-Dinkel was convicted in 2011 of encouraging two people into suicide; Megan Meier, among others, was cyberbullied by a friend’s mother until she hanged herself; and, maybe most infamously, Conrad Roy took his own life after his own girlfriend Michelle Carter sent a number of texts encouraging him to do so. The story behind Yulya is eerily reminiscent of real life. She gets sexually blackmailed by the Blue Whale ringleader. She’s threatened with consequences not unlike what happened to the victim in the Steubenville High School rape case, whose sexual assault was captured on film and shared online. The point being? #Blue_Whale may get messy by the end, but it’s a stark representation of real online horrors affecting young people.

Aside from the real life connections and parallels, Zaytseva’s film uses a kind of Gothic language to express various ideas. The way the leaders of the Blue Whale game talk about suicide feels reminiscent of a creepypasta. They frequently reference either “the Silent House” or “the Quiet House” as code speak for the players killing themselves. They also make reference to the final act of suicide in the game as “EXODUS,” compounding the Gothic imagery with a dash of religion. Then there’s the ghostly nature of hacking—a hacker’s like a digital ghost, able to move in and out of your home unseen, haunting your hardware—which we see best in the creepy, ghostly mask of a murderer who is, for all intents and purposes, a predatory hacker. Again, the mask is reminiscent of a picture you might find on creepypasta, or if you searched the word creepypasta on Google; of course the picture itself, as we see in the film, does come from a random Google search. There’s a ghostliness to the mask because of its look, and in how it’s this random picture of unverified origin, a spirit plucked from the online ether for the sole purpose of terrorising somebody. The best instance of digital ghostliness is when Dana uses her Yulya’s profile to make a video call, frightening her friend, who says she thought it was a “call from the underworld.” This moment gets played as a bit of comic relief. Yet, in theory, like in the first Unfriended film, someone could digitally reanimate the dead by using their profile and haunting others. 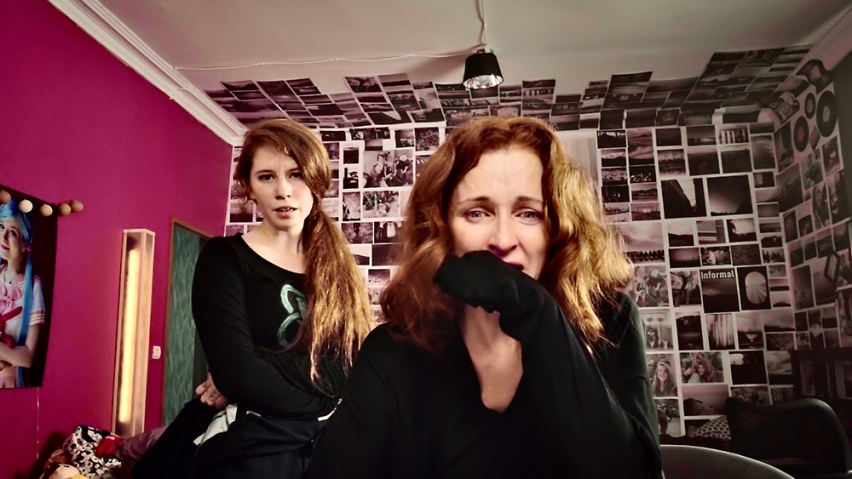 Any story that tackles the darker side of the internet is automatically in conversation with people who want a totally free, Wild West-style internet. The reason being, freedom on the internet also, unfortunately, means accepting the darkness that comes along with it. I, for one, am on the side of online privacy, especially when it comes to the capitalism of big brands trying to turn us all into perpetual, passive consumers, or the government wanting to spy on us. However, the reality is total freedom online means there’s also a space for all manners of horrible people to do what they want, from pedophiles to the sick kind of minds in #Blue_Whale convincing young people to harm themselves. People often like to say that online life isn’t real life. That’s true, only in the sense you’re not physically inside the internet, walking around. It’s just as much fundamentally untrue, because we know how much power can be exerted upon people from across town or even across the world through digital reach.

The best way Zaytseva illustrates youth in danger online is through one of the people manipulated into the Blue Whale game being a pawn used to torment others. This character is a young girl with an abusive dad. She laments police incompetence when she tells Dana it’s useless to call the cops on her father: “They will let him go, they always do.” What’s interesting, and tragic, about this character is how she depicts the way an offer of power to a vulnerable, abused person can create new villainous ways for people to find solace in bullying. In the offline world, bullies can do lots of damage; online, bullies can do the same amounts of damage, or more, and potentially all without ever being seen doing it.
#Blue_Whale touches on so many different difficult topics about the problems youth deal with online. One of the most relatable aspects the film explores are the dynamics family can play in those online difficulties. Dana’s mom complicates both of her daughters’ lives. Dana chastises her mother for having expectations that Yulya couldn’t live up to: “She thought it was better to die than to tell you the truth.” Yulya and her suicide, after we learn how she was being blackmailed, show how much harder it is being a girl/woman in a digital world. In an age of online manipulation it can be devastating for girls who are just beginning to figure themselves and their sexualities out, and parents already push their expectations about girls and their bodies on their children, even if inadvertently. The relationship between Yulya and her mother, as well as Dana and her mother, shows how the pressure parents put on young girls in the 21st century can manifest dangerous, destructive results in their lives.

What Zaytseva’s film does by the end is unravel the Blue Whale urban legend, choosing to focus on the actual hard truths and brutally ugly realities of social media and how it can, and does, place many young people at risk; not at risk because of mythic suicide games, but due to their vulnerability in the paths of sadistic predators with free reign on the internet. While the whole film’s generally a warning about the online terrors facing young people, the big reveal near the end of who’s been leading the Blue Whale game speaks as a warning to anybody online, regardless of age, that identity in a digital world is beyond nebulous. We can’t even know people fully in real life, no matter how well we think we know them; I thought I knew a family friend well, then over a decade ago it came out that he’d been sexually assaulting young boys for years without repercussions, and I realised that you truly can never know someone 100%. This is all complicated more by the nebulousness of identity online, where anybody can make an account and hide behind anonymity, to be whoever they want and do whatever their sick mind wishes.

The leader of the film’s game has made use of multiple identities as an internet hideaway, allowing him to get close to Dana and those in her life, haunting her offline and online alike. Anybody with the time to learn how can infiltrate our lives digitally, which can further let them infiltrate our offline lives. As adults we have years of experience and learning at our disposal, especially those of us who were alive before the advent of the internet as we know it today. Young people haven’t figured out the world yet, and we let them float through a dangerous, disturbing digital existence without the tools to protect themselves. #Blue_Whale might sensationalise at times, but it’s genuine, horrifying, and serious in its depiction of the way youth are at risk just by connecting their phones to wi-fi.