John Sr. is seeking to ingratiate himself to Strand, hoping to change things around the Tower. He keeps seeing Strand and Howard go about their awful business. He’s practicing how to approach Victor with June, and he knows that if things aren’t fixed soon it can get a whole lot worse. Meanwhile, Charlie’s not well after what happened and June’s doing everything possible to make the girl comfortable. Then John’s told another walkie talkie has been found and this time it was found amongst Howard’s things. Just might provide John the opportunity he requires to get into Strand’s head.

Soon it’s Howard being held over the side of the building, being questioned about his loyalty. Strand’s certainly not happy, willing to let his “old friend” get tossed. But Howard insists the walkie was a plant to make Victor doubt his loyalty. Now Strand wants proof, if that’s really what went down. At the same time, John receives word that there’s a problem: Baby Mo is missing. Howard offers to go find the baby; Victor allows it but also charges John Sr. with finding the child, too, in case Howard is hedging bets. 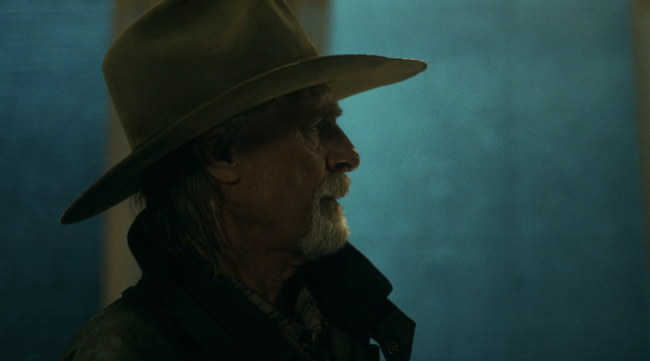 John sits down first with the nanny, then with June and Grace and others, as well. He’s using all the old cop skills to suss out any information he can find. He wants to find the baby and simultaneously get in Victor’s good graces. June thinks they have to take out Strand rather than play along with him. She says Baby Mo is the leverage Victor has, because while the baby’s there they won’t experience any attacks from Morgan. She tells John to keep Howard distracted. She doesn’t admit to anything else, though. But we know she’s just trying to be smart about things.
Next, John Sr. talks with Howard while standing amidst all the American history collected in that room. He asks Howard personal questions about family, which seems like touchy subject to the latter; Howard’s wife left him before the world as they knew it ended. Howard mentions the Travis Letter and forging an addendum. He was found out and his wife left. Now, he’s surrounded by all sorts of history.

After John Sr. noticed mud on June’s boots earlier he figures out where she is, as well as where Baby Mo is, down in the Tower basement where June’s preparing to flee. Great time for a flash flood! This busts out the gate, sending the walkers free, and putting the two living folks in grave danger . June and John Sr. block themselves in with Baby Mo using the gate, but they’re caught, and Sr. tells her they have to take the baby back. This way is far too dangerous. Plus, John orchestrated the walkie stuff with Howard. He’s working towards fixing things. Yet June worries John Sr. is making the same mistakes he did in the past all over again.
Right now they just have to get safe again, away from the chomping, soggy zombies. Bad ass June puts on her gear and fights the zombies back while John Sr. takes Baby Mo. She wants John Sr. to go but he won’t leave her. They need help from whoever June’s had helping her; that’d be Grace. John Sr. takes this moment to show off a radiation poisoning he has, explaining he doesn’t “have much time left.” He urges it isn’t safe outside the Tower and he wants to make it safe there for Baby Mo, among others. After a while, Strand and Howard show up, having caught Grace about to come down there, opening a whole new can of worms. Although Strand still considers John Sr. the one to find Baby Mo, which is technically true. 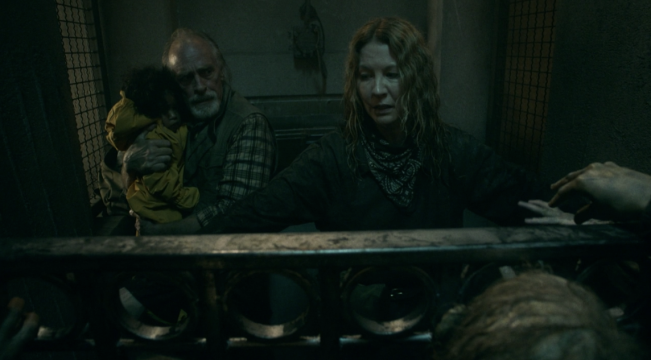 On the roof, Strand wants John Sr. to push Howard over the edge of the Tower. So John admits to planting the walkie, and that amuses Victor a little, only impressing him rather than pissing him off. The Tower’s leader appreciates John Sr., and now John follows through, tossing Howard off the roof. After it’s over, Strand tells Sr. how he found out that Howard’s family was dead and never told the man. It’s dawning on John Sr. just how depraved Strand really is, but he’s in too deep to back out now. And we know that Sr. is a man who tries his best to be moral, at least after what he did in his past. He’s someone who WANTS to be moral. So the fact he tossed Howard off that roof doesn’t sit well with John, neither does moving into Howard’s history-filled apartment. And then he’s back to alcoholism.

Strand has decided “things need to change.” He’s remanding Baby Mo to his sole custody. Nobody will interfere anymore. And John Sr. is in charge of making sure nobody ever takes the baby. He tries to give Strand a little parenting advice but it falls on deaf ears. Will he now understand there’s no changing Strand? Yes, because he knocks Victor out with a pistol. He’s changed his mind. He’ll take Baby Mo to Morgan. He even uses a bunch of the historical war memorabilia in Howard’s room to suit up for the journey. So he says goodbye to Grace and the others, then heads off on his own with the baby under his armour.

Victor and his security people are on the lookout for John, but the old man’s gone, working himself through a horde of zombies, even spotting zombie Howard along the way. Atop the roof, Wes and Strand spot John out there; these two might be new partners. Strand asks Wes to go fetch an antenna downstairs.
After some time, John makes it to Morgan out there while soldiers round up the traitors, Grace, June, and Wendell. Sr. hands Baby Mo off to Morgan and then we see he got a zombie bite in the course of his short journey. Oh, no… I loved John Sr. just like I loved John Jr. It’s always sad to see such a loveable character go on this series. Goodnight, sweet prince.
Victor uses the antenna to call Morgan, letting him know that “the war is just beginning.” He threatens to kill the others if Morgan steps inside the Tower. He calls out to the wasteland for more recruits. Sad to see Wes buy into Victor’s method of things when it’s just fascism and murder, yet he sees Alicia as some kind of bad person who gets people killed. Then again, the wasteland makes a lot of people do a lot of dumb things.