Two men, who've been best friends for many years, discover a new relationship through a VR video game.

Not usually a fan of Marvel movies, this one thrilled me with exciting action & a surprisingly well-juggled ton of characters.

Ever since I saw Ghosts… of the Civil Dead, director John Hillcoat was someone I found interesting. 17 years later, he made The Proposition, which is my personal favourite Western ever, and definitely one of the best contemporary Westerns of the past 20 years. Since then he pulled out a near perfect adaptation of Cormac McCarthy’s The Road and also did the solid, fun Prohibition dramatic thriller Lawless. He is an interesting talent as a director, whose talent lies in getting down to the nitty gritty of his subject matter, whether that be prison, the end of the world, Prohibition heroes, or even the law.
Which is where Triple 9 comes in. Tackling a lot of different subplots at once, this is a pretty solid crime movie. Although, there are definitely a few faults. For one, the usually wonderful Kate Winslet is present giving us a Russian-American accent that is once or twice solid, then for the rest of the picture a truly abysmal element. But even with the few missteps, the screenplay from newcomer-screenwriter Matt Cook is interesting, it is suspenseful, and above all the world of dirty cops feels impressively real. The terror of being in the midst of renegade lawmen is very real in Triple 9. A good cop flick for our current times.

A gang of corrupt cops and criminals including Michael Atwood (Chiwetel Ejiofor), Marcus Belmont (Anthony Mackie), Gabe Welch (Aaron Paul), Russell Welch (Norman Reedus), & Franco Rodriguez (Clifton Collins Jr) all find themselves indebted to the Russian mob. Particularly, because of Michael’s son with Elena Vlaslov (Gal Gadot), he’s stuck with her sister Irina (Kate Winslet), big time mobster, over his shoulder. After a bit of a botched heist, they’re expected to do one more job. A high stakes job, which will require them to pull a Triple Nine; code for when an officer is down. This will pull all units away, allowing others in the crew to infiltrate their target.
With a new cop in his precinct and as his partner, Marcus offers him up as the one to take down – Chris Allen (Casey Affleck). Only problem is that his uncle Jeffrey (Woody Harrelson) is a big name around the city in the Police Department. And with too many loose threads, a plan, no matter how good, is bound to go wrong somewhere down the line. 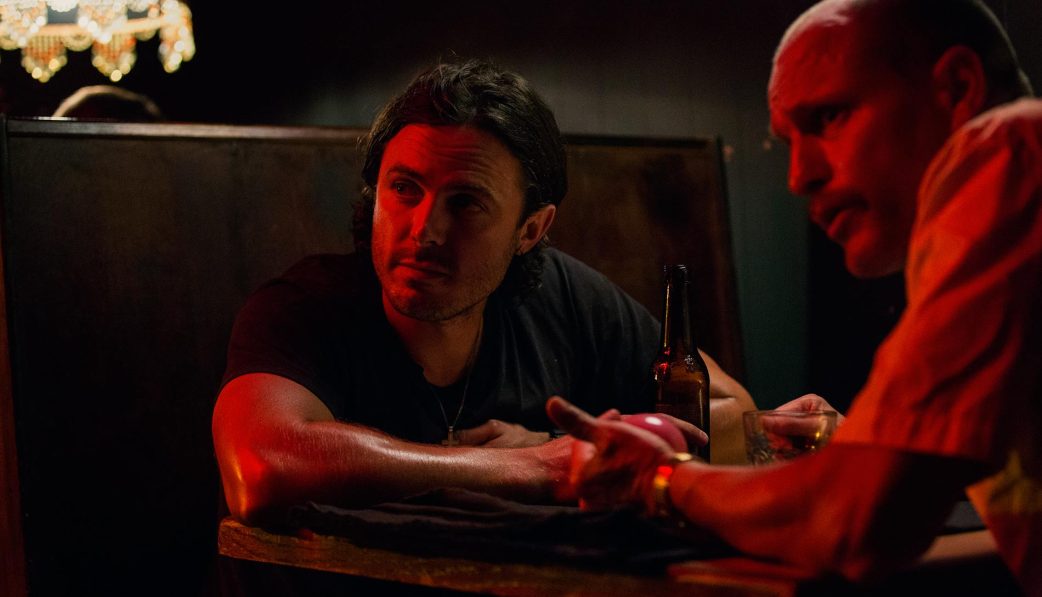 The action sequences are absolutely the film’s highlight. Right from the start, the opening robbery is super exciting. Especially after you see things going wrong for these guys, then figure out they’re cops. It’s a real whopper to start off the movie. Halfway through there’s a nice sequence where the police raid a Mexican gang and the action is stellar. Lots of great shots, very kinetic. On top of that, I love the film’s score from an awesome team including Bobby Krlic, Atticus Ross, Leopold Ross, and Claudia Sarne. A nice electronic, subtle score that bubbles and boils up, bouncing around just like the action. Fits things well.
The cinematography overall is fantastic, from action sequences to the lower key scenes in various locations, all framed so beautifully, so dark and vibrant. Cinematographer Nicolas Karakatsanis is a favourite of mine. He is responsible for the look of a top film in my books, Bullhead, as well as The Drop and recent horror Cub. His eye is good, and the texture of his camerawork is so rich. Whereas the action scenes are definitely best, some of the others where the camera is very still, exquisitely framed, fill out the other portions of the film in a nice tapestry that takes us from the dangerous streets to dingy strip clubs, secret meetings under overpasses, to alleys and crack houses, and everywhere in between. The whole movie is atmospheric. It has a dark tone, a deep moodiness about it, most of which comes from Karakatsanis and how he captures everything. As the film wears on and we hit the climax, the cinematography is much more personal, close-up, and it hones tight on everything. Whittling down much like the characters do in number.
For the most part, Cook’s screenplay is good. There’s a hole or two now and then, which is fine. Nobody’s ever made an objectively perfect movie, and even the greatest screenplays all have little messes in them. But best of all, the plot and story come together with all their various threads nicely. For a film that has a lot of focus in different directions, Cook manages to keep our attention in the right spots. Never does one subplot ever overtake the whole film’s main plot because the whole thing shifts from one act to the next until we’re left with the aftermath of these cops and their decisions. Things weave around quite a bit at times. Without spoiling anything, the cops find their plans don’t exactly work out as they’d hoped. And once things begin spinning out of control there’s no turning back – the plot will whisk you away towards a violent finale. 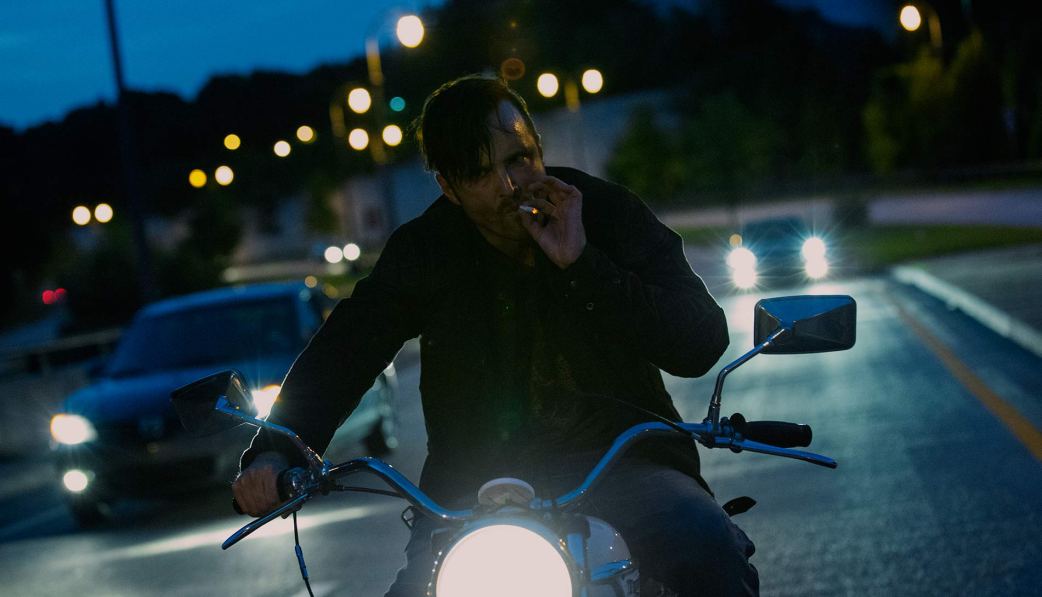 Triple 9 is able to stay so interesting despite its few flaws due in large part to the well rounded cast. Someone I’m huge on is Woody Harrelson, so to see him here in a nice little supporting role is great. Even his voice is fun, but the character itself is great; he is kind of sleazy, yet he’s one of the better of the lot. Just little bits make him so fun: meeting with a transsexual, played wonderfully by Michael K. Williams, and slapping her ass; picking a joint out of the garbage; snorting some drugs in the backseat of a cruiser.
Someone I love while not actually loving a whole of the movies he’s in is Anthony Mackie. I’m always rooting for him to get better roles. Here, he plays a dirty, dirty police officer. All the same, he’s not completely worthless, as his character’s at least partly conflicted sometimes. You can see him wanting to like Affleck’s character, they bond a little, and Mackie plays that role so right, with faint hesitation and plenty of emotion. On the other side is Casey Affleck, another actor I personally enjoy. He has this laid back sensibility about him, some take it as disaffected or boring, but to me it’s just his attitude. His behaviour works proper here because he’s supposed to feel apart from the other cops in the film; he’s sort of cocky, but not in a disingenuous way. Him and Mackie have nice chemistry together, as well as with Harrleson in their few scenes.
Aaron Paul is great, too. Part of his character is similar to Jesse Pinkman from Breaking Bad, but not the entirety. This character, Gabe, was a cop who fell off the track, like crazy. He’s a hardcore addict. And still, there’s a tiny drop of humanity in him. Paul is the perfect casting for this role because he’s able to be a dirtbag drug head and simultaneously play the character as sympathetic, honest, raw.
In addition to these solid performances, the cast is filled up with other great actors. Ejiofor gives an uncharacteristically menacing performance, proving he is not only a nice guy actor. In his brief performance, Reedus is, as usual, charismatic in his rough and rugged way. Clifton Collins Jr is another guy I always love seeing, and here he puts off his gangster cop persona just the right amount. And yes, Williams as Sweet Pea, the glamorous transsexual, is a welcomed addition even if he’s only onscreen for about a single minute. The cast makes this movie what it is. Kate Winslet adds nothing with her bad accent because she doesn’t feel menacing to me – not like Ejiofor, who strikes the right amount of scary bastard. But if it weren’t for the rest of these actors, Triple 9 would be highly mediocre crime-thriller fare. 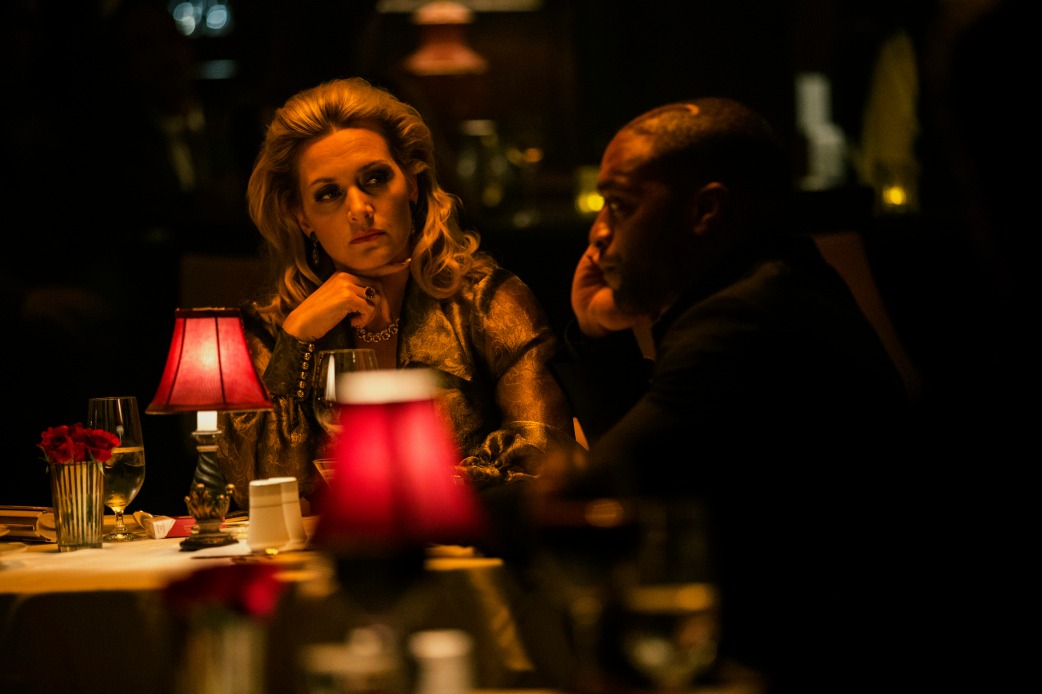 Some reviews I’ve seen are unfair. This is definitely not one of the best crime-thrillers I’ve seen as of late. At the same time, this is still solid. The action is exciting, it will push your adrenaline in certain scenes. It is tense and rarely, if ever, lets up. Also, you have to admire some of the methods these criminals/cops use in their robberies. A few nice, innovative little pieces to add into the movie lexicon. Any decent movie about criminals, especially ones where the criminals are cops and ex-military, so on, is going to have some nice tidbits of criminal activity. For instance, just some of the small moments where they tried covering their tracks, even the fact they spoke Spanish during the first heist and those types of things were nice inclusions. One absolute positive – Hillcoat does a fine job directing here and offers up more with this feature than others will have you believe. Don’t expect the next Heat, but don’t write this off as mediocre. It’s better than that. For all its mistakes, Triple 9 is dark and engaging. Maybe in a day and age where dirty cops are all too prevalent in real life some don’t want for this type of movie. Doesn’t change the fact it’s enjoyable.