Generally, I’m an internet critic whose standards aren’t overly picky. If you’ve ready more than a handful of my reviews you’ll probably notice I’ve given out more 5-star reviews than others might in their own. But I don’t necessarily mean a 5-star film is always perfect; part of my judgement, as any of our judgement is, comes from a subjective place. You can never get rid of subjectivity. However, even while I try to give certain films a break for little nitpicky things there is a limit to my understanding. I’m not going to give a shit film a great rating. I just try to cut filmmakers some slack; it isn’t easy to make a great movie.
When it comes to movies like Another, there’s only so far my sympathies extend. I’m a sucker for possession movies, or anything to do with Satan (mainly because I don’t believe in any deities or any of that stuff and I can just enjoy the darkness for what it is). There are plenty movies out there tackling demonic possession. A good many retread the same trodden area as the last, too many doing home to or straight copying from William Friedkin’s The Exorcist. The great horrors about supposed possessed people, and the entities possessing them, are few and far between. Another simply tries to mash too many things together, including too many changes in style, changes in tone, and the massive overuse of particular techniques that drive home the message that everything in this film tries too damn hard, paying off with nothing more than a couple fleeting moments worth watching.

A baby is carried by figures in black hoods and robes. A dark ceremony commences.
Cut to 18 years later. Jordyn (Paulie Redding) is celebrating her birthday with friends. Although, her Aunt Ruth (Nancy Wolfe) is being creepy. She brings up the fact Jordyn’s mother was at the same age as the daughter when she passed. Then Ruth goes ahead and stabs herself, screaming that “it‘s time.”
From that moment on, Jordyn finds her life changing. She spirals into a terrifying word of demonic possession, strange desire, and so much. Soon, Jordyn becomes aware that she may just be a relation of the devil himself.

The most grating thing about this movie is the fact half of it, at least, is filmed in slow-motion. Honestly, it is crazy. Never have I seen a technique so brutally beaten over the head of the viewer. At first before the slo-motion kicked in, I actually enjoyed the dark, sort of washed out look. But then it starts, and scene after scene is slowed down ridiculously, offering no sort of evidence it’s even used for a particular reason. Simply put, writer-director Jason Bognacki obviously couldn’t figure out a way to make it look unique, so he piled on the slow-motion. I hate to rag on a director so badly for something. It’s a really poor choice, though. The entire film drags on because of its overuse, and the repetition will just dull you to tears.
Even worse, there’s no practical work (re: effects) worth talking about. And I’m sorry to the filmmakers out there who may feel otherwise, but if you do a horror film especially and you have no practical makeup effects, instead opting to CGI things to death, then there’s no way I’m going to enjoy it. At least not to the point I’ll want to watch it again. Even if it’s half-and-half, I can dig that. In opposition to all that, Another goes for about 90% CGI and maybe, MAYBE, 10% practical. And those practical bits are so minute, I’m probably overselling it by saying there’s ten percent worth. Either way, even the CGI’d stuff looks bogus, including a terrible little showdown between two old women that could’ve been great yet comes off like some of the worst stuff from the 1980’s. 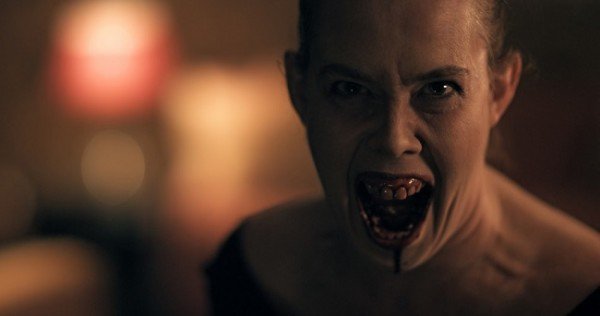 With a bunch of awful performances, a ton of terrible effects, as well as a story that meanders from one place to another trying to cram several sub-genres into one, Another a.k.a Mark of the Witch is one of the most unforgettable movies I’ve seen in ages. There was nothing I could find here worth the time it took to watch this dud. I’ve given it 1 single star, simply because I liked the beginning, the very end, and there’s a tiny scene after the credits which looks good. Other than that this is truly dreadful horror cinema. I never like to shit all over a film, but this one isn’t worth talking up in any sort of sense. Jason Bognacki tries his best, however, it’s almost as if he tried too hard, in too many different directions. Never does the film come together properly, which is a shame. As I said, I do love a good possession horror, or anything with the devil, witches, et cetera. This simply comes with nothing much for me to be impressed by, so I can’t push myself to try praising Bognacki, or anyone involved with the film. Want a better Mark of the Witch? Try the Mark of the Devil. Not at all the same, but whatever – better than wasting your time trying to slog through this unpolished bit of horror rubbish.

This infamous 1971 Ken Russell picture will forever live on in wonderful heresy.