Let’s get one thing straight: I love this movie. Fanatically.
I’ve also got problems with it.

There are vast differences between the source material of The Shining and Stanley Kubrick’s film adaptation. For a man who mostly got close to horror in a psychological sense before this 1980 horror classic, it’s a strange pick for the master director. At the same time, it’s also a good fit. While this is mainly a ghost story, the clinical way in which Kubrick attacks the subject matter and thematic material really brings out the horror of the human drama at its core. Famously, Stephen King has said the movie is “cold” whereas his book was “hot“, and that Kubrick wasn’t capable of telling the story how it was meant to be told.
And in part I agree with Mr. King. Because the book is better. However, I do find Kubrick’s film a slice of terror. Further than that, to me the supernatural element of King’s original novel is still there amongst everything. It’s simply that Kubrick takes that all and envisions it in very human terms. We absolutely see the haunted elements of King here, there’s just a completely different element to this film and how it perceives the story of Jack Torrance’s madness.
If King’s novel is about the supernatural forces of The Overlook Hotel taking its toll on the Torrance family, Kubrick’s film is a ghost story that’s most of all an allegory for personal family troubles, the failure of people to face their problems head on until they all but literally haunt them, as well as the attempts of many to bury the dark secrets of their past like the various murdered souls haunting the halls of The Overlook.
Perhaps a straight adaptation, such as the lesser but still enjoyable TV version King had a hand in, is more enjoyable to some. And though there is a part of me that faults this movie for not going directly at the source material, because there’s some great stuff there that didn’t make this cut, Kubrick most definitely made an impressive horror film that not only contributed to the genre as a whole, it also left an indelible mark on many moviegoers. To this day, I can close my eyes and almost imagine the entire film front to back because of how many hundred times I’ve seen it.

One of my biggest beefs is the change to the character of Wendy Torrance. I find Shelley Duvall an intriguing actor, and she gives a knockout performance here. Still, the character bothers me. In the book she is nowhere near as waif-ish and frail as the Wendy which Kubrick and Diane Johnson wrote. And that boggles my mind, really. Because there’s absolutely no reason to change her character into such a “dishrag“, as Mr. King so eloquently puts it whenever asked. What gets me most is that this Wendy does not seem the type to stand up to her husband. She talks of having asked Jack to stop drinking, or else she would leave, and this doesn’t strike me as genuine with this character. She can barely hold steady ground in a conversation with her husband. Let alone confront his violent temper and alcoholism. In fact, the way Kubrick and Johnson have written Wendy is, as King again has noted, fairly misogynistic. There are barely any moments of strength in Wendy, which bothers me. It is so far from the character in King’s novel that it makes no sense. Changing the themes and focusing more on the human drama of alcoholism, the effects it has on a family, the bad decisions of the patriarch looming over his family, so on, all that makes sense to me. An adaptation doesn’t always need to follow copy-for-copy the source material. Many adaptations do well to stray a little. But this character change doesn’t come as genuine, as if Kubrick and Johnson solely wanted to focus on Jack and his son, and so they let everyone else fall to the wayside.

The character of Jack remains virtually the same across King and Kubrick’s respective visions. Again, though, I do agree partly with King. I love Nicholson here. He kills the performance, no doubt. I just can’t help imagining the role with someone less Nicholson-like. In that Jack definitely looks a bit off right from the beginning. That signature Nicholson look, the eyebrows, the sly smile, it reeks of insanity too early. This takes away part of the impact, in my opinion. Furthermore, the screenplay as opposed to the novel doesn’t give us a lot of time with Torrance before he’s going mad. He’s very quickly a dick and then soon a real terror in this movie. It’s no less shocking how insane Jack Torrance gets over the course of the film. However, if a lesser known or different-looking actor were given the part it might’ve been an even larger surprise when he goes off the deep end later. Still, I can’t fault Nicholson; that’s all in the casting. For his part, he turns Torrance into a deeply troubled man, one whose intentions are good but whose execution leaves something to be desired. And regardless of Nicholson’s crazyface, he is able to draw us in. Specifically, the scene in the big lodge room where he backs Wendy up the stairs is EPIC. During a theatre class in high school, I recited that whole speech and had great fun. It is a superb, small monologue that Nicholson really nails, allowing us to fall headlong into the madness of Torrance. As the film picks up faster and harder towards the end, Nicholson definitely frightens and his performance will always rank high on any list of spectacular acting from horror movies.

The macabre beauty of The Shining is part of its everlasting appeal. All of the imagery is so well shot by Kubrick, photographed by John Alcott. Having a horror film captured through the eyes of Kubrick is magical. From the sets and the meticulously composed shots to the score and soundtrack, this film is every bit a classic. Maybe it doesn’t follow all the rules of horror set before it. Maybe it doesn’t follow King exactly. But I’ll be damned if it’s not amazing. And the horror itself is almost vicious. That scene where Jack finds the woman in the bathtub is something that has scarred generations of film fans. Even as a seasoned horror veteran I find that one moment intense and scary. There are moments of dreadful suspense throughout The Shining that, no matter how many times I’ve seen it, still hold me in fear. The elevator of blood is an iconic piece of imagery because it essentially sums up The Overlook, as a hotel completely immersed in blood, so much so it pours down from the floors above. Just the fact they accomplished that shot is enough to make it utterly mental. But over and over, Kubrick manages to derive absolute horrific madness out of his scenes through the way he captures things, right down to editing; the bathtub woman scene is so profoundly shocking because of how it repeats itself like a memory several times as the corpse reaches out after Jack and he backs away. There are so many fine touches which make this a work of horror that stands the test of time. 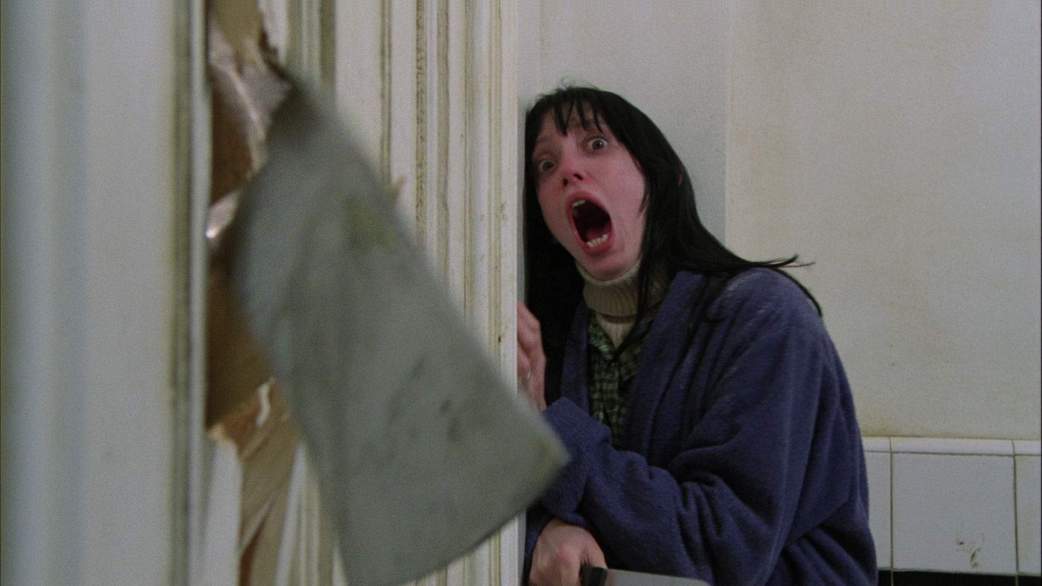 Much as I love The Shining, there are certainly issues. Some can pass off Stanley Kubrick’s mistakes by saying certain things to point to his hidden meanings, the deeper layers. Bullshit. As great as this horror is, as much as its done for the genre overall, there are faults. You can still find a movie incredible while admitting to its mistakes. And I don’t always agree with Stephen King, though here I do and find the book much better. Still, Kubrick’s The Shining is chilling, it is meticulously drawn out with great cinematography, practical special effects, and the eerie sounds sitting below all the engaging, terrifying imagery. Despite its flaws, this is and always will be one of the classic pictures in horror bringing Kubrick and his sensibilities to an unlikely genre.