A look back at David's mother Gabrielle and his father Charles Xavier.

Documentaries are everywhere, on every sort of subject. Anything in the world you can think of, there’s probably a documentary on the subject. Certain documentary films interest me because of how I connect with them personally, others are just intriguing and interesting topics that will draw me in.
The Devil and Daniel Johnston is one of the former types. I’d never actually heard of Daniel Johnston before this movie. Other people I know had heard of him, but not me. Either way, I dove into this documentary because I knew that Johnston suffered from mental illness; that’s the single thing I knew of him. Identifying with him, as both a hopeful artist and a man trying to negotiate life with a severe form of depression, this film spoke to me. While I’m not a fan of all his songs, there are pieces of music here and there which really reach out to me. More than that, to see Johnston struggle through being an artist, growing up, living life, all the while battling manic depression desperately. There are moments you might find yourself grinding your teeth sitting there almost feeling the pain. Certain scenes are funny, lighthearted. A huge mixed bag here that collides into making one of the most personal, wrenching, devastatingly awesome documentaries about a musician you’re likely to ever see.

The most fascinating part about Daniel Johnston is the fact of his own rawness, his real and unabashed open qualities concerning his personality. At one point, on MTV no less during 1985, he tells the camera: “This is my album Hi, How Are You? and I was having a nervous breakdown when I recorded it.” He says it in such a matter-of-fact way that it’s hard not admire, or laugh, or smile. In just about every last scene where he’s talking, you find him divulging the most personal, inner secrets about the darkest corner of his life. And coupled with that, the way Daniel performs is different than anyone else I’ve ever seen. You can witness both the intensity of his musical ability, as well as his wildly nervous personality. He is visibly nervous each time a performance comes up, from his younger days to his later shows. Always there’s this fear inside him, which is actually endearing a lot of the time.
So it’s no surprise when, later, Daniel ends up having an actual serious breakdown. He becomes violent and crazy after experimenting with acid/LSD, which first began at a Butthole Surfers show. Slowly things deteriorate, as Daniel starts to get arrested, the police have altercations with him, he even causes disturbances in his family. Then there are various struggles. There were people who worked for him/with him, re: his career, who all tried their best to help him, whether that was committing him to a mental institution or getting him shows to play or whatever else could’ve been done. All the while throughout the history of Johnston, we’re seeing edits of him talking in various recordings (from dubbed tapes he did himself to video shot of him by others). It’s a strange conglomeration of things coming together to present his life to us. Best of all, even in the most intense, scariest moments of discussing Daniel and his condition, director Jeff Feuerzeig preserves a sense of respect and delicacy that shelters us from looking at Johnston like a freak. He isn’t, especially considering how mental illness is becoming less and less stigmatized today; this is a raw and honest look at someone’s struggle. But again, it doesn’t come off as “Look at how fucked up Daniel is“. There is a tenderness about the way Feuerzeig offers up glimpses of Daniel and his difficult life. 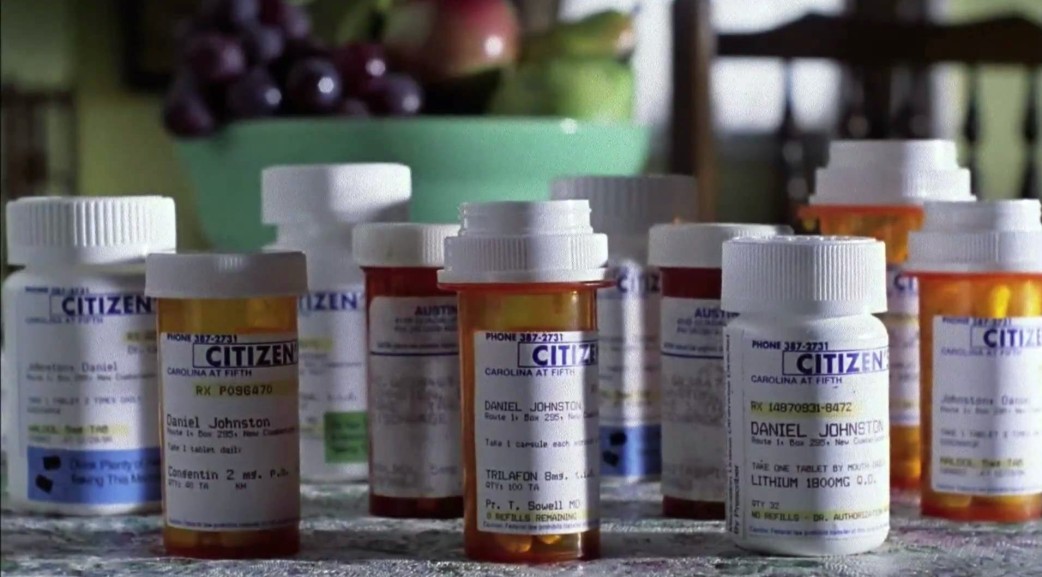 You’ll find it hard to deny the power of this documentary. No matter if you hate Johnston’s music, or if you think he’s a genius (I don’t think; I do find him an incredibly unique talent), if you have a heart beating in your chest and a soul deep down inside, this film will absolutely shake you. In the last 45 minutes or so, the devastating details come out. Such as the time Daniel thought he actually was Casper the Friendly Ghost, took the keys out of his father’s small plane in which they flying and tossed them out into the air, prompting his dad to make a crash landing. Luckily, they made it out of the situation with only minor injuries, but to think of what could’ve happened. It is a really frightening thought. That’s one of the turning points in the documentary, as not only do we realize the extent and depth of his illness, we also see a slight change in Daniel. Shortly afterwards, he starts to come down out of his religious fervor, his hallucinations and other similar delusions. He probably didn’t lose his faith. He just understood the gravity of his own condition. Today, he still struggles with issues of manic depression, but I feel after some of the more insane moments in his journey, there’s a part of him which accepts all of the ups and downs, in one big package. We go along that journey. Maybe in the end, the documentary’s biggest aspiration is to show people the mania inside music. Often people want the crazy, unstable musicians out there doing their thing and entertaining, but forget the human people inside these celebrities, inside the fame, deep down at the core. The humanity can’t ever be forgotten; this, if anything, is what Daniel Johnston and the film of his life has to teach.

This is a 5 star, flawless documentary. One of my favourites ever made. Because despite what you may feel concerning Daniel Johnston’s music, you cannot watch this without feeling something. To understand the mania and depression of others it’s necessary for people to be open, honest, willing to expose themselves to the world. It just so happens Johnston is one of the people willing to open himself up, like a living cadaver, and through this film he allows us a window into the damaged soul inside him. There are so many depressed and mentally ill people who could benefit from people coming out, talking of their own illnesses, their own struggles. We see so much of the devastation of unchecked mental illness in The Devil and Daniel Johnston, but in a roundabout way Daniel lets us understand how severe depression (or other similar mental afflictions) can be conquered: through love, honesty, openness, understanding, and yes, a dose of medication. There’s nothing ever glorious about this documentary, perhaps something which sets it apart from a lot of other biographical movies about musicians. Just remember – it isn’t all about the music, it is about the man. That is a point this film makes, over and over again. You may want all the madness that goes into the music, but don’t forget the men and women behind the music, their lives, what brings them to their talent and what gives us the unforgettable songs they’ve made.