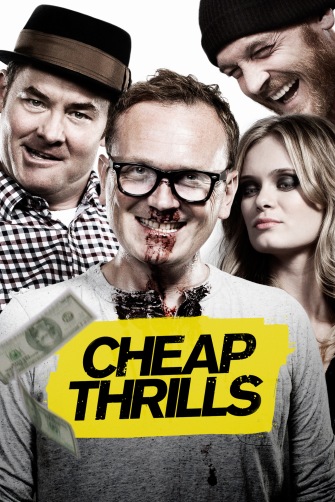 Cheap Thrills begins as Craig (Pat Healy) loses his low paying job. On top of that, he and his wife, as well as their new baby, are on the verge of being evicted from their property. After losing his job Craig heads to a bar for a few drinks. He ends up running into an old friend from high school, Vince (Ethan Embry), and the two catch up. They also come into contact with Colin (David Koechner) and his young wife Violet (Sara Paxton) who begin a friendly little game of wagers for big money. Seemingly the answer to both Craig and Vince’s problems, the two down-and-out old buddies go along with the childish little games Colin comes up with for cold, hard cash. Eventually, however, the games get darker, and more sinister. At first it begins with Craig getting knocked out by a bouncer, but soon it ends up with he and Vince breaking into houses. The evening gets crazier until the two former friends start wearing thin on one another, each of them becoming more aggressive with the other as the challenges get more intense, and they soon begin to regret what they’re willing to do just for money.

I think the two big performances here are most definitely from Ethan Embry and Pat Healy, both of whom I really enjoy in other movies. Embry plays a great character – at first you really find him fun and a bit wild, but eventually you start to see what kind of guy he really is and it is not nice. Embry really gets into it. I’ve been a fan of his since the show Brotherhood specifically, and he does very well with dark material, or at least characters who have some sort of darkness in them; great actor. Healy does a fine job, as well, playing Craig. The evolution of his character from beginning to end is wonderful. In the beginning, he is a truly meek individual, but by the end (especially the last shot which may be my favourite of the entire film) he really comes out the other side as a bad ass dude.

There are a couple really laugh out loud moments in Cheap Thrills and I think one of those is absolutely when Craig has the incident with his finger. I don’t want to ruin anything more than I already have, but this is just absolutely priceless. Between the way Vince acts, how Craig reacts to the finger incident, and Colin screaming “fuck yeah motherfucker” – it’s all just way too damn funny. I laughed my ass off during that scene.

While most of the comedy is quite dark, this is the sort of comedy I really love the most personally. There’s something really great when filmmakers can capture the hilarity behind grim situations. E.L Katz really could have done this as an outright horror movie, and believe me there are a few moments worthy of horror in here (maybe this could be called a psychological horror in some respects). Instead he keeps this a real dark comedy with dramatic elements and certainly a good dose of crime. I think the driving force behind Cheap Thrills has two significant parts: the friendship between Craig and Vince, as well as the overall competition in which they engage. Everyone can probably think of someone they might have a relationship with from high school similar to Craig and Vince – maybe not as contemptuous, but definitely someone you may not have as great of a relationship with in the present as you did in the past, and one that may cause tension. This just cranks those types of relationships up another notch. Combined with the fact these guys are desperate enough in their current life situations to go in on an increasingly dangerous and twisted game, this makes for great drama.

I think the whole game for money with Colin and Violet really works as a modern tale about greed. Although this is mainly meant as a great and thrilling dark comedy, it really does work on deeper levels. Similar to the recent film 13 Sins, Katz does a great job telling a story that relates to our modern society – a society filled to the absolute brim with people who will do anything they can, aside from work for an honest living, to make as much money as possible in as little amount of time as possible. The increasingly sick nature of the things Colin suggest for Craig and Vince to do is really unsettling. One part I really thought was a little funny but also sad, in regards to the game itself, is when they’re dared to eat a dead dog – they tie in the end and Vince asks Craig to open his mouth to prove his finished, to which his friend replies maniacally “I’m finished“, opening his mouth with an “ahh” noise to verify. It makes you chuckle while also feeling disgusted with these two guys. And it only gets worse.

This is absolutely a 4.5 out of 5 star film. To be honest, while he wasn’t bad at all, I think David Koechner was a weak link for Cheap Thrills. If someone else had played this character I may have been more intrigued. He did not do bad whatsoever, I just didn’t really get into his performance specifically. I suppose he served his purpose well enough. The whole movie is just great, though, and his performance didn’t at all take away from it in any real significant sense. I cannot recommend this film enough. Ever since I first saw this I’ve been raving to others about how great of a movie experience this provides. A lot of fun. Albeit, a bit of sick fun along the way, but totally worth the ride. Two amazing central performances and a lot of gritty, dark laughs make this a must-see film. One of the best releases in 2014 my way. I hope others will enjoy it as much as myself.