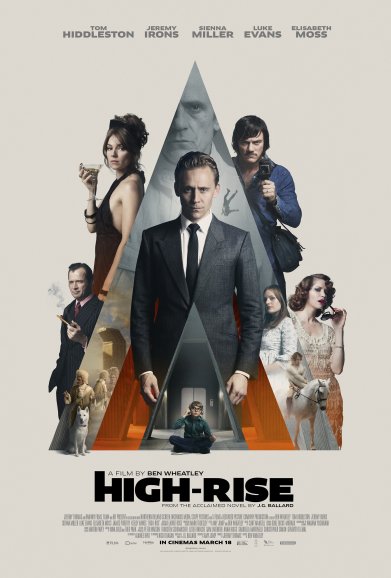 Almost from the opening, High-Rise caught me as impressive. Part of that is because I find J.G. Ballard’s writing beyond thought provoking. The other is because Tom Hiddleston commands an audience’s attention similar to the old school Hollywood leading man. And finally, a large part is due to Ben Wheatley. Ever since I had the chance to see his debut feature Down Terrace there was something worth the attention in his directing. It only got better as he moved through an excellently varied catalogue of films including Kill List, my personal favourite of his Sightseers, A Field of England, as well as some other projects. While each film is vastly different from the other his style is one an auteur. In each of his works there’s an existential question, of some sort, whether that be about family, loyalty, love, work, and much more. Writer Amy Jump has written several of his features, alongside Wheatley. She is also a great writer with an uncanny ability to look into human nature honestly, whose talents are solo here in adapting Ballard. A job she does well.
Together in High-Rise, using Ballard as the foundation and source, Jump and Wheatley explore an earlier view of the future. Yet for all its madness this story is certainly a great analogy for the war of classes in society, at any point. Particularly, though, in a day and age where billionaires are profiting the most, paying the least for their transgressions, as the poor end up footing the societal and economic bill, this is a book and film that holds as much if not more weight than first when Ballard conceived it.

Dr. Laing: “The facial mask simply slips off the skull”

It’s literally dog eat dog now. Or man eat dog. From the beginning, Wheatley shows us the resulting chaos. Similar to how Hitchcock spoke of showing his audience ‘the bomb underneath the table’, and then for the rest of the film letting people sweat it out wondering… when will it go off? So it’s a perfect place to start the journey. Now we’re left to watch as Dr. Laing (Hiddleston) and all the other inhabitants of the towering titular high-rise complex descend into the madness of their isolated, socially divided existence.
One of Ballard’s interests as a novelist lies in the convergence point between society and technology, between human psychology and technical advancements. In Crash, he examined a very physical space of body horror where the human body and the metal of cars meet in a disturbingly erotic nature. High-Rise examines a more psychological and moral space than anything physical. As everyone of all kinds is mashed together in the elaborate complex, which for all its space becomes more claustrophobic over the course of the film, the moral compass of its various residents and their respective concern for fellow people in different social classes begins to spiral. Downward. So in effect, Ballard’s main themes are that the higher we get in terms of technology, often the lower we get in social skills, but more importantly in social and moral empathy.
Laing is completely oblivious to his class privilege. He tells a cashier to keep the change, but she can only reply: “There isn‘t any.” Brief little bit of Jump’s excellent adaptation. A little later he’s completely humiliated at a fancy costume party where everyone’s dressed in centuries old party clothing. Then thrown out. A great juxtaposition of moments for Laing to experience.
Three big characters in High-Rise have significant names. Royal (Irons) – the main sitting at the top of the throne. Wilder (Evans) – the primitively violent man, arguably the first to fully succumb to the influence of the divided complex. Then there’s Dr. Laing himself, whose name is lifted from psychiatrist R.D. Laing, which connects with his concept of schizophrenia as a type of self-defense mechanism against certain social situations and events. They all play pivotal roles, as the isolation and almost blissfully ignorant nature of high-rise living (a microcosm of social structures) takes its toll in so many intensely brutal ways.

Wheatley often works with cinematographer Laurie Rose. In fact, if I’m not mistaken he’s essentially shot all his feature films. His eye for composition, alongside the directorial choices of Wheatley, always serve the best interest of the subject matter. Plus, he captures everything so rich and full that it jumps off the screen. No matter what type of things he’s shooting. From the bigger, more grand scale shots to the close, tight moments, Rose has a wonderfully classic sense of filmmaking. At times he and Wheatley go for experimental sequences, but mostly they craft a beautiful, old school-looking film that’s modern in theme. It’s a story that was written back 1975, likely started a little earlier, so Rose and Wheatley bring this interesting ’70s vibe to their atmosphere and look while exploring the modern themes in that space rather than update it completely to a contemporary setting.
You could easily see some filmmakers shooting this, as well as writing this, in a complete vision of future today. With the trio of Jump, Rose, and Wheatley, the J.G. Ballard adaptation they give us is the one which the author imagined, as a vision of the future in the 1970s. Everything, right down to the set design, is absolutely astonishing.
Then there’s Clint Mansell, whose work many recognize from his various collaborations with Darren Aronofsky among other scores he’s composed. He does fantastic things with a bunch of orchestral pieces, as well as the iconic electronic pieces he’s known for, too. The opening sequence is accompanied by some nicely fitting orchestra. Later, electronic scores pulse us towards the violent finale. Having Mansell a part of this team only makes the film more effective.

For me, this is a 5-star cinematic experience. Ben Wheatley, Amy Jump, Laurie Rose, as well as every one of the actors involved, particularly Tom Hiddleston and Luke Evans, each do a perfect job bringing this J.G. Ballard adaptation to the screen. Notably, this was previously deemed ‘unfilmable’ in Hollywood. So take that, big wigs. Wheatley continues an impressive career. He is a visionary director and every bit deserving of his status as an auteur filmmaker. Jump brings her wonderful writing to the table, and along with Rose’s keen eye they’re able to make Ballard palatable, exciting, and every bit as brutally engaging as his original novel. This is available as of this writing today on VOD. But I’ll also be heading out to see it on the big screen as soon as it shows up here. High-Rise is the type of film I’ve seen on VOD, I’ll see in theatre, then be damned sure I’ll buy up on Blu ray. Great cinema, great minds, great actors.