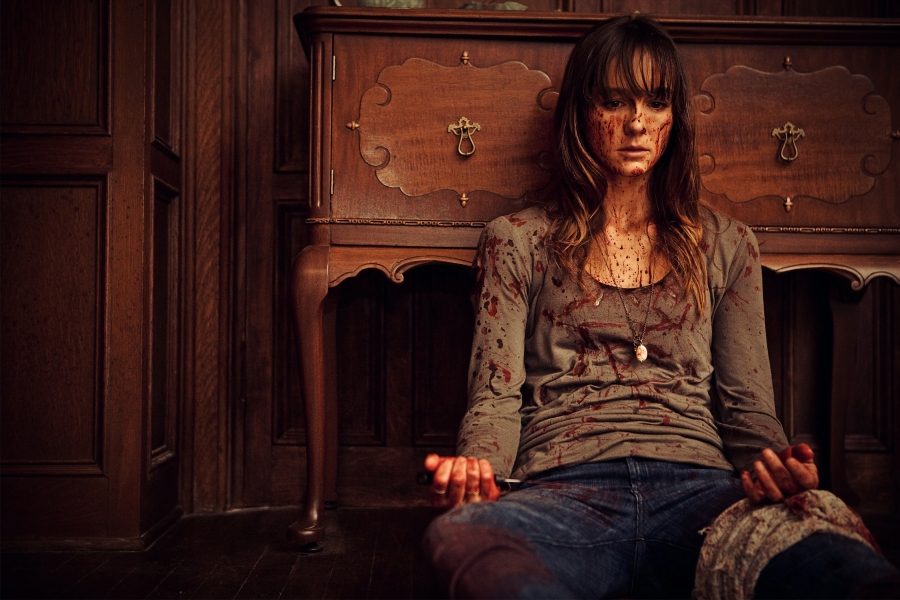 I’ve been into Adam Wingard’s films for a long while now.  Ever since I first got the chance to see Pop Skull (which I wasn’t huge on but thought showed a lot of promise on Wingard’s part as a director) I always made it a point to check out his films. A Horrible Way to Die really fascinated me. It was fresh and unique for a story about a serial killer. Wingard and Simon Barrett work well together. They both seem to have an eye for a certain type of horror; it isn’t all about the killing, it doesn’t go the modern teen horror route of showing tits and ass to gain a strange commercial appeal (which I myself don’t understand anyways). Barrett and Wingard manage to come up with new ways of looking at typical horror tropes. You’re Next follows in exactly that fashion.

The film opens up with a great cameo from Larry Fessenden. Later we learn he’s been cheating on his wife with a young woman. In these first scenes, both he and the lady are having a good time. A drink, some Dwight Tilley Band on vinyl. Then the masked assailants who will later terrorize the main characters show up and spoil the little party. A little blood, and the ominously scrawled warning of “you’re next” in what can only be assumed to be blood across the window. Everything is set.
Yet things don’t exactly play out as they usually might in other horror slashers. A family, a rich one in fact, is meeting for a family reunion. Before anyone else arrives, the mother and father (played by Barbara Crampton in all her wonder and a snooty Rob Moran) go up to their presumable summer home, although it looks like a home worth several million dollars. While there the mother believes she’s heard someone in the house. Things seem suspicious. Meanwhile, Crispian (the always interesting AJ Bowen) is bringing his new-ish girlfriend Erin (the kick ass Sharni Vinson) to meet the family. Once they all get together things seem fine. The rest of the family shows up. There is Crispian’s sister Aimee (Amy Seimetz) and her filmmaker boyfriend Tari (Ti West), as well as her other brother Drake (Swanberg) and his wife. However, soon enough things get tense. Specifically between Crispian and his brother Drake who argue like two spoiled little boys. Yet everything goes haywire in a matter of seconds. Out of nowhere Tariq looks out the window and is greeted by a high velocity arrow in the forehead. The mayhem continues.
This could’ve been a typical slasher film about a family being offed one by one. Barrett writes this differently. Instead, it becomes less about the horror tropes like ‘the final girl’, and more about the tables ultimately being completely turned around on the killer. No longer is it a frightened young woman with big breasts in a little white t-shirt running around in a house, to all the wrong places no doubt. Here, Erin, played wonderfully by Sharni Vinson, subverts all the ideas about what a strong woman in a horror film is and should be. She doesn’t need to be transformed by a bunch of killers – she is already a tough lady. The minute things get crazy she kicks into gear. It doesn’t take long before the hunters are turned into the hunted. 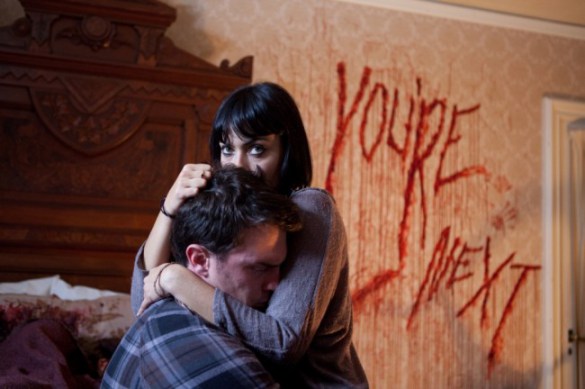 But that’s not all. I sort of suspected there might be a twist to part of the story, and there was. Regardless, I didn’t exactly know what it would be. When it came I found myself impressed. Not that I was so fooled. Mostly due to the fact I thought it a clever little twist for a horror-slasher.
Also, You’re Next contains a lot of great dark comedy on Simon Barrett’s part. He is an excellent writer. His stories definitely have a voice. This film challenges certain things we think about horror movies. In particular, those of the slasher sub-genre. There are times when you aren’t sure if you should laugh. But that is the point – Barrett and Wingard both want you to laugh. They’re telling you – it’s okay.
A horror movie doesn’t always have to be dead serious for its full running time. It isn’t outright funny. At times I found myself chuckling and then feeling a little bad for it afterwards. Even though a lot of it is certainly intentional. It’s just the way things are presented.
One moment I notice over and over occurs just before Aimee takes a run out the front door. Felix (Tucci) and his girlfriend Zee (Glenn) are moving a table. An expensive looking vase on top of it topples over as they move it out of the way, and Felix’s father barks at him – as if, at a time such as that once absolute chaos has broken out, a stupid vase would even matter. Just a little touch I thought that’s worth note.
Once the end hits, you’ll know You’re Next is meant to both horrify and produce laughs. I thought the very final scene came off perfect. It blended the two sides of the film in one little moment right before rolling the credits.
A little side note: Dwight Tilley really does this movie a service. That song’s too catchy.
On the Blu ray release there are some great special features. The commentary with Simon Barrett and Adam Wingard together is really worth checking out. You get a feel of how much these two love movies. In particular, the horror genre. I loved how Wingard talked about being such a fan of Alien and Aliens, and Barrett mentions how that film introduced its characters; something they wanted to replicate in this film. There’s some pretty cool and insightful stuff to hear as they go through.
One of the scares in You’re Next is actually, according to Wingard, based on a scene involving Tom Skerritt from Alien. Also, there is a featurette called “No Ordinary Home Invasion: The Making of You’re Next” which is a nice little addition. I always love seeing at least a few scenes broken down, or some of the effects shown on the Blu ray release to see a bit of the process. As an aspiring filmmaker, I love to see indie filmmakers, or just smaller scale filmmakers, do their thing and give a bit of advice as to how to accomplish certain shots. Here there are a few good looks into things behind the scenes.

As a horror film I absolutely give this a 5 star rating. This is a great addition to the genre, and really works on a different level from the usual slasher. Barrett is a consistently interesting screenwriter. Wingard also does great work. I continue to be a fan of his, having also seen and reviewed The Guest awhile back, which is another great film collaboration between Barrett and Wingard. I hope they’ll keep up doing fresh work. Also, I really love the ass-kicking heroine in a horror movie – You’re Next has one of those and then some.
I give the Blu ray release a 4 out of 5 rating. Simply because the only part of the whole release I was not satisfied with is the sound. The mix is very out of whack. Luckily, I don’t care about loud noises. But I think some people might find it a bit annoying. You have to really turn it up if you want to hear its dialogue without straining. Then, in a matter of seconds you might have your eardrums blown out when some of the action sequences kick in. However, this is not something that ruins the release. I still love it. The picture is so amazing. Wingard does interesting camerawork in his projects, and it’s nice to see in such high definition. The special features also make up for any of the sound issues. They’re really great.
If you haven’t seen the film yet, do yourself a favour and watch it soon. If you have and like it, or love it as I do, then go ahead and get this Blu ray – it is a really good release. Plus, help support some amazing indie-minded filmmakers.