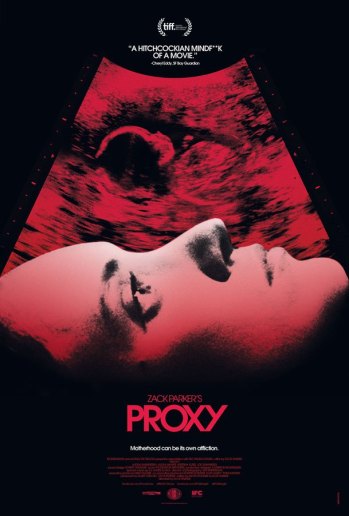 Previously, I’ve seen Zack Parker’s work with his earlier film Scalene, which I actually really enjoyed. Perhaps enjoy is not the best verb to describe the experience of that film, but either way it was effective, and I knew I wanted to see more from Parker. While filmed in 2013, this didn’t hit Canada until 2014. This is by far one of the best movies I saw last year. There is no doubt. Parker provides not only several gruesome moments to make this partly a horror film, he does an excellent job of intertwining several stories into one overall plot and allowing it to flow together coherently. A lesser filmmaker might get lost trying to wrap a few stories into one thrilling plot, Parker does so with a lot of grace, and I’m sure I wouldn’t be the first to bring up its similarities to Alfred Hitchcock’s Psycho.

Proxy starts off with Esther Woodhouse (Alexia Rasmussen) walking home after a check-up appointment with her doctor, as she’s very far along in her pregnancy. On the way, Esther is knocked out by someone in a red hooded sweatshirt, and terribly assaulted; the attacker smashes her belly in over and over with a brick. The baby is pronounced dead, but Esther survives. Afterwards, having no real family or friends, Esther goes to support groups where she ends up becoming friends with a woman named Melanie Michaels (Alexa Havins), who says her husband and little boy were killed by a drunk driver. However, Esther sees Melanie in a department store later yelling that her son has been kidnapped, looking for help. After Melanie leaves the store, though, Esther sees her bringing out the very alive boy to be “found”. From here, things begin to spin out of control, as Melanie is exposed, and Esther herself is not everything she truly seems.
Soon, one vicious event begins a domino effect that ultimately affects the lives of everyone involved with both Esther and Melanie.

To say anything else about the plot of this film would be to ruin the movie for anyone who has yet to see it. While I’ve said a bit, the best comes once things really kick into gear after Esther sees Melanie with her child. I honestly had no idea where Proxy would end. This is one of the few films to really throw me for a loop. This is great because the plot structure really reminds me a lot of Psycho. Whereas the Hitchcock classic begins focused on Marion Crane and then grimly switches gears when Norman Bates is introduced into the mix, Proxy also begins with a character who sort of walks us cinematically into the real plot of the film when Esther finds out her friend Melanie is a con-artist, and then everything unfolds. It’s a beautiful way to structure things.

I know there are similarities to other films, but I really believe Parker fixed in on some great Hitchcock-style techniques, specifically those in Psycho. For instance, the score is really gorgeous and dark and sneaky. There are moments where tension ratchets up because Parker has such an enormous, sweeping score that makes those emotional and tense moments come across even more effectively. Just as Hitchcock had those strings in the right places for Psycho, as does Parker here with his film. I think, these days, suspense and tension are often left by the wayside in the hands of certain directors. Parker is not one of those. He keeps things very unsettling and you’re never sure of the ground you’re treading on. This film keeps coming and coming until there’s nothing left to your nerves.

I’ve always liked Joe Swanberg, and while there are some great performances by both Anika Barön, as well as Alexa Havins, I think he really does some of the best work going on in Proxy. The story is centered on the women of the film, however, Swanberg is one of the characters most affected by everything which happens in the plot. Without ruining too much, you really see the pain in this character come through in Swanberg. He’s great at playing normal people. That probably has to do with the fact he directs his own stuff, and acts in a lot, almost constantly. He does a lot of films. And most are highly independent, so they usually go for a quite realistic approach. I think this makes Swanberg a great fit for the role. His performance is nice and subdued. The overall plot made me feel bad for his character, but his abilities as an actor make things all the more sympathetic. Really great stuff.
Alexa Havins has to be mentioned, as well. It’s impossible not to comment on her great acting. The character she plays, Melanie, is absolutely warped – beyond belief. I think the character could have easily come off much to theatrical and overblown. Havins plays this great. There are times she really comes across as a scary monster; I wouldn’t doubt there are people out there so consumed with a need for attention to the point they would do the most awful things imaginable. It’s an effective performance, and the character’s story really draws you in with Havins playing it so appropriately.

This is one of the best films from last year, but it’s also one of the better  movies I’ve seen in the last decade. Especially films in the horror genre. There are plenty of wild moments, in terms of blood and otherwise, however, this film really works on a horror level like Hitchcock’s Psycho. Parker does throw in a more than acceptable amount of blood and gore. Mainly what he does is make things into a psychological nightmare. While we begin the film feeling as if certain characters are the worst of the ensemble, later events come to change those opinions, and it’s just a really interesting character piece wrapped up in horror & thriller elements. This is flawless. A great modern horror masterpiece, and I continue to wait on more great work by Zack Parker.

Adam Wingard and Simon Barrett deliver the home invasion horror goods with YOU'RE NEXT.