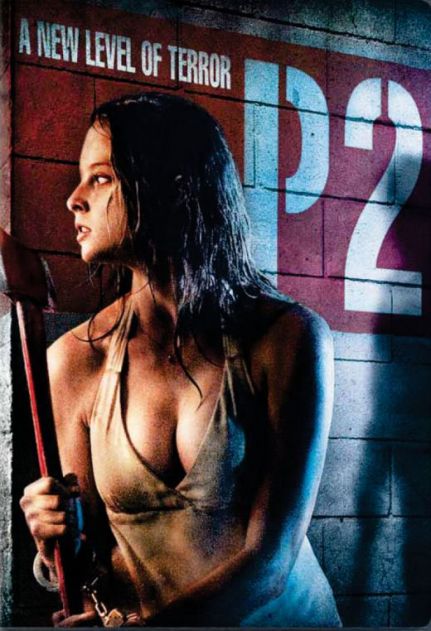 While I’m a really big fan of Franck Khalfoun’s work in the 2012 remake of the 1980s cult classic slasher, Maniac, I’m not particularly fond of his Christmastime horror film P2. Though, I did enjoy some moments and also found there to be a few real instances of suspense, the film as a whole is not really much of anything special.
P2 tells the story of Angela (Nichols) who is the late one out of the office on Christmas Eve. She heads downstairs in the elevator, accompanied by a friendly security guy name Karl. They chat a bit and everything seems fine. Once Angela gets to the parking garage and discovers her car’s battery is dead, though, she is forced to seek out help. This is when she comes across Thomas (Bentley), the seemingly friendly parking garage attendant. He tries to help boost Angela’s car, but it doesn’t work, and she wants to call a cab. Afterwards, walking through the dark garage, she trips and falls. Worse – Thomas sneaks up behind Angela in the dark and chloroforms her. When she wakes up, Thomas is wearing part of a Santa suit. He’s also got a lovely little dinner for them, complete with wine. Unfortunately for Angela, this is only the early beginnings of a very terrible, horrifying night before Christmas. 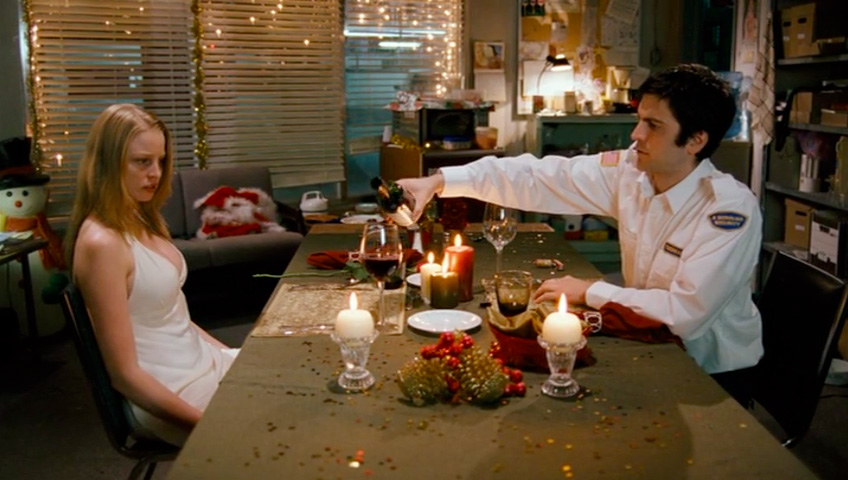 I like the idea of Christmas horror movies. I’m a fan of everything from The Nightmare Before Christmas to You Better Watch Out (a.k.a Christmas Evil) to my favourite Black Christmas (1974 – not the terrible remake). There are a bunch of good, and pretty fun, Christmas horrors out there. On the other hand, there are movies like P2, which essentially use the Christmas Eve plot point just for the sake of having everyone out of a building. I can’t really see any further need for this movie to take place around Christmas. Unless I’m missing something. I understand part of the whole story is that Thomas desperately wants to not be alone. I even get that perhaps the idea is that Thomas is really pushed over the edge because of the holiday season. What I don’t get is why not play into that more? We get the first little bit where they’re in the little office and it’s all lit up with Christmas lights, Wes Bentley is hamming in the Santa outfit, “Santa Baby” is playing here and there – but past that, there’s nothing more involving Christmas. 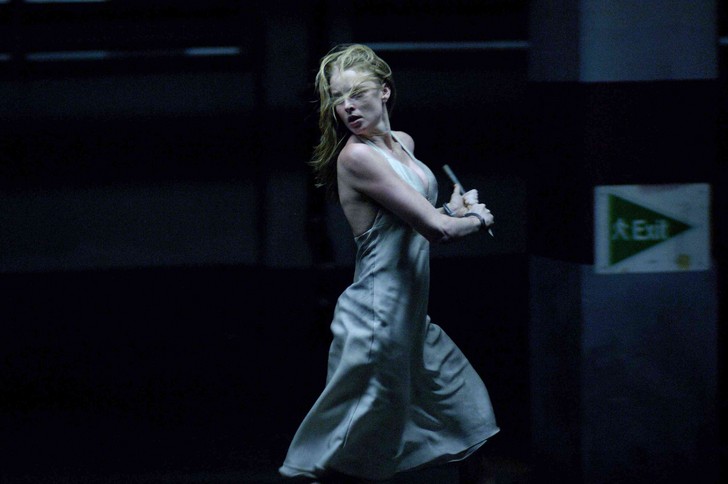 I guess you could try and say the same thing about Black Christmas, for instance, but my argument is that the 1974 classic needed the holiday season – without that, there would simply be girls in a sorority house. Instead, you’ve got the added presence of family members picking up students heading home for holidays, additional bodies on campus, et cetera, which all play into the mystery of the killer and the tension of the murders themselves. Without Christmas, Black Christmas wouldn’t particularly be the same. On the other hand, P2 could have used any statutory holiday on the calendar where an office building would most likely be cleared out totally. That aspect alone, in my eyes, sees the Christmas angle sort of forced unwillingly into the plot of P2.
One of the biggest things here which disappointed me was the lack of any real depth to the character of Thomas, played by West Bentley. Not that Bentley’s acting was bad, though it wasn’t really what I expect from him (I’ve loved him in a couple other films), it was just that his character didn’t really play well with me. In masked killer horror movies we’re often deprived of a lot of backstory, but even with slashers such as the one in The Prowler (a favourite of mine) we still get a few bits and pieces, other than dialogue, to give us an idea of why they kill. Not all films go this way – there are plenty of horror movie killers and slashers without any backstory really. But I would argue the best always give us something – even in Halloween, John Carpenter gives us those initial scenes to set up Michael Myers and his future murderous rampage throughout Haddonfield.
With P2, we really only get an idea of Thomas as a killer through the few sparse lines Bentley delivers about “being so alone,” and similar ideas. I didn’t need a big huge flashback, or some segment of the film dedicated to his origins, but it just felt like this whole plot was sort of born out of a very simple idea and then never expanded upon too much. A lot of effort went into developing the story of Angela (of course – we’re supposed to feel for & root for her so it’s only natural the filmmakers would give us a bit more of her life to elicit some sympathy, empathy, any kind of feelings). I think they should have begun the movie in a different way. Instead of starting in media res, they could have given us some sort of brief look at Thomas; give us even just a scene of him obsessing over Angela in his little office, or maybe better show him at home, give us a look into his world. Without that, it’s sort of like all the tension and thrill builds to a point, and then suddenly drops off. After awhile I just wanted to see Angela kill Thomas, in any possible way; it didn’t matter. Not that you’re supposed to really care about the killer in these types of films, but it helps to give some more meat to the character. Otherwise you’re left really cold. There was only so much I could get into P2. If Thomas’ character had been expanded that might’ve been different. 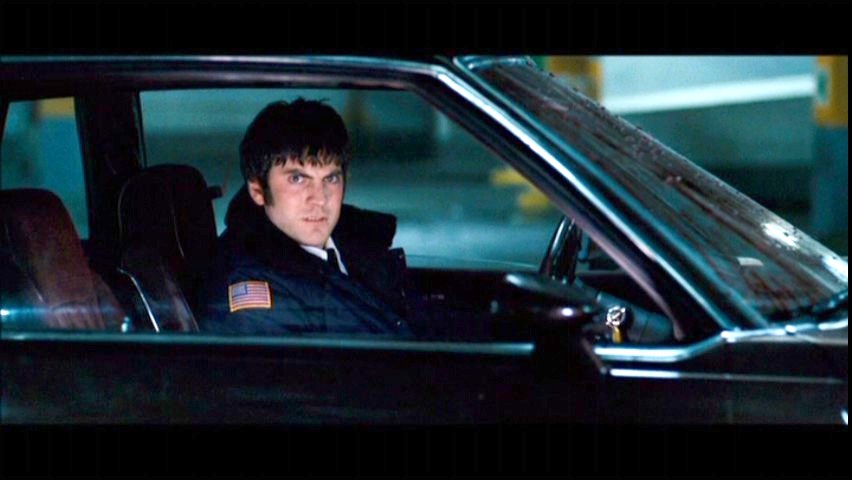 The best part of this movie, for me, was Rachel Nichols. She did a really good job portraying Angela, from the casual scenes in the beginning right on down to the gritty, tense moments as she’s being hunted & stalked by Thomas. She shows a pretty good range here. I think sometimes the role Nichols plays here can come off as whiny, or weak, depending on how the actress plays the character. On the contrary, Nichols does a great job, and the character comes off very strong. Even in the beginning after Thomas first takes Angela hostage, Nichols does great at making Angela a strong woman; she doesn’t reall cry or wail much, but more so goes right to being tough, calling out Thomas, saying what she wants. I think as far as female roles go in slasher-type films (I consider this to be a slasher even though there’s no real ‘slashing’ as such; it’s still following the formula of a slasher), the character of Angela is really top notch. Most certainly as Nichols plays the character. Really solid aspect to a mediocre film. 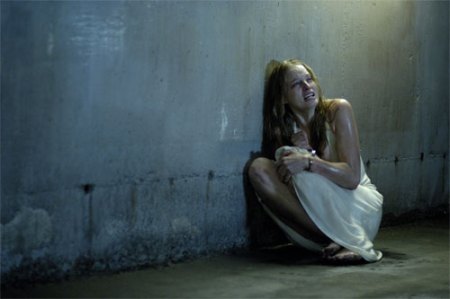 All in all, I give P2 a 2.5 out of 5 stars. It didn’t particularly bore me, however, I wasn’t glued tight to the screen as I am with other similar movies. While Thomas is a less developed character than I prefer, Angela’s role made up partly for this blunder. Likewise, I really enjoyed some of the bloody/gory bits throughout the film. One particular scene has a guy being murdered with a car; there’s a really gnarly-awesome shot or two when Thomas runs him into a wall with his car, crushing him up, spilling his guts. Those were some excellent little moments I thought really did the film justice, and particularly since this runs in the vein of most slashers. There isn’t a lot of it, but the gore we do get certainly will satisfy a lot of horror hounds out there. Not all – but some.
If Thomas had been given more time, if we could have gotten a bit more insight into his killer world, I think P2 would have risen above a lot of the tripe in the horror genre & slasher sub-genre. It doesn’t, and this movie is forever stuck in a zone where I probably won’t watch it again unless I’m really stuck for a Christmastime horror; highly unlikely, but who knows. It isn’t all bad. If you haven’t seen it, check it out, but don’t expect this to reinvent the wheel on horror or slashers – it’s a mildly entertaining movie with a decent lead performance by Rachel Nichols.