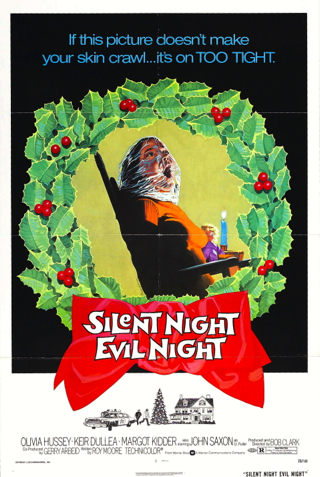 Black Christmas tells the story of a house full of sorority sisters who first start receiving terrible and obscene phone calls from an unidentified stalker. Later, things turn bloody when the girls are stalked and murdered – all by a killer hiding within their sorority house. And all just in time for the holiday season while the campus is thriving with students and parents, everyone heading home for Christmas.
Will the girls survive? Can the police – or anybody – help them? Worst of all – who is the maniac preying on these girls? It could be anyone. It could be somebody close. Or anyone at all.
There are so many things I love about Black Christmas, it’s hard to write a review and not alienate people by being too long. But as my opinions on film aren’t exactly one you could say is in line with the ‘popular’ opinion, those few who agree with me might want to read away.
Firstly, this is said to be one of the first modern slasher films; of course that’s after the likes of Peeping Tom and Psycho. Yet it also came before such movies as Halloween and the film which borrowed its premise in part from Black Christmas about 5 years later – the 1979 creeping thriller When A Stranger Calls. This film has no doubt influenced several, if not many, modern slasher horrors.
One thing that makes this better than most slashers is the fact it isn’t nearly as simple minded as the typical fare we see in the sub-genre. At least not in my opinion, anyways. Although it’s set in a sorority house, and as usual the slasher’s victims are women, the female characters are not the stereotypical women who usually populate slasher movies, or even horror in general. Not to say all – there are some really great movies which subvert our expectations about female characters in the horror genre. I just think Black Christmas, coming out in 1974, was really innovative for its time. The women here are great characters because they’re not repressed types nor are they completely off-the-wall wild either; from Andrea Martin’s meek and mild character to Margot Kidder’s outgoing and hilarious character, each of these women sort of help to strike a balance. They’re real college girls. Nowadays you’ll get so many fake characters in modern slashers when it comes to women. Not with Black Christmas – each of these main female characters are different, and each is played exceptionally well. Furthermore, whereas even Halloween really went towards the trope of the good girl is the one who survives while the ‘bad girls’ all get slashed (I’m not knocking Carpenter’s film – I love it just as much as this one), Black Christmas doesn’t discriminate in any way, shape, or form. All of the girls in the sorority house are targets. I think this is one really great aspect of the film. Without there being a distinction between the girls as sort of total opposites like a lot of slashers (ones who drink & have sex vs. the fetishised virgin) I think Black Christmas succeeded in going against the grain before all the tropes of the slasher sub-genre were really set in stone.

Being one of the first modern slasher movies, this one has an advantage of not seeming tired after countless others copying the formula. For instance, the whole trope of a killer being inside the house, calling from within to terrorise those who live there, pretty much got its popularity from Black Christmas. There are some great point-of-view shots in this movie, which really add to the creepy tone. Apparently, portions of the camerawork was done with a rig mounted on the back of one of the operators; he went around the house in this way, even climbing the trellis, to get footage making the killer’s perspective look strange. I think it really worked. These scenes really helped the killer come off as disturbing. In addition, the phone calls with the weird wails and half sentences, the blood curdling screams, they carved out a really great & terrifying persona for the killer while never having to delve into any back story. Sometimes a back story is what I want for a killer, other times it isn’t necessary; this movie is one of the latter where there isn’t any need to get a history on the killer. The whole film serves us up enough creepiness to forego all the answers we might usually crave in regards to wanting more about a movie’s villain. I think sitting us directly in the killer’s point-of-view was a very smart move on Clark’s part, as it really gets the audience into his psyche without resorting to full blown exposition through dialogue to get the character across as more than one-dimensional. Not only that, it satisfied the mystery elements of the script’s plot, and keeps us guessing as to who the killer may be behind the murders.
Moreover, the red herrings throughout the film really work. Particularly one character is made to look quite possibly very guilty. They add in some very good aspects through the script involving Dullea’s character and a possible connection to the scary phone calls. I always love great uses of a red herring, and Black Christmas absolutely uses it well.

Just a side note on a part of the movie that really made me laugh, in a great & intended way. One of my favourite scenes is after Lieutenant Fuller (Saxon) receives the note from Sgt. Nash (McGrath); earlier, Barb (Kidder) gives Nash the phone number to reach them, and tells him it begins with FELLATIO, which she says is a new prefix. There’s another police officer in the frame as Fuller reads the note to himself and before anything is even said he’s laughing. Saxon plays the scene so well; I can only imagine they had to do a few takes on that one. It just continues on, as the officer keeps laughing harder. Best of all, it sounds like genuine laughter. The actor really looks like he was having a great laugh. All the while, Doug McGrath does an excellent job in his performance as the dim-witted Sergeant Nash. Classic scene. While a lot of slashers get caught up in very campy humour, this one scene shows why Black Christmas is much better than the usual titles found in the sub-genre. This single scene, which isn’t too long, really adds more good humour (most of which is somehow tied into Kidder’s character whether she is present or not) to the film. Perhaps another element other movies tried to emulate but couldn’t quite hit as direct on the mark as Black Christmas.

Another great exchange is between Mr. Harrison (James Edmond) and Mrs. Mac (Waldman). Harrison is worried about how the house is being run, what his daughter is up to, et cetera. While he’s talking, Mrs. Mac comically covers up some ‘free love’-type poster of two people naked in a peace sign, her hand conveniently blocking Harrison’s eyes from their naked bodies. It’s not too long of a scene, but it really is gold. Mrs. Mac is cursing on the cat, Claude, calling him a “prick” just as Harrison pokes his head up the staircase; the look they give one another is comedy gold. I really cracked up at this one part. Not only for the outright laugh, but just the dark comedy of the situation: Harrison is worried about his daughter, who is already dead, being corrupted by the foul-mouthed (and awesome) Mrs. Mac, meanwhile his daughter is already plastic wrapped in the attic long ago. Dark, yet funny.
The performances here are really all spot on, and this is surprising when it comes to slasher movies. Especially considering this was one of the earliest of the modern slashers, if not the first (again so that no one gets angry – when I mean modern slashers I mean those which came after the real innovators of the sub-genre: Peeping Tom and Psycho). I don’t really expect great examples of acting when watching most of the slasher horror movies out there. Though, I also don’t hold any bias; I don’t go in thinking they’ll all be terribly acted, either. All the same, Black Christmas has several really good characters. I won’t go too deep into the separate performances except to say I loved Olivia Hussey and Keir Dullea, certainly together onscreen. I also really enjoyed both Andrea Martin and Margot Kidder in their considerable yet smaller roles; they were both perfect. Kidder, in particular, really is a lot of laughs here, and also one tough cookie – great role.
Plus there’s John Saxon, Doug McGrath, and one of my favourites, Art Hindle. I could go on about the acting, but it’s enough to say this film would not be as effective and scary as it was, and still is, if it weren’t for the solid acting. Clark could’ve ended up with a very mediocre, possibly even bad, film if different people were cast for these roles. Thank goodness the cast was wonderful. 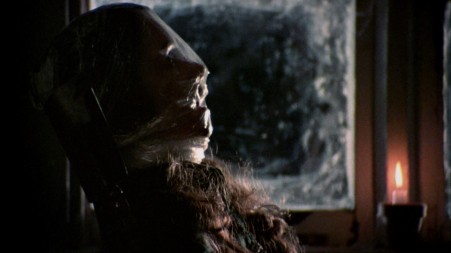 A 5 star rating is undeniable for this film. Black Christmas is not just one of the best Christmas horror movies out there, it’s one of the greatest slashers ever made. I would put this one in my top three slasher films, right alongside Halloween (not sure what other title I’d include off the top of my head). There’s enough humour to keep it interesting, a bit of drama, and lots of nasty, creepy kills & horrifying shots (my favourite – likely the favourite of many – is when the killer’s single eye can be seen amongst the darkness between the slight crack of a door) to solidify this in the all-time greats of horror. The influence of Black Christmas is huge, there is no doubt. I hope it will continue to influence future generations of horror filmmakers.  This is one film that should never be lost.

I’d highly recommend anyone who hasn’t seen this yet, get a copy and watch it over Christmas. There’s always time for a little horror on the holidays. And you won’t go wrong with this film.