The very start of this episode shows us more of the relationship between Tate (Evan Peters) and Nora Montgomery (Lily Rabe). While a young Tate, very little, runs around Murder House while his mother leaves him on his own, he comes across the old child of the Montgomerys, lost and filthy and creepy in the basement. Nora shows up and tells Tate about how all he needs to do if the ghosts scare him is close his eyes, then tell them to go away. This sets up not just their relationship, which further compounds after Tate becomes a ghost himself in the house, it also goes deeper in this episode. Later, we’ll see where this comes into play even more.

Now that Violet (Taissa Farmiga) is completely aware of her living dead situation, visually we’re seeing how it affects both her and her father Ben (Dylan McDermott). He tries taking her to go and see Vivien (Connie Britton), as well as bring her home finally, but naturally Violet cannot make it off the property. When Ben pulls out of the driveway, we pan around to Violet up in her window, talking with Tate. She’s slowly accepting the situation, however, that does not make it any better for her.
Moreover, Chad (Zachary Quinto) and Patrick (Teddy Sears) are also planning for the babies. They’re hilarious together, painting the room and the cribs and the dresser, et cetera. Great scene as Tate confronts them saying they ought not mess with Violet’s mother; I thought the way Chad gets in his face and says “What are you gonna do – murder me?” was darkly hilarious yet also just bad ass at the same time. Well written scene. I always enjoy how American Horror Story as a series overall both includes and confronts gay issues. This scene and the whole subplot of Chad/Patrick in Murder House is one small example of how well the series uses gay characters. And why not? Too many people get hung up on the fact they’re gay, instead of simply the fact they’re a human, they’re a person, a character. As long as they’re written well and enjoyable, who cares if the character is gay, straight, transgender, or whatever? I’m glad the writers have the ability to write the characters of Chad and Patrick well enough, they’re a great addition to the whole mix of ghosts traipsing around Murder House.
Also, their addition ups the ante even more, as it seems each and every ghost in the house has their own plan in regards to Vivien Harmon’s babies. It’s almost like an old western where a bunch of outlaws all end up in the same place, each angling to their own ends. Very cool episode in this sense because we get a good look at all that, out in the open.
Billie Dean Howard (Sarah Paulson) shows up to help Constance and Violent. I like how Billie is truly psychic, so she can tell Violet is dead. Neat little moment between them while they connect telekinetically.
My favourite part is a brief little bit where Billie tells Constance and Violet all about the supposed story behind Roanoke – the Lost Colony in the 16th century whose citizens all up and left, seemingly. Only the word ‘croatoan’ was left carved in a tree. Of course, Billie’s story is a fabrication, using the idea of spirits lingering to explain how they might purge the spirits o the house; particularly, Constance wants to get “the gays” out.
This all plays more into how the ghosts are all vying for the Harmon babies, each with their own misguided and mental plan to sort of start over and integrate the newborns into the ghostly, haunting family of Murder House. 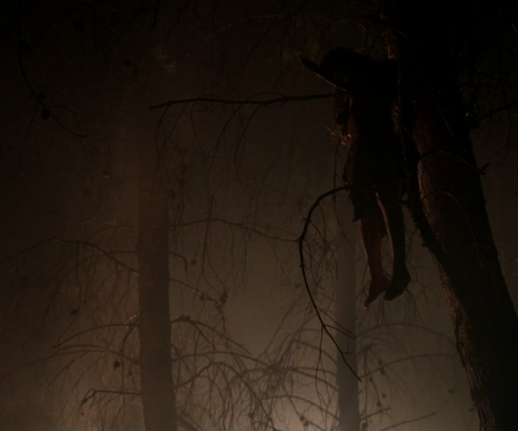 Vivien’s doctor at the psychiatric hospital advises her and Ben she might need an emergency C-section. This is due to the fact one of the twins seems to be growing at an abnormally fast rate, while the other is growing weaker; the ‘alpha’ is draining all the nutrients, leaving the second to essentially wither away. And we all know what’s going on there, right? That little demon baby is sucking up everything useful, hoping to spring from the womb and deploy its evil.
Once Ben gets back to the house, Violet unfortunately has to make it painfully clear for her father in order for him to accept that she is dead. All the same, Ben doesn’t believe her. Everything comes down at once – right as she’s about to make him understand, Vivien’s water breaks and the birth is upon us.
I think this might be one of my favourite sequences in the entire first season of American Horror Story, maybe even in the series as a whole. Reason being is that it’s intensely chaotic, there are a hundred things happening all at once. We even get the original twins from the Pilot, who help Murder House by smashing up the Harmon vehicle, puncturing its tires and beating it to pieces. Then ole Charles Montgomery (Matt Ross) shows up, the dead 1968 nurses stab holes and all at his side to assist in the birth; they’re all present. It’s one of the most surreal group of scenes out of the season, and that is saying something.
The way it’s shot, half blurry bits as Vivien screams and prepares to give birth to her new twins, it is dark and weird, as well as absolutely beautiful. There is very sombre-like chamber music playing in the background, we get flashbacks to Vivien giving birth to Violet – a much happier time for Ben and Viv – and the whole aesthetic here is out of this world! The dark, candle lit birth is so weird. Shots here remind me of Rosemary’s Baby at times, when the titular character was experiencing those extremely strange dream-like moments (but they were no dreams); this is even more fun because I find there are other moments in Season 1 with Vivien which are definitely an homage to Roman Polanski’s classic psychological horror.

What I’m thrilled so much by is how Violet tries to use the whole Roanoke spell, courtesy of psychic Billie Dean Howard, and it fails hilariously on Chad – that scene was killer. Quinto is full of charisma. The thing I enjoy about that part so much is how Quinto hammers it home that basically there’s no getting rid of the ghosts; they’re doomed for eternity. Chad is stuck with Patrick, a man who doesn’t truly love him, for the rest of time, and so on, and so on. They each have their own burden to bear eternally, there’s no end to it. The pain simply goes on endlessly and there will be no rest. With all the dark comedy on Quinto’s end during that scene, it is actually a traumatic conversation in the end. Violet faces down the fact she’ll never find any sort of peace, ever again. The afterlife is merely an abyss, there’s no closure.
Then poor Vivien – after the savage birth of one stillborn and the child of Rubber Man Tate Langdon a.k.a the offspring of a human and a ghost – bleeds out and passes on to the other side. This moment falls with such heavy impact. Everything from the way it’s shot, to the sound design and dialogue. All those elements come together to make the finale ridiculously spooky. The best shot is how when Vivien finally dies, the camera reveals Ben Harmon alone – his wife pale and dead and the bed covered in blood between her legs and everywhere else – and now all the ghosts are gone. It’s an eerie set of shots.
Furthermore, Violet has been told the truth about her love – Tate the rubber rapist. More and more, she discovers what lies behind Tate. She thought he was merely “attracted to the darkness“, but Violet tells him: “You are the darkness.”
While Tate clearly does love her, he is still an awful and terrible ghost, one who has caused havoc in the afterlife as he so horrifically acted in flesh and blood. So I find the way he and Violet end things here both sad and highly interesting. Finally, she screams at Tate to go away, which we already know is the way to dispatch the ghosts who you don’t want to bother you.
The best part is another pan around reveal – once Violet screams Tate into the mist, the camera turns and sees Vivien caressing her daughter’s head, arm around her shoulder. They’re now together, perhaps even happier in a tragic ghostly sense than ever before.

Massively impressive penultimate episode for the first season. The next episode and finale is fittingly titled “Afterbirth” and is directed by Bradley Buecker, a Ryan Murphy regular on Glee, American Horror Story, and also a producer on Nip/Tuck.
Excited to do a review for the finale, as well as to get on into the Season 2 reviews. Stay tuned for lots more horror and creepy stuff!