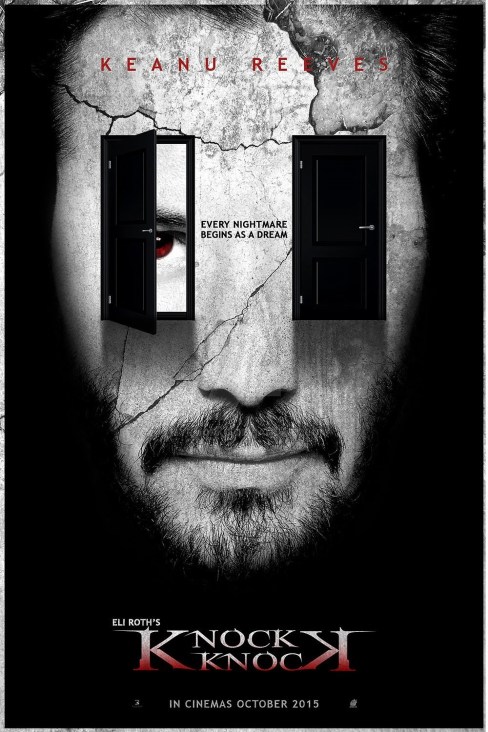 I’ve been a fan of Eli Roth ever since Cabin Fever. Say what you want about that movie, it’s a fun little modern horror; not for everyone, but it isn’t bad. Not in my mind, anyways. Then when Roth came out with Hostel, the game changed and I realized his brand of horror was the shocking sort – yet not for shock’s sake, rather it engages you viscerally to a point, mostly, where you find yourself immersed in the experiences of the characters. Every one of his feature films I’ve enjoyed so far – waiting patiently in my little nook of Easter Canada to see The Green Inferno – and even more so, I think Roth has great talent as a producer, having helped films like The Last Exorcism, Aftershock, The Sacrament, as well as most recently The Stranger and Clown each of which were pretty fun indie horror movies.
With his latest, Knock Knock, Roth takes the 1977 horror Death Game from director Peter S. Traynor and modernizes things slightly, giving our latest generation (of which I’m near the tail end) a home invasion film with plenty of sharp teeth and even one sassy, satirical tongue.

There are plenty of differing opinions on Keanu Reeves and his merit as an actor. Honestly, from a completely personal point of view, I’ve always loved him. Partly that stems from my childhood love of Bill & Ted’s Excellent Adventure/Bill & Ted’s Bogus Journey. But seriously, River’s Edge, Point Break (it’s not a great film but a solid action effort), My Own Private Idaho, these alone impress me enough to say Reeves is a quality actor when given the right material; then there’s The Matrix, to which I’d argue I honestly don’t know if anyone else could’ve done Neo in the cool, at times disaffected, and slick way Reeves pulled it off.
But right from the beginning of Knock Knock, I found myself drawn into his character, Evan Webber. In particular, the relationship between Evan and his wife Karen (Ignacia Allamand) feels so natural, very real. The way they acted with the kids, their little moments together alone, it was all great writing fused with proper acting from Allamand and Reeves.
Then once the girls show up, things get super interesting. At first I didn’t get into their performances, honestly. After a little while, Lorenza Izzo and Ana de Armas began to impress me, bit by bit. They really keep things feeling off-kilter, in a truly proper way. Both of them are creepy almost from the get go, though, subtly, not at all in an outright sense. Furthermore, the chemistry with Reeves and the girls is electrifying in certain scenes – the way his thumb shakes, hovering around his phone as he nervously checks to see how close the Uber ride is to the house, it’s just about perfect. Lots of good stuff in the little gestures.

Ultimately, Evan Webber brings dangerous and the unpredictable into his life. He could have thrown those girls out of his house once they started coming onto him. He could have walked away. So, in the end, Evan doesn’t deserve the extent of what comes to pass, however, he absolutely could have made sure he didn’t end up in the situation he did. When he wakes up into the madness of his infidelity’s aftermath, there’s part of me that feels bad because you can see, immediately, his regret is vicious. At the same time, most of me says “fuck him”.
And this is part of why Knock Knock is interesting and unnerving. Roth places us in the uncomfortable position of hating what Evan has done to his wife and family by cheating, while also not being able to reconcile his stupid act of infidelity with what these two girls inflict upon him. Things get even worse when the girls reveal they’re underage, threatening Evan with revealing his statutory rape; sure, he didn’t know, but Mr. Webber also made no attempt to stop what was happening, not knowing these girls, not knowing how old they were, what kind of people they are, et cetera. One reason I do enjoy this movie is because Roth plays with us, much like how the girls play with Evan.

The film takes it turn from erotic thriller to dark horror once Evan drops the girls off and they eventually make their way back to his place, sneaking in, then knocking him out. I found the following scene immediately brings a sneaky, creepy factor, more than any point before, with Genesis (Lorenza Izzo) sitting at the vanity putting on dark makeup around her eyes while Evan struggles tied up on the bed in the background. Things get rottenly disturbing, in such a perfect way, after this point. Bel (Ana de Armas) strolls in and psychologically tortures Evan, wearing his daughter’s schoolgirl uniform, her panties, and calling him Daddy. It’s so perverse, so unnerving, it works wonders. All the while Genesis is still in the background, trying on makeup and jewelry, writing on Evan’s wife’s vanity mirror with lipstick (aptly she prints “It was not a dream!“). This entire sequence is great, it destabilizes the viewer and takes us into scary territory. One of my favourite small moments is when Genesis walks through the dark hallway, running her finger along the wall and slightly tipping the pictures, they swing back and forth a little and she walks on; something weirdly chilling about this brief shot. 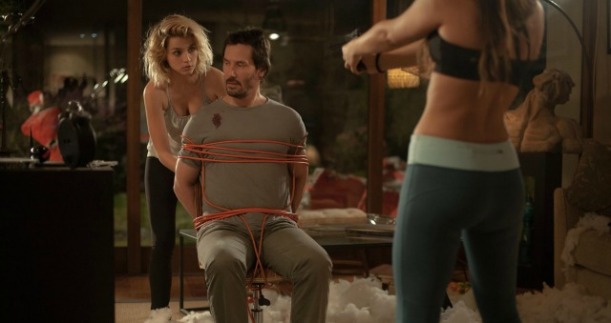 There’s not as much outright bloody and gore as you might expect for an Eli Roth horror film. While the disturbing, nerve wracking aspect of Knock Knock is almost perpetually present from the moment Bel and Genesis show up to the finale, there isn’t a ton of that Roth nastiness.
Although, I did find SPOILER ALERT how poor Louis (Aaron Burns) went out/how the girls papier-mâchéd his corpse was pretty raw! I’m not saying there isn’t any of that archetypal Roth style here, there certainly is. I’m just surprised. I honestly thought this would be another full-on bloodfest. Even during the finale, with all the psychological horror mixed with a few bits of very physical violence, I expected gore to start pouring out, and still Roth restrained himself from devolving into that sort of horror. Instead, I feel like the psychosexual nature of the plot, all the terrorizing of Evan, it made things more devastating than if Roth and his fellow writers had gone for something more vile, more “torture porn” (boy do I hate that label but it works). Because again, in the end, I didn’t want to see Evan be killed or even tortured. As much as what he did was wrong, his infidelity is awful, there’s still that part of me, of us hopefully, which does not want to condemn him to death; his situation is murky, full of all sorts of twisty, turning, messy bits.
Death, though? I don’t believe, despite all his flaws, his terrible mistakes, that’s the most fitting punishment. Having his infidelity revealed, even having him arrested and his wife leaving him, taking the family, et cetera – those are are appropriate. But death, no. In the process of Knock Knock, I think the film will reveal the sickness in the viewer: did you want him to die for cheating on his wife with two underage girls, or were you conflicted yet didn’t want to see Evan murdered? Very telling film, which dives into many aspects including how we as an audience judge the characters and their decisions within a filmic space.
I won’t reveal the revelations in the last ten minutes. Some of what I’ve said will change with those pieces, some won’t all the same. Find out for yourself and let me know what you think/feel! 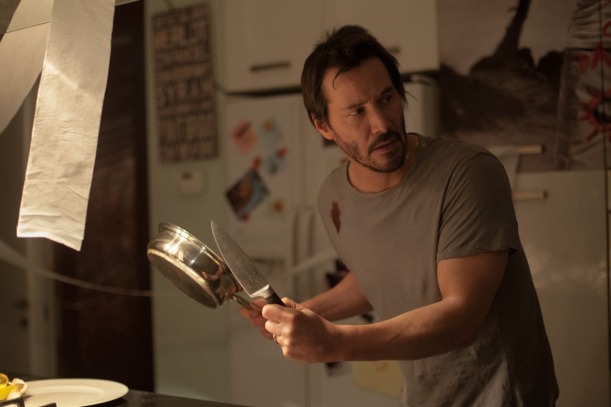 All in all, I’m giving Eli Roth’s latest psychological horror-thriller a 4 out of 5 stars. This is a heavy, brutal piece of cinema, which is a remake of Death Game and also its own film. There’s something different about this movie than the other horror movies Roth has done. Bits of Knock Knock are straight up erotic thriller, while so much of the rest is downright disturbing horror. Most of all, Roth taps deep, far into extremely uncomfortable aspects of humanity, from sexuality to infidelity to the judgement we place on others before knowing all the facts, and more. The ending works so incredibly well, the last lines are perfection, and I can’t imagine this finishing in any other way.
My verdict is that Knock Knock is well crafted, it subverts expectations wildly despite other reviews and online comments telling you the movie follows a formulaic technique used by other horror-thrillers; it certainly does not. A few times I found myself genuinely surprised. Check this out for a good dose of steamy thriller and lots of psychological horror, terror, and straight up madness!