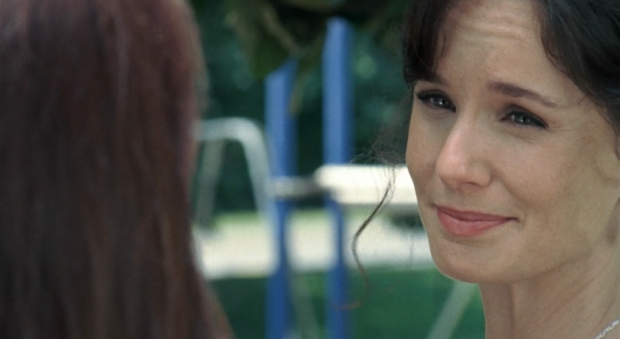 This episode takes a step back from Carl (Chandler Riggs) being shot in the woods, right in front of both his father Rick (Andrew Lincoln) and Shane (Jon Bernthal).
Starting out, we’re flashed back to before the fall of humanity. Lori (Sarah Wayne Callies) is at the playground, talking about Rick to her friend. They talk about the troubles of their relationship. Lori says they were “married so young” and perhaps that’s part of their issue. This scene is actually the moment where Shane tells Lori about the shooting; the one which puts Rick in the hospital bed where he’ll lay until the zombie apocalypse comes. Shane tries to takethe blame for the situation, as they look at Carl coming towards them with a smiling face.
Now, we’re back in the present with Rick – this time it’s Carl who took a bullet. Such a tragic parallel. Father runs with his dying son in his arms. The man who accidentally shot him is Otis (Pruitt Taylor Vince), who runs almost dragged by Shane, telling them to “talk to Hershel“. Up at a big ranch house, Maggie Greene (Lauren Cohan) calls out to her father Hershel (Scott Wilson). He has a bunch of supplies and takes Carl into a bed where he begins trying to treat the boy. Others are working around Hershel – his daughter Maggie, his other daughter Beth (Emily Kinney), Patricia (Jane McNeill). It’s a frantic, bloody scene. But now there’s a new influx of characters for the series. The Walking Dead just got stronger.

Rick is rightfully devastated, worrying for his son. Otis feels terrible for what happened. He’d been out hunting and then the worst happened all of a sudden. Meanwhile, the other group is still in the woods. Lori heard the gunshot and worries. Daryl (Norman Reedus) says to keep moving looking for Sophia, which Andrea (Laurie Holden) and Glenn (Steven Yeun) agree with, as well as Carol (Melissa McBride). On they go, sadly. Now there’s two children at terrible risk, possibly on the verge of death. Poor Carl and Sophia. Not a world made for the children, or the weak, the sick. Not for anybody, I suppose.
Back out on the highway, Dale (Jeffrey DeMunn) is fiddling with car parts while T-Dog (Irone Singleton) seems restless, worrying about everyone still being gone. Likewise, Dale worries about T-Dog; the cut on his arm is pretty rough and giving him trouble. An infection is on the loose, which makes Dale even more concerned.
Bits of gruesome imagery. The highway is just like one long extensive cemetery. Creepy as all hell. 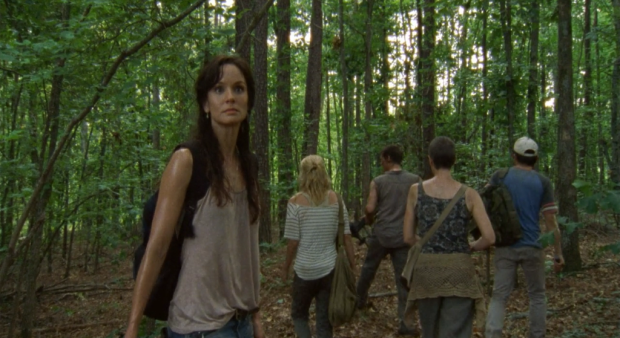 Dale: “Listen, your veins are very discoloured. You got a hell of an infection there. You could die from blood poisoning.”
T–Dog: “Oh, man. Wouldn‘t that be the way? World gone to hell, the dead risen up to eat the living and Theodore Douglas is done in by a cut on his arm.”

Little Carl soldiers on as Hershel extracts the bullet fragments from his wounded side. Amazing to have someone like Hershel there. The wasteland could be even worse without someone having medical knowledge. Rick donates blood for Carl and also worries that Lori is out there, not knowing a thing about Carl.
But things are bad. Carl needs actual surgery for Hershel to figure everything out. They need a respirator, its equipment, sutures and so on. Otis suggests the high school, where a FEMA shelter had been setup, which probably has supplies. Shane agrees to go out, and Otis wants to tag along; he feels responsible for everything. Otis was a volunteer EMT, so he knows what they’re looking for and Shane takes him out on the road. A dangerous journey, but necessary.
Out of nowhere, Lori and the group are found in the woods. By Maggie. On horseback. Daryl is sceptical, although Maggie takes Lori and rides back to the ranch after telling her what’s happened to her son. Things are tense. Up on the road, Glenn tells Dale about Carl being shot. The group are split up, but only temporarily.
Hershel and Rick have a chat on the porch. The former is a family man just trying to make sure his own survives. Hershel relates the zombie virus to AIDS, but Rick tries to tell him: “This is a whole other thing.” He doesn’t yet realize what’s happening, saying that’s it is simply “nature correcting itself” and that eventually things will set themselves right. So terribly misguided, it seems. But a good man. 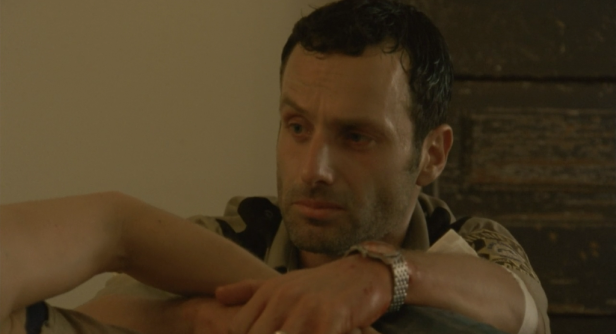 Out headed towards the high school, Otis and Shane try to keep from drawing attention to themselves. A massive horde of zombies is crowded around the building. A medical trailer sits on the opposite side from where they hide. At the same time, Daryl, Dale and the others on the highway try to decide whether or not they should stay or go, in regards to Sophia. They send Glenn with T-Dog, out to the farm. My favourite part of the episode? Daryl has his brother Merle’s stash of drugs, a massive Ziploc with a ton of bottles in it. Appears “Merle got the clap on occasion“, as well as other things. Amazing little moment in a ton of bad, dark times.
The most interesting part of the episode, though, is definitely when Shane and Otis find themselves in a tough spot. Trying their hardest to get the medicinal supplies Hershel needs to operate on Carl, they’ve put their lives on the line. Tons of zombies are diverted for a little while after they fire off a couple flares from a police cruiser. This gives them time. And they need time, as Carl’s condition gets worse with too much of it passing.
Otis and Shane find the items they need. But going back is a lot more difficult than it was getting in. Trapped in a building’s entrance they both try to figure out some way forward through their insurmountable predicament, facing row after row of zombies. 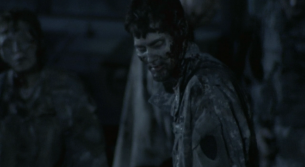 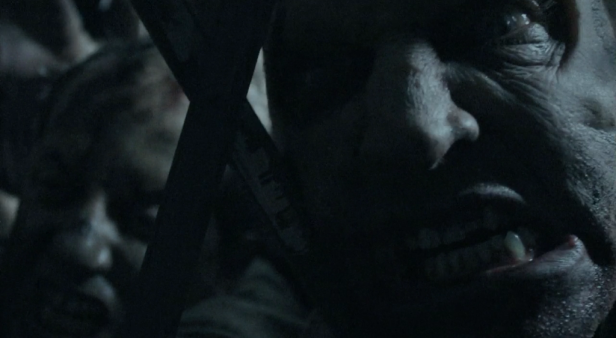 Next episode, after this exciting cliffhanger, is “Save the Last One”. Can’t wait to review and recap that one, after seeing it again. Stay tuned.