Cinemax’s Banshee
Season 4, Episode 1: “Something Out of the Bible”
Directed by Ole Christian Madsen
Written by Jonathan Tropper

* For a review of the next episode, “The Burden of Beauty” – click here

After the tense and volatile ending of Season 3, Cinemax’s Banshee enters into its swan song fourth season. I’ve watched the series up to now, but only recently decided to start reviewing. So let’s get to the ass kicking, shall we?
In the woods is new Sheriff Brock Lotus (Matt Servitto). He’s got a GPS monitor and tracks through a path, eventually coming to an abandoned cabin. He heads in to find a ragged looking Lucas Hood (Antony Starr). Clearly it’s been awhile.
Following the events of the Season 3 finale, where will we find Job (Hoon Lee) now? Not to mention Carrie Hopewell (Ivana Milicevic) and Sugar Bates (Frankie Faison). Well, we’re about to find all that out, too.
Hood is bearded, his hair long. He’s been hiding for two whole years like “some kind of mountain man,” as Brock puts it. On back to the station goes Hood with the new Sheriff. Things aren’t the way they once were, though. Station’s not in the Caddy anymore, the whole place is a much more fancy, professional-looking place. Kurt Bunker (Tom Pelphrey) is still around, a new Deputy named Nina Cruz (Ana Ayora) is there, as well. What a change from the old way.
Turns out that Rebecca Bowman (Lili Simmons), niece to Kai Proctor (Ulrich Thomsen), is dead. What a tragic death. Maybe a serial killer afoot. Apparently, the final coordinates on the GPS Brock was using led him to the cabin where he ran into Hood. Even wilder, the land belongs to Proctor. Hmm.
I enjoy that we’re seeing Hood now not as the Sheriff any longer. We’re so used to watching him in that position, having power, so it gives him an almost superhuman quality that’s still totally human. Now, that’s gone, and he’s just a guy. A guy who can fight well. The world is filled with them. 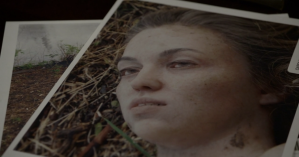 Proctor is now the Mayor of Banshee. Inevitable. So the crooked ways of his dealings worm their way into office. Along with muscle man Clay Burton (Matthew Rauch). Mayor Proctor gives a press conference concerning Rebecca’s death, and you can only imagine what Kai’s got in store. Meanwhile, Kai breaks down, too. To make matters worse, he didn’t only love his niece, he had a creepy thing going on for her. So who knows what’s happening in his brain.
Kai is another favourite of mine in this series. Not only is Thomsen an incredible actor, one who brings a real authenticity to the character, the whole story of Proctor’s character is amazing. Having him involved with the Amish community was always an interesting aspect of the series as a whole. Having him as a gangster, even better. He’s mayor now, so how could get it any better?
Finally, we see Carrie, and how the fallout of last season, Gordon’s death, haunts her. “Then there are days when I can distract myself,” she says. We all knew Carrie wouldn’t go too long without kicking a whole ton of ass. She’s one of the truly bad motherfuckers of television. Nowadays she’s beating men up in the streets at night. Badly. I love that she’s allowed the same quality of character as the men in the show; she is amazing and flawed all at once, as is Hood. That’s why Banshee, for all its excess, has a lot to offer. The male and female characters are equally well written, and honest, raw.
Hood is tortured by the death of Rebecca. As well as the recent past. Seventeenth months before he wasted away in a hotel room, drinking, staring down his gun and pondering the point to life. In the aftermath of what happened to Job, to Gordon, to everyone. Who wouldn’t go insane? Well Rebecca came to him; ahh, the point of the memory! She took him out of the dingy hotel room, to that old cabin on Kai’s land. Seeing them together, knowing the present and seeing Hood in the state he’s in, the whole situation is brutally tragic.
Having had his tattoo burned off Kurt’s got a hardcore scar. He’s also got a wonderful woman at his side, but she’s worried. As any woman would be for her man who was once involved in the nefarious White Power movement. Calvin (Chris Coy) is still trying to be friends with his brother Kurt. Although Kurt, like anyone in his position, wants nothing to do with him, or the Nazi crew.
Another favourite of mine, Clay, is out knocking skulls. He’s got to take care of the drug territory beefs with the Natives.
Calvin, who works a normal day job while repping white supremacy at night and whose boss is not white, he daydreams of bloody murder. He’s also got other plans happening. Such as dealing with Clay, and a man with his head in a vice. This is one nasty little scene. But as much as Calvin is a terrifying man, Clay is far more horrific.
And the woman Kurt was having sex with earlier? His brother’s wife, Maggie (Casey LaBow). Wow. Now that is something I did not expect.  That only adds another layer to all Kurt’s problems.

After so long, Hood shows up at Sugar’s bar. Very nonchalant. “Like somethin‘ out of the Bible,” Sugar claims. Their friendship’s obviously in the shitter. He up and disappeared for such an extensive period of time. And following such a massacre and a blow-up of a situation. Nevertheless, Sugar’s willing to help Hood a little going forward.
Deputy Cruz is already proving to be a tough customer. She’ll hopefully be another strong female presence in the series, at least for this final season anyways. Looking forward to more of her.
Hood and Proctor end up coming across one another. They catch up, chat, in their usually stand-off fashion. Except now they’ve almost switched sides, though, Proctor’s clearly still living his gangster ways; he has the protection of official office.
This season is really interesting because of the different juxtapositions of power now. How everything is jumbled, from Lotus to Hood, to Carrie completely on her own now. Everything is so starkly different from where we last left everyone. Another time jump puts us back eighteen months, with Carrie and Hood on a job together. Hood’s tracked down the infamous Dalton (David Harbour), the man who kept him, tortured him, supposedly for the military all those years ago. Either way, Hood wanted to track down Job. But Dalton says he’s dead: “You know it, and I know it.”
Back to the present. Carrie still worries about Job, too. Like any true friend would. Is he still alive, though? Or is Dalton right? Cutting back between present and eighteen months ago, we see the night Hood effectively gave up. On Job. On life. On his fake life. Amazing sequence, as we witness Hood literally watch everything slip through his fingers. Heavy.
Hood cuts his hair, shaves down the beard. He goes from Grizzly Adams back to something closer to his former Sheriff haircut, only a little longer. Further than that we’re also seeing him unburdened of the law. Sure, he doesn’t have it on his side anymore. But it cuts both ways. Nothing’s holding him back now. Nothing at all. For now, he’s investigating the murder of Rebecca on his own.
Where does it all go from here? We get a glimpse of Rebecca only a few days before her body is found. She looks in, unknown, on Hood, then elsewhere someone takes her in the night.