This episode starts with Mr. Rabbit (Ben Cross). He thinks of his daughter, her betrayals. Likely, he prepares himself for what she’s bringing for him. All he wants from Carrie – or Ana (Ivana Milicevic), as he knows her – is for her to give up Hood (Antony Starr).
In Banshee at the slaughterhouse, Kai Proctor (Ulrich Thomsen) receives a visit from brother-in-law Elijah Bowman (Steve Coulter). It’s about his daughter, Rebecca. He worries for her and doesn’t want to lose his daughter, like Kai himself has been lost. So Elijah asks that Kai talk with her. “I still pray for you Kai,” he says before leaving. Even though he’s been shunned, essentially, Kai still has people who care for him there. 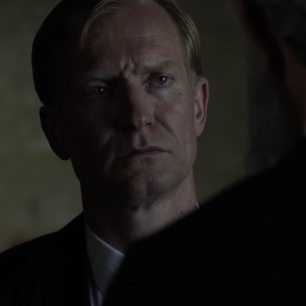 We meet Mayor Dan Kendall (Daniel Ross Owens) at home with his wife, Janie (Claire Bronson). She is a school teacher. And a worried wife. He doesn’t seem turned on by her anymore and that’s obviously unfortunate. More to come on them later.
At the bar, Job (Hoon Lee) and Sugar Bates (Frankie Faison) are arguing playfully, as Hood tries to settle their latest score. They’re all a big team now. Except Job is worried because Hood’s roped in by Carrie; she claims there’s a way to get money for the diamonds. But we know better, don’t we? She’s got other things planned.
Supposedly on their way, Carrie gets Hood to boost a car for them and she plants a needle in his back. This allows her time to get him somewhere appropriate. Not. Good.
In a convenience store, Deputy Emmett Yawners (Demetrius Grosse) runs into two armed, masked men robbing the place. Just as they’re executing the cashier it looks like Emmett will get it, too. He makes it out, though. Then gives chase. This leads Deputy Yawners over to the area of the high school. Things get really bad once the two armed, violent men find their way inside and this puts teacher Janie Kendall and the kids in detention right in the middle of a whole lot of trouble. Hostage situation time. The two men are actually brothers, Lance and Nathan Mangan (Kevin Gage/Doug Kruse). To make matters worse, Deva Hopewell (Ryann Shane) is in there with them.
Note: cinematography in this episode is excellent, so frenetic during the chase scene but not to the point of incomprehensibility, it was steady, intense, full of energy.
Carrie brings Hood to a motel room somewhere around the outside of the city. There, he’s chained to a bed. The diamonds are left on the dresser for Rabbit. Hood’s gagged, the television left on, and Carrie leaves him there at the will of the mad Russian gangster.
Back in Banshee, the cops are trying to manage the brewing hostage situation inside Banshee High School. Deputies Brock Lotus (Matt Servitto) and Siobhan Kelly (Trieste Kelly Dunn) arrive to help Emmett. Things are deteriorating in the gymnasium, where one of the brothers, Lance, is getting a bit crazy. With Hood unavailable by phone, Lotus tries to figure out how to proceed.
In the motel room, Hood slowly manages to start working his way out of those cuffs, off the bed. Only he drops the tool he managed to get his hands on; a little pen. At the same time, on television he sees the hostage situation back in Banshee, he sees Deva on a cellphone video from the scene, and this propels him into utter rage.
As Rabbit and his men approach, Hood rips the headboard to pieces, just as Job bursts through the door – turns out he’s got a tracker on the Sheriff’s phone. Nice work. They get out in time to leave Rabbit with nothing. This obviously sends the gangster into a fit. Hell to pay for this one. 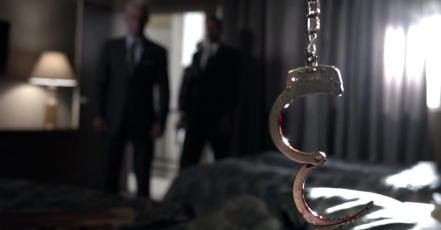 But in the gymnasium trouble is getting nastier. While Nathan doesn’t want any further problems, Lance decides to take Janie back by the bleachers to assault her. Fortunately, a call comes through, as Lotus interrupts briefly. Something needs to happen soon, or else bad things are going to occur.
Carrie finally arrives outside, so both she and Gordon (Rus Blackwell) are worried sick, looking on helpless. At the same time, Brock is negotiating to get some of the kids outside. Except for Deva, she and another girl take off into the halls after a confrontation with Lance. Finally on scene, to the surprise of Carrie especially, Hood shows up; ready to fucking rock. He heads in without back-up, no gun. As usual.
With SWAT incoming, Hood’s inside anyways. He ends up taking down Nathan, then shit hits the fan. SWAT moves in, as Hood chases down Lance who’s after Deva and her friend. A tense confrontation ensues between Lance and Hood, as well as SWAT after they show up. But Hood and Deva look at one another, he motions to her and she responds perfectly – Hood pops Lance a good one. The whole thing ends with him, dead, and Deva saved. Had Hood stayed tied to that bed, no telling what may have happened.
At Sugar’s bar, Kai and Hood chat a little. Particularly the gangster notices how all sorts of “Hell followed” with Hood after he arrived in town. Very true. Though, it was never a quiet place to begin with, as people like Proctor have been kicking around long enough.
Sugar: “What would we be without our secrets?”

In his little apartment Hood finds Carrie waiting in the dark. He pulls his gun on her. His eyes well with tears. Their connection is incredibly intense, it lasts and lasts. When she says sorry, though it’s hard to believe, it is believable. Hard as he tries, Hood can’t not believe her deep down. Their emotional connection scorches all that stands in their way. It is raw, painful, yet so beautiful. But flawed in so many senses.
More trouble is rolling into Banshee. One of Rabbit’s men, Olek (Christos Vasilopoulos) is kicking around, and that can only mean problems. 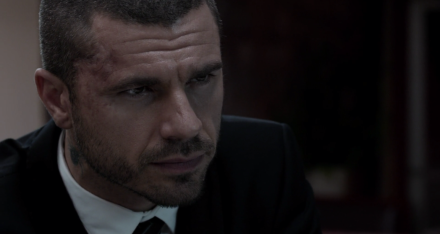 Next episode is titled “We Shall Live Forever”, and continues the season towards is exciting, adrenaline-fueled finale.