Anthologies can often end up a mixed bag of tricks simply because of numbers. When you put a bunch of filmmakers, albeit doing their own respective short films, into one container, there isn’t always a good flow. For instance, I thought V/H/S was a lot of fun, whereas the second installment of the series felt more varied in its quality. Then there’s Southbound, which was nearly perfect. Similar to that is the (duh) holiday-themed Holidays. With a slew of directors and writers, as well as a cast that contains several well-known and relatively new faces, this anthology tackles Valentine’s Day, St. Patrick’s Day, Easter, Mother’s & Father’s Day, Halloween, Christmas, and of course New Years Eve. Holidays does away with any notion of sentimentality or Hallmark movie moments. Gone are the strictly comedic adventures of the Griswold family. Nowhere will you find any cute renditions of holidays turned into romantic comedy fodder. This isn’t even a creepy Santa Claus horror flick. These directors and writers take us into the heart of any fear possibly associated with the holiday seasons, from getting that last gift on the shelf for your boy or girl, to unrequited high school love, to motherhood, and so much more.
Prepare to get dark.
Oh, and happy holidays.

The first segment of Holidays is disturbing, top to bottom. Yet at the same time there is a tender element, if only brief and fleeting. A forbidden love story, sort of. A coming of age tale. Truthfully, one of the girls in it really annoyed me; her bullying was spot on, just so damn irritating. But it works, her character is truly terrible. The style of this segment is so retro and also modern. Little dreamy bits make their way into the plot, as Maxine (Madeleine Coghlan) falls deeper into her own imagination; I didn’t even have to know beforehand that Kevin Kölsch and Dennis Widmyer directed this segment (they did the fantastic Starry Eyes). Their style of directing is unique, as much as it is awesome. This Valentine’s Day short is gruesome, disturbing, uneasy. A nice way to kick the whole thing off. There’s not even much explicit nastiness, aside from the very end, and still it manages to get savage.
Next up is the St. Patrick’s Day short from Gary Shore, director of Dracula Untold. While that movie was mostly a big load of shite save a few moments, Shore does a fun job with this segment. The focus here is on a school teacher. She looks after the young children in her class, one of whom – a little ginger haired girl – is a bit creepy. Over a couple weeks things start to deteriorate for the teacher, as she has strange dreams, as well as deals with the ever weird behaviour of her little redheaded student. Although I could begin to understand where this was headed, Shore does a great job at making this a highly unnerving little short. The whole thing just made my skin crawl and really took me by surprise. Usually relegated to Leprechaun when St. Paddy’s creeps around each year, I only wish this were a longer bit of work. It’s darkly comic at times, creepy, even downright frightening, spectacularly weird. I hope Shore goes on to do some longer bits of horror, other than big Hollywood fluff like his first feature. His horror chops are strong and sharp here.

Nicholas McCarthy personally wowed me with both his first two feature films, The Pact and At the Devil’s Door – two great little indie horror flicks. His Easter segment is dark and mysterious. It takes a great dig into the foolish holiday, as the little girl questions her mother about what Easter is all about – why eggs and a bunny when it’s supposedly about Jesus? Well, her mother doesn’t know either. When the Easter Bunny arrives – and he does arrive – it is the most horrific depiction of the creature you could manage to conjure up. The fact McCarthy even thought to do what he’s done here is outrageously impressive to me. Honestly, quite possibly the single scariest creature out of any horror film I’ve ever seen with my two eyes. There are some good ones out there, some great ones. This Bunny is right at the top of the heap. Plus, McCarthy turns the concept of the Easter Bunny (and other such figures) into something out of a nightmare, especially with what happens after the little girl is the first child to ever see him. Uh oh. 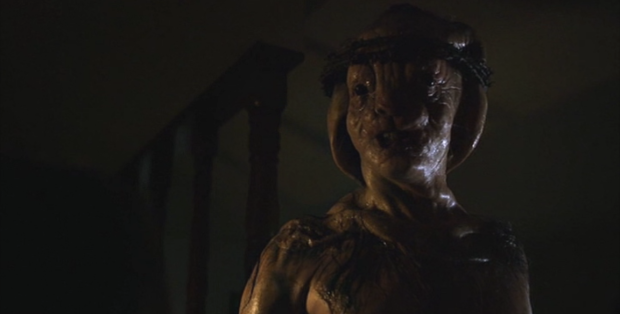 An interesting Mother’s Day segment comes from Sarah Adina Smith, director of last year’s The Midnight Swim. A young lady is pregnant, having already terminated several pregnancies, and does not know where to turn next; every time she has sex, she gets pregnant. Every damn time. The latest doctor tips her off to some fertility ceremonies out in the desert, so off she goes with hopes of finding an answer somewhere. Everything devolves into utter madness after she takes drugs – a.k.a medicine – at the fertility spa, discovering that each pregnancy, each abortion only makes the life growing inside her stronger. But there’s more than just a bit of hippie bullshit going on at this spa. And before they all know it, the pregnancy’s become something altogether other from a child in her belly. The whole thing is eerie and suspenseful before coming to a wild end. I could have used a little more, honestly. Overall, though, Smith does a good job making her short memorably unsettling.
From mothers, we move to Father’s Day directed by Anthony Scott Burns (Darknet), whose best work I know of is on the fabulous indie The Last Will and Testament of Rosalind Leigh. Here, he crafts a spooky short which begins with a young woman named Carol (Jocelin Donahue; The House of the Devil) opening a gift, a tape recorded by her father. What follows is a chillingly tense journey towards a reunion. Along the way, the sound design, the score, the steady tracking shots, the beautiful wide angles, it all winds us up for a super haunting end. Kept me on edge and paid off without having to go too over the top.

Kevin Smith’s Halloween – Hollow Ian, as he puts it – takes us inside a little webcam porno operation, led by Epic Meal Time star Harley Morenstein, as well as Harley Quinn Smith. The whole thing is fairly dreadful, in the right way. Behind everything is a subtle, rattling score that begins as a low piano piece then grows into something more brutal, more sinister. We’re eventually given over to a thriller that gives three young cam girls their long due revenge over a tyrannical, misogynistic boss whose treatment is far less than equal or any bit good. Love how the revenge starts off sort of comical, then escalates into more brutal, nasty, low end stuff. Smith’s writing here is both funny at times, specifically Morenstein’s character at first in his predicament and the girls all around, as well as filled with depravity. I want Smith to give up everything else and continue making horror films because he has a unique, fun voice that brings something interesting to the table.

Director-writer Scott Stewart takes us next into his deep, dark vision of Christmas. It’s a very human drama at the start mixed in with horror, as Seth Green plays a desperate husband and father, willing to do something terribly unfortunate to make sure he gets the last of a special Christmas gift in stores for his son. What’s most interesting is how the gift itself plays into the father’s situation. This could’ve easily remained a dark psychological thriller, but opted rather to explore an almost science fiction type plot that made things exciting and turned into an altogether different piece of work halfway through. This one kept me guessing, it also had lots of dark comedy to make things ride along well.

Finally, New Years Eve rolls around, directed by Adam Egypt Mortimer, who did the vicious little horror Some Kind of Hate. This vision of December 31st is psychotic, nasty. Lorenza Izzo and Andrew Bowen star as Jean and Reggie – two people who meet online for a first date out at a restaurant, only we know that Reggie has recently shot another woman in the head. Hmm. Well, this is one of those cases such as Alfred Hitchcock would’ve liked, or done similarly in his own films, because we’re given that bomb, shown upfront the danger, and now we’ve only got to wait until it explodes. So the suspense and tension coils around us seeing Reggie with Jean, even worse after she invites him back to her place, then everything gets vastly more creepy. Problem is Reggie’s underestimated the situation and never could’ve prepared himself for meeting a girl like Jean. LOVE LOVE LOVE the writing in this little short. So brutal and macabre and just so much damn fun! After things really break loose there are a few moments of blood and gore that pay things off magically, even with a New Years Eve countdown on the television behind the chaos. Also, can never get enough of Izzo, whose presence is always thrilling in some way.

Overall, a 4&1/2-star anthology. This one is up there for me with some of the V/H/S stuff, as well as the recent, amazing experience that was Southbound. The use of all the holidays in unique ways, the terrifying bits and pieces of each segment, the writing, the directing, the acting, the practical makeup effects in many of the segments, it is all so joyfully executed. You can tell when an anthology feels forced, as if none of the work belongs together in one frame. However, Holidays fits together in such an oddly appropriate way. The segments flow from one to the next keeping you off balance. Indulge yourselves. This is available now on VOD platforms, and soon will see a limited release. Watch this, support these filmmakers. Because the smaller indie productions are where all the good stuff is happening. If we keep supporting independent work, hopefully this will keep lots of smaller horror (and genre) pictures alive.