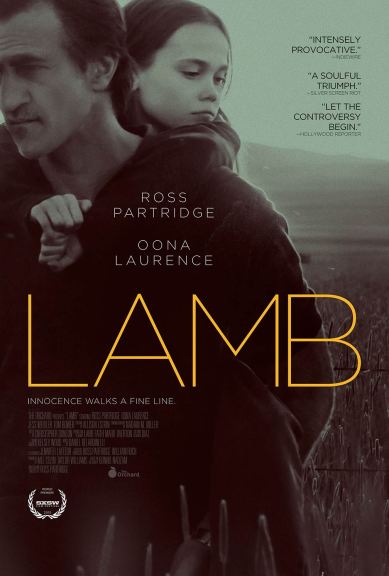 This is a difficult movie, in every sense of the word. It’s hard to rate. It’s hard to understand, both in intent and in the message it puts across by the end. Although I’ve never read the novel Lamb by Bonnie Nadzam, there are bound to be things lost in translation from book to film. Even seeing only this adaptation I can understand why so many book reviews compare Nadzam’s protagonist(/antagonist) to Humbert Humbert in Nabokov. However, the comparisons can’t be too close, as there are significant differences in theme.
Lamb is a terribly difficult confrontation of love’s dangerous possibilities. At the same time, the film explores this through the eyes of a lonely, washed up sort of man whose intentions are never fully clear. What director-writer-star Ross Partridge does is craft an atmospheric drama that also plays much like a thriller. The closer to the edge of morality Lamb takes us, the harder it is to pull away. And even in its most tense moments, no matter how it makes you feel, the characters will make you question just how you’ve gotten to that point.

David Lamb (Ross Partridge) just lost his father, as well as his marriage. Everything is falling apart at work, too. One afternoon, sitting on a curb and ruminating on his shit life, David is confronted by a young girl named Tommie (Oona Laurence). When he tries to be a father figure they begin a friendly relationship. But then he decides to invite her on a road trip. Except her parents don’t know. Nobody does.
So off they go. And as their trip to the mountains begins the line between what’s acceptable and what isn’t slowly blurs.
David also heads out onto his own journey of self-discovery, which is never, ever easy. He and Tommie discover things about life they’d never once imagined.

The one scene that actually made me feel downright frightened is when David spills coffee on Tommie, then insists she get in the bath. While the spill of the hot coffee wasn’t intentional there’s part of you that wonders if something like that wasn’t coming all along, at some juncture of the journey. But his insistence, his refusal to leave the bathroom even when the curtain’s drawn over the tub, his turning on of the water, so much of it speaks to that control men with paedophilic tendencies seek to gain. He slowly but surely pushes through her boundaries.
People want to debate whether he did anything sexual to Tommie. Sure, you can definitely consider it a debatable topic. However, my offer of proof is David’s breakdown later when he says: “If you discover that one day you hate me and you‘re angry with me and that I‘ve ruined your life, at any time, if I‘m 90, you‘ll tell me, won‘t you?” He gets even worse, more angry towards himself in the scene. To me, and this is merely personal opinion, David has admitted right there and then that something not right has occurred. Now maybe that’s not sexual, maybe he just feels the boundaries were pushed too far in general. Not sure. But something certainly happened, whether it’s simply the overall tone of their relationship, or something further than we saw onscreen went down – who knows. There’s just something about that speech from David, the emotion in him, which really says he’s done a bad thing. Plenty of his previous behaviour already speaks to that. This later moment is probably the most overt of them all.
Perhaps, above all else, David/Gary’s exertion of control and power over young Tommie is due to his narcissism. He may not be a paedophile at all. He could simply be the loneliest man on earth. Driven to, essentially, kidnapping a child just to reassure himself, just to have someone to love him – to make someone love him. After his life collapsed he needed something, anything. Whether he was sexual with her is up for debate, but either way his disregard for Tommie’s feelings and her innocence and childhood is horrific.

What’s most interesting, despite the tough subject matter and themes, is how Partridge manages to make this an emotional drama. There is a quiet beauty to the entire work. Even when I was horrified at the implications of many scenes, the way it’s presented comes off incredibly mature and written, performed, directed with great care. This movie is one tough sell. For some it may repulse them immediately once the plot kicks in. For others, the odd charm of its danger will lure them through to the finish. Patridge directs elegantly with the luscious cinematography of Nathan M. Miller at his side. There are so many gorgeous looking moments for such a morally disturbing and challenging story.
Both Partridge and young Miss Laurence do a fantastic job carrying a difficult piece of cinema. The final moments, regardless of how unsettling the relationship was, completely tear out your soul. Without someone young and charismatic like Laurence, this role would never have been filled with life. She managed to make it into a performance of depth and essence, not a small feat for a child actor. For his part, Partridge’s ability as an actor has impressed here because he makes you wonder, he keeps you guessing, and never are the inner workings of his mind too evident. There’s always some part of him to keep you off balance. Their chemistry is undeniable and made this movie into drama with weight.
A veritable 4-star experience. Put to the side your judgements, let it flow through you. See what happens.