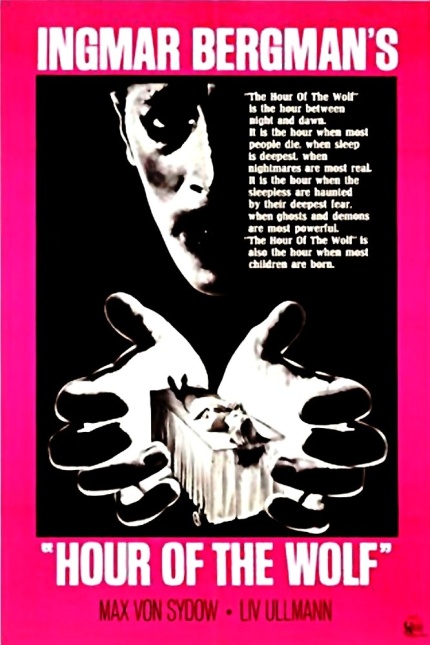 1960s Ingmar Bergman is my kind of thing. His other stuff is great, too. But that’s a moment in time where Bergman is most significant to me personally. A few films came about in the ’70s I love. However, during the ’60s Bergman did Through a Glass Darkly, Persona, The Silence, Shame, and Hour of the Wolf.
Depression and anxiety, any other mental illness, is never easily shown through visual representation. Because it is such a subjective, yet wholly universal concept. Furthermore, not enough attention is paid to the mental health of artists. Especially in a day and age now where we see many celebrities struggling with depression, et cetera, just like all the rest of us normal folk, Hour of the Wolf is a shockingly honest look at the blurred edges of creativity and illness. Bergman himself must have understood what it’s like to feel trapped between wanting to create and having a head full of demons needing to be exorcised.
All artists, like the artist here, find themselves lost in the work. The art often gives way to what’s stuck inside the artist, up in their head. This movie examines a liminal space where the artist exists, somewhere half between dream and nightmare, someplace close to the truth yet never quite getting there all the way. Most of all, Bergman dives into personal territory, so much so he felt a need to distort reality. He was likewise compelled into drawing attention to the metafictional space where art exists, like a play caught between its onstage and backstage/offstage persona.

Longtime Bergman companion cinematographer Sven Nykvist captures this black-and-white film in such vivid, haunting detail. I love some of the first moments with Ullmann’s character Alma, as we’re fixated on her. For a personal journey concerning the artist – Max von Sydow’s Johan – we’re actually seated in her perspective, which makes the film that much more interesting. In those first moments, it’s almost like she talks directly to the audience, or rather she’s talking to the camera. An incredibly well composed shot catches her beautifully.
Later, the island’s visuals provide a great landscape for what comes to be an eerie story. This is also aided by the editing style of Ulla Ryghe, also working with Bergman on several of my favourites out of his catalogue. Ryghe transitions us through one scene to the next dreamily, which of course gets more feverish, anxious, and also, at times, more lucid.
The sound design in any Bergman film is spectacular, here it’s nearly at its best. So much quiet, near silent moments, often close to the ends of scenes when we’re left to sit with the dialogue and imagery which preceded them. Plus, the score sitting amongst the background in the dark, lying in wait throughout the shadows, it keeps things creepy, unnerving, and unpredictable most times. Surprisingly, composer Lars Johan Werle only did three films – this, Persona, and a movie called The Island from director Alf Sjöberg. Too bad, as this score works perfectly to compliment all Bergman’s gorgeous oddities.
As with all his Bergman’s films, the actors are first and foremost the largest part of why things work. Here he relies on a close quarters relationship between man and wife to fuel the energy of this dramatic horror. Max von Sydow and Liv Ullmann are the subject of the intense lens through which Bergman examines the weight of being an artist, the fine line between artistic genius and mental illness, as well as the burden of having to live with an artist/someone mentally ill as a spouse.
The camera lingers on the faces of the couple, respectively, and together. We’re forced to sit with them, unable to move away. Which is interesting, due to Bergman’s emotional distancing from the subject including the opening with audio from the set leaking through. It happens later at the end, too. So there’s this almost emotional disconnect that Bergman provides us. Throughout the runtime between credit sequences he forces us into this highly personal, emotional, evocative filmic space. Before, and after, he allows a brief reprieve. Because once you let the story sink in and all its imagery, the personal relationship between man and wife deteriorating, Hour of the Wolf draws you into its mania and all its quiet terror.
Further than that, Bergman lulls you into believing this may be a personal chamber drama set out no an island in a little cabin. Until the ominous events begin to pave way for something altogether horrific.
One of the first really unsettling scenes is the dinner party. The close up framing of the guests, lingering on Max von Sydow steadily, watching him all but fall apart, the loud voices speaking so many at once, it is an entirely strange experience. And you can feel von Sydow’s anxiety, thick enough to cut through it with a knife. This kicks off much of the hallucinatory imagery we experience, increasingly strange as the film wears on.

The finale is terrifying. After Johan is dressed up to meet with his old lover, his face painted, a robe (costume) put on, he’s thrown into a moment of open, raw honesty. He finds himself bare in front of everyone. The audience of the dinner party stands by watching him, laughing, applauding. We can take this as the artist feeling forced into baring his soul. Or rather, once you’ve shown your art to the world you are bare to them. No longer is the artist at his own whims, but at the whim of an audience. In this case, a highly demanding and ruthless audience.
“The mirror has been shattered,” Johan says to himself, to the audience, the camera. And it has. There is no longer a mirror between the artist and himself. He is looking directly at us, both figuratively and literally.
Essentially, this film becomes symbolic of the process through which an artist creates.
By the end, the artist has entered into a space where there are no secrets, nothing is hidden. This phase is initiated after the woman takes off her face at the dinner table. After which there are no longer any hidden lives. Johan proceeds to literally strip down, dress himself up, and put on his real face; to perform, to make art. Afterwards, as Johan moves further out into the forest and winds up butchered, this symbolizes Alma completely losing him. He is a part of something bigger now in his life as the artist. He belongs to the world, to the others, and no longer is he simply Johan, husband to Alma.
A great clue comes in the end when Alma talks about how he referred to those other people, the types like those attending the dinner party earlier, as cannibals – also a tentative title for this screenplay years before when Bergman was fleshing it out, making other projects before coming back to this one with its new title.
Because these cannibals are those artistic cannibals. The ones that prey off the artist, feeding off him, whether that be economically, socially, or even just the idea that audiences take a part of the artist with them after experiencing their work. Either way, so much of this film’s theme is evident in that last monologue from Alma as she uses that curious word, and we finally see those dinner party guests for exactly what/who they are truly.

Ingmar Bergman’s only horror film is a strangely personal, realistic, yet voyeuristic and metafictional-type experience. Hour of the Wolf is a masterpiece that does not get the recognition it deserves, simply because Bergman has a filmography which speaks to his status as a giant of cinema, a true-blooded auteur, through and through. His artistry makes this psychological horror one of best, most thrilling films of the genre during this era. There are so many haunting images in this single film that it’s amazing more people don’t champion this as the scary piece of work it is, and though there are definitely fans there just are not enough.
Speaking in an emotionally raw tone through his film, Bergman perhaps gives up more about himself here than in any other of his cinematic works. One of the reasons he claims to have left in the bits with the sounds of the crew, the evidence of a movie being made, self-referentially calling to mind: you are watching a film, a horror, a movie is happening and you are outside of reality. This shows us, clearly, that Bergman tries to relate with us his feelings about being an artist, about being an artist and feeling completely mad, about having to try and live with someone you love closely while your mind feels as if it’s breaking apart, and you’re giving every last part of you to the world while then also trying to give your all to that loving, loyal partner.
So many things happen in this horror movie throughout the space of 90 minutes. Even if you’re not into Bergman, give this a chance. Hour of the Wolf is potent stuff.