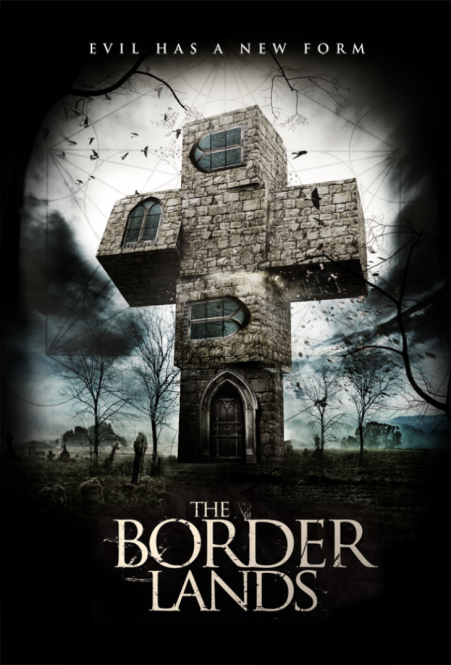 Found footage in the independent film world of horror surged in the past 10 years especially, which has left us with more than a fair share of mediocre to shit efforts. I’m a big fan of the sub-genre. The whole technique of found footage can be used to great effect, depending on the story, the writing, and the overall direction. What’s exciting is when a movie using the technique decides to come with a different story, not the typical people running lost in the woods – often young people – with tons of dark, shaky camera work and lots of screaming, wailing, terrible audio.
The Borderlands boasts an intriguing story about religion, the dark side of faith. In a way, you can take it as an allegory about belief and how it consumes people wholly, far too often. On the surface, this is a solid piece of found footage work that opts to use a premise that hasn’t really been done yet, at least not well. Using the plot of a Vatican investigation concerning the strange going-ons at a remote church out in the woods, writer-director Elliot Goldner cultivates creepiness that still haunts me when I imagine those final scenes. A slow building, burning story moves towards its resolution that comes as an unexpected, disarming finale where the terror these men once thought benign is far greater and more disturbing than they’d originally thought when first starting on their journey. The found footage itself is nothing innovative. The story and the adventure on which it takes us is a horrific little slice of cinema that’s better than most of its similar kin.

Anything Vatican related in horror I find awfully compelling. There are definitely horror movies that misuse those types of stories, but some can make it effective. Goldner frames the entire plot and story through these men investigating a supposed religious miracle for the Vatican. We’ve got the religious fellows – Deacon (Gordon Kennedy) and Mark (Aidan McArdle) – juxtaposed with a technical equipment guy, Gray (Robin Hill) – it’s great to have that one guy who isn’t fully religious, as it presents an entirely different dynamic than if we were relegated to main characters solely painted as religious believers. Even though Gray does believe in “stuff” as he says, there’s still a disconnect there which allows the non-faithful argument to enter into the situation.
Even better, this aspect leads into the horror. When things start becoming genuinely frightful and the situation at the remote church reveals itself as legitimately dangerous, the non-believer in Gray gives us a vessel into more terror, as he starts understanding there is a power greater than him. Whether that’s a terrifying power is another story. In opposition, Deacon is a faithful man working for the Catholic Church, yet he’s also a sceptic. He is trained not to believe any miracle at the drop of a hat, and what he’s seen over the years informs that. However, that bit of disbelief in any true miracle (or whatever you want to call what they later stumble across) allows Deacon to help us descend into the fear of the film much more easily. Combining these characters and their respective attitudes is a potent way to involve us in the characters. An element we’re not always privy to in the found footage sub-genre, where jump scares and messy, overused gore can sometimes take precedence over anything in regards to character development.

There are Stephen King-H.P. Lovecraft vibes going on in the story. After the finale, you’ll understand that wholly. But even before we’re able to grasp there was some paganist religion happening in the church, an attempt at concealing the building’s history, as well as what happens inside its walls, what lies beneath the floor. Highly reminiscent, though without copying and merely by homage, of the short story “Jerusalem’s Lot” from King’s Night Shift (1978) collection.
What I love is how the build up comes slow and steady. First it’s a video, that could or could not be fake. Later, Gray gets everything live for audio, even bringing along some ghost hunting-type equipment that helps them suss out any odd electrical signals, anything to point towards the situation being manipulated. When they begin hearing sounds in the walls, unable to locate a source, this is the eerie beginning of moving towards the story’s revelations. They start hearing the cries of children, other such noises. The most unsettling? A deep, low bellow that nearly resembles a voice.
Coupling Gordon Kennedy with Robin Hill is an interesting combination. They work well together as actors, and their characters fit perfectly. Kennedy is a solid talent who makes Deacon come alive, he makes the religious empathetic, and he’s atypical of found footage actors because he isn’t overly melodramatic. Alongside him is Hill, an actor I’ve enjoyed ever since first seeing Ben Wheatley’s Down Terrace (he’s a film editor, too). Hill plays Gray well and often provides a bit of comic relief amongst all the grim subject matter. His believability makes the horror of the finale all the more real, unnerving, visceral. These two actors sell the scariness in this film, which can’t always be said about other found footage efforts where the actors seem to be cast on the basis of their lung capacity.

This is definitely a favourite recent found footage flick of mine. There are many, and they seem to run the gamut of absolutely unwatchable to sometimes brilliant. I’ve seen a lot of these sub-genre pictures which defy expectation, many of those in only the past couple years. The Borderlands is one that I found pretty spectacular, even with its few flaws. Mostly, the religious angle, the church setting out in the forest, all these little details set it apart from other similarly filmed movies. And yes, we get our share of dark frames where there’s only a bit of light, some jumps here and there (although they aren’t typical either). Above all else, the story makes this unique. The actors keep us on edge and in their sceptical first, scared later perspective. Finally, it is the shocking and excellent finale that completely upends our expectations. For the longest time this feels as if it might reach a conclusion that can be forecast early on. Each time I watch this, I keep thinking how ingenious the last few moments become. Reaching those last seconds is a treat and I’m hoping writer-director Elliot Goldner will go for something equally exciting for the next film. This one caught me off guard. Whenever I need a little jolt, requiring a found footage feature to kick start my fear, this is one I usually think of before making a final decision. It may come on slow, but the climactic moments coming to the ending are a pay off worth seeing at least once.