I’m a huge Stephen King fan. I’ve read almost everything he’s written, still working on that. His short stories are some of the best short stories out there, as far as I’m concerned; up with greats of similarly fashioned literature such as H.P. Lovecraft and Robert W. Chambers and others. He’s not simply a horror writer like so many pigeonhole him. Everything he does certainly has a dark, macabre and morbid, eerie tone. Rarely does he write anything without his brand of strange. But his stories and the plots within them are all so fascinatingly dark and equally as human. Part of why King is able to touch so many readers is because within all the macabre madness of his horrific tales, those human elements are what hooks people. The characters, their situations, their hopes and dreams and the all too often dashing of those desires are how King gets into the head of his readers, then allowing him the chance to creep us out.
Misery is one of the rare King novels I feel is just as good onscreen as it is on the page. No discounting his work. Like I said, I’m a massive fan. One of the biggest inspirations to me as a writer, personally. However, this is one of his stories that’s more confined and simple in location, the story is not supernatural or anything in that vein. The strength of the novel is in its focus on character and setting. The film is so perfect for the fact these characters are so well developed within the constraints of the story and its limited setting. All the psychological, emotional, and visceral angles of the horror are anchored to the performances of James Caan and Kathy Bates. Director Rob Reiner makes a lot of solid choices, but no doubt about it, those two steal the show. 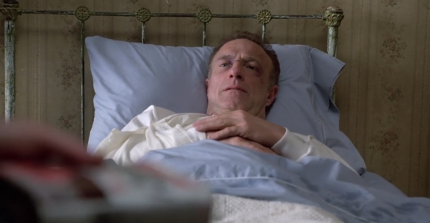 Caan is a solid Paul Sheldon. He has this sort of old school tough guy feel about him, so that when he’s got his legs beat to pieces, laying in bed and stuck to that wheelchair, he has this air of wounded masculinity. Not in an obnoxious sense. In the way you feel bad for him. Furthermore, you know even if it was just one banged up leg, he might manage to get out of the situation. But he’s helpless in this situation and it renders Sheldon someone we empathize with, which Caan plays up so well. Better still is how he gets crafty after so long, and that’s something Caan uses to great effect. There’s always this awesome fine line with Caan where he’s serious as hell, and simultaneously funny, on the verge of always being able to make you laugh or smile. One of the best casting choices in any King film.
And that brings me to Bates. Oh my, Kathy. You’re a treasure. In everything from her early role in Straight Time to the wild roles she’s done on American Horror Story, she is a chameleon of an actor. She can be the sweetest sort of woman in one performance, then turn around and wow as an evil, ruthless psychotic. Wilkes is the latter. At the same time, even after we know she’s crazy there is often something sympathetic about her. She feels like the ultimate lonely person. The loneliest. To the point of dangerously disastrous behaviour, such as when she kidnaps Paul. Bates really brings out the mentally ill side of Annie, though not in a melodramatic way. Nor is her psychosis laughable. Even when she gets foolish and says “cockadoodie“, which is worthy of a chuckle, the scary side of her is always present. Never does Bates allow us to forget the danger of Annie. She draws us into the weird and darkly funny aspects of the character while making sure the psycho-thriller angle is never far behind. 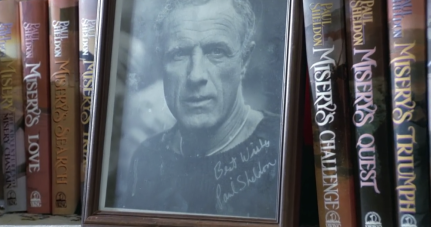 Best of all, the character of Annie Wilkes (Bates) feels far ahead of her time. Originally written in 1987, she’s decades before the unbelievable mania that is fandom. You can look back at Misery and see it as a metaphor. About how fans demand what they want from the creators of the material they so dearly love. They demand so much, in fact, that it pains the creator, as they can’t always please their audience and also please themselves as an artist. Ultimately, Annie is the fandom that will not let artists (directors, writers, et cetera) grow organically, but rather impede development by wanting a show to be THEIRS. While a certain amount of what an artist does is out of their hands after they’ve finished creating it, there’s still a line that fans can cross. By stepping over that line you make clear it isn’t the artist’s talent which you’re in it for; you want a story that you dictate. Then it becomes something not of the creator, or in this case the author. Annie isn’t just some psychopath, though this works incredibly well on a surface level. She is further a representation of how fans can pin down the artists they admire with expectations, ones they wish to force.
In this day and age with Twitter and other social media platforms, Wilkes is an even better, more relevant character, as too often we’ve seen this direct connection between artists and fans create a headache for showrunners, directors, actors, writers, producers alike. Even to the point that nowadays these fandoms, or some of them, almost expect people (often this is the case with people running shows for AMC, BBC, HBO, so on) and the various networks to do what they want. This is no longer television, nor is is the movies. The fans are what put money into the production companies, in the end. Yet that doesn’t mean directors and writers have to be expected to put together material tailor made to every last fan. That’s absolutely, downright madness. Part of the excitement, for me, in film and television is NOT knowing. I like for writers to surprise me, directors, too. I don’t want to be able to telegraph every plot twist and movement. That’s boring. If that’s your bag, fine. But you’re an Annie Wilkes! If you want to have power to determine a movie or a television, how the casting or the plot or whatever goes, then you’re no better than her forcing Paul Sheldon into changing his book.
Today, people rage on the new Ghostbusters movie. Instead of just letting it be and not going to purchase a ticket, angry misogynists opt, like Annie, to try and burn the thing down. Exactly the way she made Paul crisp up his manuscript on the barbecue. Just let it be. Sheldon ending his character Misery could have proved disastrous to his career, maybe people wouldn’t want to read him any more once he moved on to something else. And maybe this new Ghostbusters could flop (retroactive note: it certainly didn’t do great). I personally don’t want it to, but it could. Only the rabid fans, Annie Wilkes, they can’t let things flow naturally. They have to have it their way, or no way. 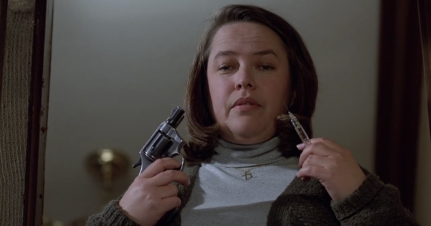 There are some truly horrific moments in this movie. This has psychological horror, as well as real, physical stuff to tickle the visceral nerves. Even just Paul and his broken legs is a bit of body horror. Although, once Annie decides to toss out her story of the early days in diamond mines when they hobbled workers for stealing, things get gruesome. For all the horror movies I’ve seen over the years, this scene kills me. Every time. Funny enough, there’s nothing explicit or graphic. You actually barely see what happens.
There’s just the acting – Caan screaming in savage pain, Bates triumphantly walking the room with her sledgehammer – the sound design, all the build up in Reiner’s direction, “Moonlight Sonata” playing in the background. Changed a bit from the book to cut down on blood, but no less effective in its brutality. This whole bit is not only creepy, it also starts us down a descent towards a desperately tense, suspenseful finale.
This is a 5-star classic. A masterpiece. One of the best adaptations of a novel to screen I’ve yet to witness. So many books either change too much or just can’t capture the original novel’s enticing charm to satisfy fans. As one lifelong Stephen King lover, I find Misery so satisfying, in every way. The plot plays out wonderfully onscreen, adapting well from King in William Goldman’s screenplay, and everything fleshes out properly to keep the journey exciting and just as compelling. By the time the final frames play, we’ve had a long, arduous ride alongside Paul Sheldon in his wheelchair.