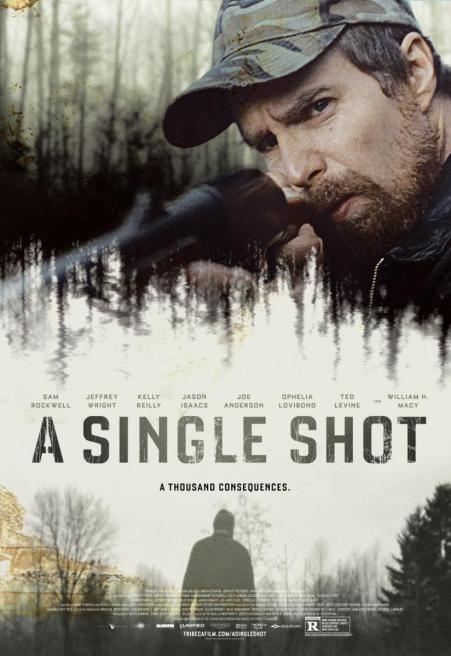 Let me preface this by saying two things.
First, Sam Rockwell is one of the finest actors in his generation, recognised as such or not. He’s essentially a character actor yet has all the energy and leading man look of a big star. Not that he isn’t one. He’s undeniably fun to watch.
And second, A Single Shot is easily one of the most underrated films since 2010. Sure, the pacing is slow. Does that necessarily make a movie bad? No, not at all. If that’s not your thing, then okay. Doesn’t make it a bad movie. The pacing here is appropriate. There are a lot of things happening, so there’s no reason to let things pass in a blur. Aside from that the atmosphere is thick as fog, so dreary, dreadful, moody. It’s all around a great film. Interesting characters, a central moral dilemma that paints a grim picture of guilt, all built on nice cinematography over a solid score and wonderful performances.
Rockwell is, of course, the anchor of the cast. Though it’s nice to see people like Kelly Reilly, Joe Anderson, Jason Isaacs, even a couple of my favourites William H. Macy and Ted Levine – among some others – all turning up in fine form regardless of the size of their parts.
The story is fascinating in its depiction of a small town, as well as the torment endured by its main character John Moon (Rockwell) after he accidentally shoots a woman while hunting in the forest. This is equal parts suspenseful and paranoid, exploring what happens to a man crumbling under the pressures of life while right on top of all his problems gets planted the deafening guilt of his unintentional murder.
One hell of a thriller.

Certain little touches about Moon are interesting. The way he drinks a bit of sugar after sitting down in the diner. How he doesn’t immediately meet a person at the eyes when talking to them, but slowly moves toward eye contact. Rockwell brings out a ton of idiosyncrasies about the man that are compelling. He’s a chameleon-type actor, able to sink into the skin of many different characters. His portrayal of a man torn by guilt is amazing, though it isn’t a one note performance. The character is written well, covering a lot of ground. Farm boy qualities are evident. Further than that all the history about his family, the farm, Rockwell’s able to show us all that pain without it descending into melodrama. You can see all the wear and tear on his soul, right in his face, how he talks to others and almost every aspect of his personality. Honestly, if people don’t find him enjoyable to watch I’m not sure what sort of acting they want. Other actors would overplay his guilt, making a spectacle of the character. Instead, Rockwell sticks with the atmosphere and the tone of the film to make John a pitiable man. At once you’ll be horrified by his accident in the woods and hate that he doesn’t do anything after it’s all over, except cover things up, and at the very same time you feel for him, his problems, the unfairness of his life.
For his part, writer Matthew F. Jones has obviously fleshed this character out more than enough between his novel and the screenplay. His writing translates over well onto screen, which helps Rockwell. Jones is able to quickly develop certain characters throughout the course of the plot. Jeffrey Wright turns up and we glean the essence of his character Simon fairly fast, as the dialogue between him and Moon sets that up. The writing is great, but I can’t say that the actors don’t all put up the goods. Jason Isaacs is a rather intimidating guy in this role, not the type of person you’d want to run into in a dark alley. Then there’s Obadiah, played by Joe Anderson (another solid character actor), and he’s just the typical sketchy, greasy redneck from these sorts of small towns; Anderson does well in the role and makes you truly not like this guy from the get-go. Even William H. Macy and Ted Levine in their minor roles are perfectly solid, giving life to their characters in a short bit of time. There’s not a soul in the cast that doesn’t make the story feel real.

The cinematography is fantastic, captured through the lens of Eduard Grau. He’s also responsible for equally captivating work such as The Gift, Buried, A Single Man, The Awakening, and other films. Perhaps at his best in this one. From the first moment we open on a foreboding, dark shot of the trees. Grau slowly brings us into the forest, where everything happens. Yet even once we switch over to John in his home, the landscape, everything is grim. Right from frame one the sense of darkness is literal, as well as figurative. Everything else that comes after is tainted by the ominous shadow cast across every last inch of the film. Some people may not like a slow burn plot, and that’s fine. I can’t help but feel people are being unfair, though, as this is a great story, the visuals and the score help carry the grim plot, and what more could you want? Not everyone will be satisfied.
The resolution, the finale, the film’s whole ending, this may prompt certain viewers to feel as if the story is predictable. I don’t exactly know where people were hoping this might go. Above all else, this is a morality play. If you’ve ever read some of the greatest novels concerning morality, crime (and so on), there’s not always a neat little ending. Nor is it always a happy one. Sometimes, yes. Fyodor Dostoevsky’s Crime and Punishment has elements of happiness and a certain despair at the end. While John Moon is certainly no Rodion Romanovich Raskolnikov, there’s a great parallel between the two.
BIG SPOILER AHEAD:
John’s end is partly what could have been Rodion’s in a different story, had he succumbed like Moon and died in the ultimate repentance for his crime; at the same time, we almost want to see John atone for his sins another way, through the love of his ex-wife, his child, a chance Raskolnikov did get while being the worse of the two. Absolutely we can draw similarities between their plights, though again Rodion was calculated and sort of horrific, whereas John was in the wrong place, wrong time. All the same, we know he had to pay for his mistake. He does, and even if some find it predictable, to me it’s no less chillingly emotional to watch him literally fall into his own grave, one he dug for the body of the woman he shot. In the end they share the same grave, one he physically and literally dug. Perfect literary, Greek tragedy-style irony. 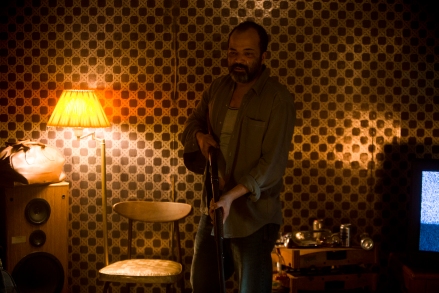 A Single Shot deserved a bigger release. It also deserves to find a home with fans down the road, which hopefully will happen. I know that Sam Rockwell fans such as myself are likely already on the train for this excellent, stylish, grim thriller.
For others, give this a chance. Turn the lights down. Ignore your phone. Let the atmosphere suck you in, allow Rockwell and the other actors to bring you to an unnerving backwoods town where loyalty is easily lost and trouble easily found. I can’t recommend it enough. This is so much better than all the big critics or any online sites will have you believe. Ignore their negative reviews and dig in.