The Season 1 finale holds many hideous delights.
Errol Childress (Glenn Fleshler) keeps his father strapped to a bed in a tiny shack, the walls written over with red paint in rambling mad words. The whole place is a horrorshow. It’s an old plantation-style home in the Louisiana bayou, out in some swamp. Inside the house Errol’s madness unfolds. He talks in a British accent now. He and his sister Betty (Ann Dowd) roam the decrepit home and talk in strange terms. She wants to “make flowers” while her brother’s concerned with “leaving [his] mark.” Their relationship is incestuous and deeply disturbing.

Former Detectives Marty Hart (Woody Harrelson) and Rust Cohle (Matthew McConaughey) have Steve Geraci (Michael Harney) in their clutches. They force him to watch Marie Fontaneau on that tape from 1990. This is where Geraci comes in having come into contact with the reports. Links up to a Sheriff Childress. All those blood ties. To keep Steve from doing anything crazy, Rust has his bar owner buddy Robert Doumain (Johnny McPhail) pop a couple shots into his car from far away. Sniper style. That and some backup. From having the tape planted on him, to other little bits.
But all the while Errol is still out near all kinds of children. He’s a painter, as well as a gardener. So he does lots of jobs, all over the place. Perfect for a serial killer like him. Yet Rust and Marty are biting at the heels of his evil deeds. They’re fleshing out the Childress family tree. And then a moment of genius strikes Marty. He stares at the green ears of the supposed spaghetti man who chased that girl years ago. After a bit of talk he wonders if maybe this guy is a painter. He finds a house that’d recently been painted. Perhaps those green ears on the scarred man meant he painted that same house. They interview an old woman who owned the house. She recalls the man that did the painting had scars on his face. They get deeper into the Childress history to find the father of Errol, William.
What I love about this detail is that this is what can often happen in REAL police work. Little details that go unnoticed could break open the longest of cold cases. So it’s nice that Nic Pizzolatto went for something organic and genuine for the way they come to start following this thread. Good writing. Fun to watch.

Both the former detectives take measures to ensure if anything happens to them, the truth will come out. Either way. Cohle has his sniper buddy with the tape, all that. For his part Hart goes to see Dt. Papania (Tory Kittles) who sort of agrees to help out in the event they need it. Then off the duo go, into the belly of the beast.
Out to the old home of William Childress they head. Rust tastes that old psychosphere rearing its head. Then once they arrive the macabre fun starts. Betty answers the door when they come knocking. But nothing feels right, certainly not to Cohle: “This is the place,” he gravely tells his partner. Marty winds up inside with Betty, as Rust has a brief run-in with Errol. The terror starts. Chasing Errol into the the deeper parts of the big plantation Rust finds himself almost in another world. The filthy house is one thing. The creepy, sprawling grounds of the old slave quarters from the plantation is spooky.
When Marty discovers the withered corpse of William Childress, he rushes off to find his friend going further into the world of Errol, the mad king. There’s an almost never ending number of hallways through the old tunnels. Each littered with symbols made out of wood, hanging objects of some eerie significance. All those markers of Carcosa and the Yellow King.
Through a tunnel of arched trees Rust comes to a skeleton, draped in yellow robes, on a makeshift altar. Then overhead he seems to see a black spiral in the sky, swirling. Out of nowhere Errol attacks him viciously. Rust takes a knife in the gut, tearing him apart. As the serial killer rips Rust’s stomach to shreds he says, creepy as all hell: “Take off your mask.” The two fight in brutal fashion once Cohle manages a few headbutts. Bleeding out, about to be killed, he’s saved by Marty who just about meets a savage death. Right before Rust pops one shot into Errol’s head, blowing his face apart. 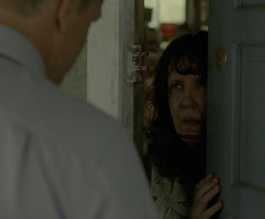 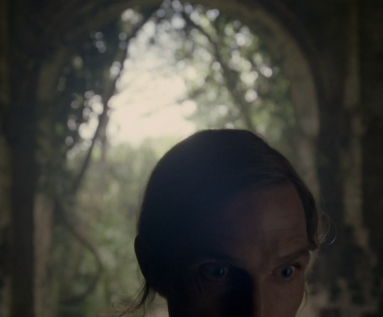 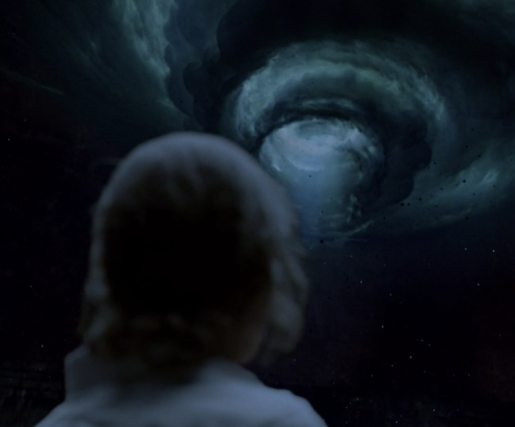 Afterwards, Dts. Gilbough and Papania figure out the Childress family were up to some wild shit. They’re still trying to piece it all together. At least the Dora Lange case is finally solved, though there are plenty of child molesting killers still lurking there in Louisiana, as the Tuttle family escaped without a scratch. For now, Marty sees his family and gets to enjoy at least one happy moment. Maggie (Michelle Monaghan), the girls, it all touches him especially after getting so close to death. Then there’s Rust, whose life has been changed in a drastic fashion. In the darkness of nearing death he spent time with his father, his daughter, all in some other place. He sees that there’s something else about life other than the pessimistic view he’s lived with so long. Now, he embraces the idea he might see his daughter again. “It was like I was a part of everything I ever loved,” Rust tells Marty with tears in his eyes. An amazing scene between two men who’ve been through hell and back together. Even though they stopped their evil and paid their debt, the greater evil still exists. The ending is slightly optimistic, though not entirely. Just in a microcosm. And that’s life.

To me this was the perfect way to end Season 1. A spectacular finale that gives us equal doses of the interesting existential ideas of Cohle and the macabre, creepiness expected out of the serial killer with his Yellow King/Carcosa references (ties into Robert W. Chambers’ book of short stories The King in Yellow). Loved this season. While I’m in the minority, I also loved the second one, too. Those recaps/reviews are available over here.