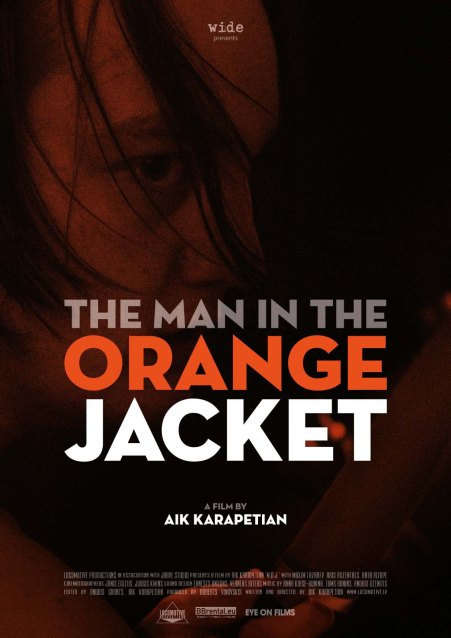 I don’t always look at films through an analysis of metaphor. Only when it’s really there and evident do I tread into that kind of territory. Aik Karapetian’s The Man in the Orange Jacket is a deeply unsettling work that doubles as a psycho-horror film and also a political metaphor born in blood.
Billed as Latvia’s first foray into horror cinema, Karapetian’s film draws on the Marx-Engels partnership of writing. He represents their idea of communism as a spectre, a ghost, as well as the figurative and literal class struggles represented in the killer (and who he kills). Maybe sounds a bit lofty, right? Yeah, it does. It’s all there, though. Not a perfect Marxist film by any means. However, the way Karapetian begins his film, the context in which he places the characters, these elements together speak to something else than a horror with a few blood spattered scenes. The titular man in the orange jacket’s actions at the beginning, the catalyst for everything afterwards, become an all too real metaphor for the struggle necessary for the proletariat to overcome the bourgeoisie.
What follows is the man discovers being a part of the bourgeois class isn’t without its prices: selling your soul and becoming a ghost of yourself.

The film’s opening act (each stylishly labelled in roman numerals before it commences) is phenomenal. Moreover, you’d think it might keep going on the track of operating as a run of the mill slasher. It has a similar feeling to the 1983 horror Angst, later emulated in the cinematography during a home invasion. You feel like the story’s going to be centred on a random maniac. And it is, in a way. But right off the bat we see that a big businessman has cut a ton of jobs after his workers go on strike, planning on going for a luxurious trip to sidestep the madness. One of his workers – the man in that orange jacket – sneaks quietly into his home, murdering him and his wife. This sets up the idea of class struggle, even if it were to play out as a typical slasher. Also note that he kills the boss and his wife with a hammer and screwdriver(close enough to the hammer and sickle if you want to get into that aspect), still wearing his orange jacket (a reflective safety vest): these are the tools, the uniform of the proletariat.
The concept deepens when the man decides, after tucking the bodies away in plastic, to get comfortable, enjoy some fancy food in a restaurant dressed up in an expensive suit and tie, eat his boss’ food and drink his wine, lounging in the lap of the bourgeoisie lifestyle. It’s after this the house starts feeling haunted. After the bodies are wrapped up the man heads for a jog through the forest. Coupled with an incredible piece of classical music this sequence feels dreamlike. A long, steady tracking shot takes us floating through the scene, then suddenly we’re back in the big house and the man’s listening to the music through headphones; edited seamlessly. So once the strange noises start, we’re already made to feel as if it could all be in his head. This feeling only continues and becomes more credible with further scenes which are suspiciously dreamy.

Once he takes off the orange jacket, he sheds the skin of the proletariat. He puts on an expensive suit, a watch, he eats at an expensive restaurant (like a pig with his fingers and slurping on soup and wine in sharp contrast to the upper class elements of it all). He sits in front of a lavish chess set, though makes no moves to play it. This is when the noises start. The house feels strange, haunted by a spectre, or spectres. Now that the man has filled his life up with material things, consuming commodities like they’re going out of style, he has forgotten who he is exactly. The man has lost himself. How quickly we forget who we were, from where we came. The man starts having dreams: a vision of himself in a bathtub, being drowned by himself – the man in the orange jacket. Later, he sees a man in an orange jacket across the lake, asking why he’s loitering, as if there’s something wrong.
After getting lonely in the big spooky house, the man orders a couple prostitutes. Watching them swim, he slips into a dream. Or is it? There’s a point where he slips between personalities: he urinates in the pool, juxtaposed with the high class act he’s been putting on. For a minute, he’s both the bourgeois and proletariat version of himself, jumping from lower to upper class in a heartbeat.
The creepiest is when he sees the man with the orange jacket inside the house; that spectre of himself, of communism, coming for him to violently overthrow the system once more. Except the man has no face. No longer is it just him; the man in the orange jacket is anybody, faceless in the masses. Gradually the face returns, but for a while it is a ghastly blank slate. And outside, it’s turned to winter. Seasons have passed, it seems, all in the man’s ignorant bliss of upper class living. Never are we sure what’s happened, or what’s happening. The only sure thing is the man has lost himself inside that house, as well as inside his head.

Karapetian’s film is a great slice of horror cinema, with doses of blood, nastiness, and it also has a brain. In the final shot, lingering into the credits, Karapetian focuses on a painting – some rich, haughty nobleman, wearing fur, stares down on the man. Earlier in the film the painting is noticeably visible, as if the old aristocracy is always watching him, us.
By the time everything’s over, we’re no longer totally sure if what we’ve seen is the truth, if it’s all metaphor. Karapetian could’ve intended this as a mind trip with no real aim, only to explore the psychosis of a murderer suddenly drawn into action.
I choose to see further than that. The man in orange is gone mad within the socioeconomic structure of his town. He’s succumbed to the forces of capitalism in a violent way, choosing to overcome his boss in an act of murder, assuming his life and achieving class mobility. Only that drives him mad even further. And what we witness is the morbid, thrilling ride he undergoes while climbing between one class and the next.
In the end, the cycle of class struggle is endless. Those who came from the bottom often forget this, forget themselves, becoming lost in a brutish world of their making. It repeats itself, doubling in, like the man seeing himself as the vision of a murderer coming to kill him. Marx and Engels might find great meaning in this horror. Or they might chastise me for buying it from Google Play.