With murder on the hospital grounds, Cathy Munsch (Jamie Lee Curtis) has more trouble on her hands again. Chanel #5 (Abigail Breslin) is being sweated by the police, even though she was stuck in the hydrotherapy tub the entire time. Lots of whodunnit already! Chanel #1 (Emma Roberts) and #3 (Billie Lourd) arrive to circle their other namesake, berating her about not getting any dick at all, especially in light of Dr. Cassidy Cascade (Taylor Lautner) and Dr. Brock Holt (John Stamos) respectively asking them out. Of course, it’s like nobody believes #5.

Back with Drs. Cascade and Holt, along with Zayday (Keke Palmer), the Chanels suffer through another consultation being insensitive as usual. This latest guy, Tyler (Colton Haynes), essentially has these tumours forming bumps like pebbles under his skin, all over. Wonder how this might play into the episode, or if it’s just a bit of background mess. In the meantime, Zayday worries about Munsch and her motives for running this hospital. Zayday doesn’t like how things sound about the latest murder, and well, she was around for Season 1. She knows what that crafty bitch gets up to now and then. “I think she wants revenge,” Zayday says re: Munsch. And she asks Chamberlain Jackson (James Earl) to help her out with a bit of low key investigating.
Out at the movies, Dr. Holt and Chanel #1 bond over being horrible people. Ironically The Hand is playing (as well as Pieces). We start seeing more of Brock’s “out of control hand” and she talks about “his hot mouth” – I can’t wait to see where this whole hand transplant thing is headed, because I love it. Meanwhile, #5 is bonding, too. With Tyler. And she comes round to deciding she’ll help him raise the money for the surgery he needs.
Late in the night, Chanel #1 is on duty at the nursing station. Power goes out. Screams. The Red Devil Killer shows up! He lifts his axe, and then removes his mask: it’s Dickie Dollar Scholar, Chad Radwell (Glen Powell), bitch. Who else?
Now that’s an interesting return. His buddy Randall can’t stop screaming, so there he is to get a bit of help. As well as discover that Dr. Holt and Chanel may be “boning.” This scene is god damn hilarious. When Brock keeps clicking the pen, showing off Randall’s exaggerated reactions. In between we find out that Chad’s started a band: “Gold–plated Nutsack.”

Zayday’s digging. Plus, Chamberlain went and got some of the microfiche for her to help, along with a machine setup downstairs. They come across the Halloween Massacre at the hospital. We zip back to 1986 with Dr. Mike (Jerry O’Connell) and a bunch of partygoers, other doctors, all rock out. When a couple of them head to take a few shots alone, they encounter the Green Meanie Killer who promptly chops them to bits. He then pulls a Michael Myers on Dr. Mike, lifting him off his feet impaled before chasing down his next victim to Tiffany’s “I Think We’re Alone Now” and tossing a machete through her midsection. Wickedly nasty sequence. Dig that.
Ingrid Hoffel (Kirstie Alley) asks suspicious questions about whether Zayday might let her know where the Chanels are at all times. She makes a case, but seems pretty sketchy. I wonder what her deal is, I hope she’s got an interesting story.
In the showers, Chad tries to stand his ground against Dr. Holt. They argue over the “dateable guy checklist” and who’s most fit to be dating Chanel #1.  This scene gets more homoerotic by the second, as Chad gradually works his way further and further until literally being tip-to-tip with Brock in the shower stall. I laugh way too hard at Chad Radwell. He’s the ultimate douche and he’s written as such. Powell plays the role incredibly well.
With #1 and #3 convincing #5 that Tyler won’t like her anymore if he gets the surgery, #5 is quite on edge. She kicks the shit out of two dudes who make fun of Tyler in a diner before screaming: “I do not have teeth in my vagina.” Another role played way too funny, written wonderfully, is Chanel #5. Breslin is magic. 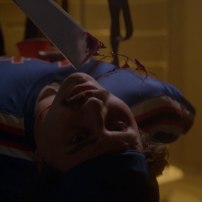 Munsch says she could “really use a friend” and so with Chamberlain and Zayday at her door, they agree to listen to her secrets. She tells them about having awful headaches, bad joint pain, a ton of various symptoms. So it looks like Cathy may be straight up this time around. Although there’s no telling if she’s even being truthful. You know how underhanded she can get. Oh, and a lurking figure outside – is it #1? Or is that Ms. Hoffel? – hears all. A little later in the dark corridors, Munsch winds up confronted with the latest Green Meanie Killer. Luckily she has some ass kicking experience. Fighting hard she downs him. When Dr. Cascade and #3 come across Munsch, this distracts her, and the killer gets away. In a meta moment, Curtis goes off on those moments when somebody kicks the killer’s ass and nearly unmasks him but gets distracted. Fucking awesome! This episode is full of fun writing.
Still, Drs. Cascade and Holt are trying to cure Randall of his screaming. In an aside, Brock’s hand acts up again, scrawling a note; that only Chad cares to read. Funny enough it seems to be a grocery list for a fancy dinner. Hmm. Afterwards playing squash, things get tense between Chad and Brock, though the latter asserts his dominance, as well as possibly a homicidal streak? We’ll see.
You know Denise Hemphill (Niecy Nash) is kicking around, apparently an FBI trainee at this point. She calls Zayday a “stone cold hoe” and believes it’s likely her killing people. Even though she already barked up that tree last season to no avail. But Nash is outrageously funny and I love every time she’s allowed to let loose.

And the moment we’ve all been waiting for – or at least I have – the return of Hester Ulrich (Lea Michele). They’ve got her in a Hannibal Lecter-like cell, even talking like Hopkins a bit and there’s plenty of homage dialogue, the dungeon cell area highly reminiscent of The Silence of the Lambs – a patient even throws… birthday cake mix… at Chanel #1. So the crazy Hester locked away has demands for helping with their case. One of which includes transferring to Munsch’s hospital. “Bitch, ain‘t nobody got time fo‘ dat,” Denise tells her. But I’m guessing they’ll be enlisting Hester soon enough.
So we get a good dose of story about the hand Holt has now. The guy was a world class squash player, finding people to play with and then killing them. That menu Brock wrote down is the last meal he had before going to jail. The guy was executed, a notorious serial killer, and gave up his organs for donation. Chad brings this newfound information to Dr. Holt and they have a bit of a face-off. We also see another tiny slice of that possible crazy person inside Brock.
Munsch talks of going to Papua New Guinea, which Zayday believes led to her having a disease cannibals get from eating human flesh. There’s nothing they can do: less than a year to live. Yikes. We further discover Ms. Hoffel has a bug planted in Munsch’s office, and she knows everything. 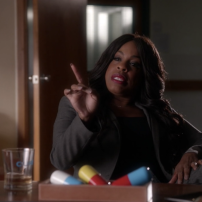 Seems as if Tyler’s been trying to help #5, finding information on the Green Meanie Killer. And then all of a sudden, his surgery is switched, someone wheels him off. Problem is that Drs. Cascade and Holt are gone home to have a “Handsome Contest.” With Tyler on the table, the Green Meanie puts an end to his prying. Tyler gets the laser all right. The Chanels are too late to stop his untimely death.

Loved this episode! Maybe one of my favourites of the entire series, honestly.
Excited for more. Next up is “Handidates” and I can only imagine what we’ll see judging by the title.