With Lee’s (Adina Porter) little girl disappeared, nothing in that house is going well. In the talking head interviews, the real Lee tells us about the horrifying feeling involved with a lost child, as if it’s not hard to tell just from the tears running out of her. The dramatic reenactment shows us Lee (Angela Bassett), Matt (Cuba Gooding Jr.), and Shelby (Sarah Paulson) dealing with the aftermath. Not easy. The local police aren’t too keen about helping, though they do. But that house is getting a bad reputation, as well as those living in it. Either way, Lee does her best to help with the search, along with Matt and Shelby.
Then they come across the doll Lee’s daughter Flora had, torn to bits on the ground, with a circle of blood and pig’s head to go with it. Oh, the macabre finds in those terrible woods! Naturally they’re all terrified. A ways off they find a “skeleton of a farm” where there’s more strangeness. Such as the other portions of the doll, and a pig. When the trio go inside there’s only squalor with every turn of the head. Nobody home, either.
Out in the barn, though, they find something odd and sickly. Two mentally feeble young kids left sucking on a pig’s nipples, feeding. One of the most disturbing images yet.

So now the police believe there’s a bit of horror really going on. Finally. The two boys from the barn are useless for help. They only scream: “Croatoan!” The real Matt (André Holland) explains they now, in the present day, understand what they didn’t at the time – this was a warning. Other than that the search goes on, even if Lee and her ex-husband Mason (Charles Malik Whitfield) are losing hope, plus at odds. He is not buying what’s going on, believing it a power play on Lee’s part, a kidnapping to regain custody somehow. For her part, Shelby tries defending her sister-in-law. Matt mostly keeps quiet, not wanting to get too involved until Mason near punches his ex-wife to the ground. The real Shelby (Lily Rabe) points out the obvious: “We were all on edge.”
In the night, Matt gets a call about a body. Is it Flora’s, or no?
Certainly not. It’s her father, Mason – strapped to a symbolic wheel and burned to a crispy bit of charcoal. Holy fuck. That’s rough. Well, what’s troubling is that last night the cameras picked up Lee heading out for several hours at quite a suspicious time. Now Shelby wonders about her sister-in-law. Matt believes something is urging them to leave, and they ought to listen. Just then a stranger turns up: Cricket Marlowe (Leslie Jordan). He claims to have been called there to help find Lee’s girl. A psychic who’s often helped the FBI in tough cases. When Shelby checks him out, he appears legitimate. Then he can hear something, guessing correctly about Flora hiding in the upstairs crawlspace. He also finds a bonnet and knows about Priscilla: “She died in the late 1500s.” You know what this leads to, a good ole fashioned seance.
Cricket gets a typical seance happening, dripping some blood into a candle, all that stuff, y’know. He calls out to Priscilla, but instead gets the response of a “horrible woman.” She speaks to him and reveals herself as The Butcher (Kathy Bates). Cricket tries to ward her off. She then splits a candle in two in front of everybody making believers out of them. “I shall stack the bodies high as cord wood,” The Butcher claims. She tells them they are but trespassers. Screaming out “CROATOAN“, Cricket sends the spirit fleeing – the same word those deformed boys screamed, the same spell Violet tried using unsuccessfully in Murder House.

Except now Cricket is asking for $25K to track down Flora. So Matt doesn’t want to deal with his bullshit con artist tricks. Cricket’s telling the truth, but sadly this is not the time for greed. Game changes once Lee has enough, pulling a gun to get her answers. Matt talks her down before tossing the psychic out. Before leaving he whispers something to Lee quietly: “Emily says hello. She wonders why you quit looking for her all those years ago.” Hmm, the first daughter of Lee. Secrets. The real Lee explains about having a daughter at seventeen. When Emily was four, Lee went into a store only to come back and find her daughter gone; never to be seen again. Turns out that Lee later sprung for the $25K to pay Cricket.
We learn more about The Butcher from Cricket. Her “Christian name” was Thomason White – wife to governor of Roanoke, The Lost Colony. She was in charge until her husband came home from a journey. Things were getting scarce, people around her worried. Of course Lee doesn’t care about any of that, but Cricket advises not all the public’s been told about Roanoke is true. Seems that back in Thomason’s day she was overtaken. Even her own son Ambrose (Wes Bentley) is forced to turn his back on her. They left her in the forest by herself as they travelled inward somewhere better. There, a strange woman (Lady Gaga) saves her, killing a wild pig that tries to kill her, before feeding Thomason a beating heart and asking for her soul.
And thus began the revenge of Thomas White, The Butcher. She tracked down the men who left her to die, chopping them down one by one. Ambrose is the last left, whom she asks to “beg for a reprieve.” It’s only the fact he is her son that saves him; this time. Where does this get us? Cricket tells that the colony then moved inland, right to where the big house stands today. Dun-dun-DUNNNN!

Out amongst the darkness Cricket calls out to Priscilla, only finding The Butcher and her people. She entertains Cricket’s questions about Flora. A moment later, Lee even says they’ll burn the house down as long as they get her daughter back.
But out of nowhere, Matt disappears. In present day he says he can’t remember ever leaving. When Shelby finds him he’s in the trees having sex with that strange woman who visited The Butcher, animal skull on her head, and two hillbillies watching, masturbating. Good LORD! Present day Shelby looks appropriately torn up.
When Matt shows up he has no clue about what Shelby saw. She’s obviously going crazy, and he’s clueless. No time to worry about that, though. Lee’s being hauled off by the police, and Matt believes it was Shelby, which it was likely. Oh, this is about to get very, very paranoid from here on in. 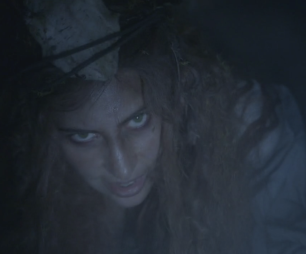 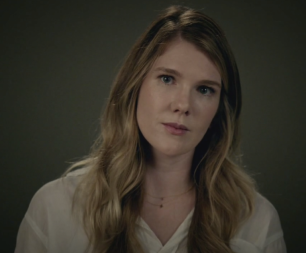 Another stunningly creepy episode for this season. Loving My Roanoke Nightmare, plenty of eerie, juicy, wild, weird stuff going down!
Excited for “Chapter 4” and whatever it brings.