Director Joseph Ruben did the cult flick Dreamscape, going on later to direct Sleeping with the Enemy and an underrated creepy kid horror starring Macaulay Culkin and Elijah Wood, The Good Son. But in between he did his most chilling bit of work: 1987’s The Stepfather.

Many people now know Terry O’Quinn as the philosophically named Lost character John Locke; a role he owned. For me, the fascination with his work started at this film. His performance as bad stepdad Jerry Blake is like the ultimate epitome of your worst nightmare. He’s the worst possible dude your mom could bring home after she gets back on the dating scene. And with a few flaws, the movie gets its boost from O’Quinn going wide off the rails in the best kind of way.

The Stepfather does its brief flashes of horror right, always staying psychological and occasionally venturing into the visceral. Using O’Quinn and his manic abilities, along with Jill Schoelen (later starred in the surprisingly great 1993 sequel to When A Stranger Calls) whose performance as the stepdaughter is equally as powerful, Ruben crafts one of the scarier movies of the late ’80s. You’ll see this on a few lists here and there, although overall people don’t give it the credit deserved.

We open on a sinister scene, immediately preying on the concept of the family unit. O’Quinn’s calm, blood-covered face quickly demolishes the sanctity of the family and the home, as we’re introduced to his suburban killer chameleon act. In between him washing up and leaving is a deliberate, measured shot of the family photos along the stairway wall. Right there amidst the chaos. On his way out, the carnage, blood, the terror are all shocking, including a dead little child right by the door – almost near enough to have gotten away. Truly one of the most unhinged openers to a horror I’ve ever seen.

Part of the great writing is that, with this vicious scene to start the film there’s an elimination of all clueless-ness: we know the killer, we’ve seen what he does and now we know where he’s headed. All this is telegraphed. So what I dig about the screenplay most is that the writing then has to create all the suspense and every bit of tension with Jerry Blake moving on to another family. That suspense comes from waiting it out – when will Jerry snap? Will he? You know he will, and that’s why it’s so delightfully awful.
And why’s the writing good? Donald E. Westlake, that’s why! He’s a classic writer that not enough people talk about. Having written iconic novels such as The Hunter which was adapted into the ’67 Point Blank with Lee Marvin, and The Jugger, a novel Jean-Luc Godard ripped off loosely (and shamelessly until sued) with Made in U.S.A. Westlake really attacks the American Dream of a happy little family by showing how the search for just that can drive some to terrible things, way past insanity. The original screenplay had flashbacks explaining the homicidal tendencies of Jerry, though I’m glad these were removed. Not enough room for that, and it spoils the intrigue of Jerry’s craziness. Without explanation he’s left as a monstrous psychopath, whose madness remains well concealed for so long until it can no longer keep hidden. Makes for a much scarier character.

Westlake loosely based Jerry Blake on real life multiple murderer John List – he killed his mother, along with his wife and three children, before disappearing. He was a fugitive nearly two decades, assuming a whole other identity and life, even remarrying. The writing brings this real life character into fiction, but does not make him cartoonish or inflate him too much. Between the writing and acting, Jerry is all too real.

The whole film plays on a fear of not only someone replacing the father, it also takes everything up a notch by making the man replacing Stephanie’s (Schoelen) father an actual threat; a maniacal and relentless serial killer moving from one family to the next. A lot of young people hate their stepparents simply for the fact they’re not a real parent. But Westlake’s script makes Jerry the true terror of a teenager not wanting their mom to date again. Jerry represents the idea of starting over and beginning a new life after losing a family. Except Jerry brings on the necessity of having to start over by murdering those he pretends to love once the family disintegrates. It’s like a reversal of the evil stepmother trope too often employed in movies across all genres. Except Jerry is the evil stepfather, holding an entirely different motive than the archetypal bad stepmom – he is the man who wants a loving, perfect family so bad that he’ll kill for it. He shapeshifts from one family to another to accomplish this goal. As Jerry says himself: “The only reality is this moment.”

A perfect scene works for this concept: Jerry and the family put up a bird house, a picturesque little home like that of the American Dream. Up high on a pole, this is a symbol of Jerry’s inability to ever reach that perfect American Dream. It will always remain slightly out of his reach. The entire movie is one big allegory about suburban America, how it’s saccharine sweet and lovable on the outside, even with turmoil underneath boiling, and at the core many times it’s hideous and putrid.

There aren’t many instances of violence. However, the ones we get are downright brutal. For instance, Stephanie’s doctor is dispatched with absolute barbarity when Jerry beats him to death with a two-by-four piece of lumber; apparently audiences in ’87 felt this was almost too much, giving many nightmares. The psychological horror is never far from reach, like the scene where Stephanie witnesses Jerry, taking a break from their backyard BBQ, have a meltdown in private. This moment is just crazily unsettling, every time. The intense finale is suspenseful and excitingly paced, a nice horror-thriller finish. Some shots of Jerry stalking Stephanie through the halls of the house are reminiscent of Jack Torrance as he shambles slowly towards his son in that snowy hedge maze. 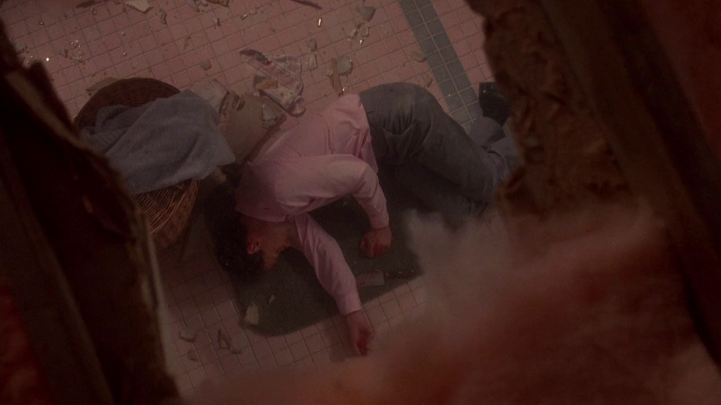 The whole movie has great camerawork, from the opening scene giving us gradual peeks at the horror of Jerry’s M.O. to the finale with its fast and thrilling feel. One big complaint: the score. It is a terrible instance of ’80s music. Never fun, like other movies from the era with similar music. A couple brief moments work fine; those are few and far between.

Overall, this is a classic horror. The Stepfather touches a sensitive nerve, particularly in America where the focus on family in entertainment, whether in film or on television, has been strong since the invention of the moving picture. Jerry’s violation of the sacred familial unit, purposefully, is terrifying to anybody. Like putting the archetypal stepfather up there with the shark from Jaws, making him a symbol of dread which strikes at the heart of family values.

Don’t miss this one. Never underestimate Terry O’Quinn and his capability to creep people out. He is a great actor, his presence here lifts the material up. Regardless, it works and is a favourite of mine from the 1980s.