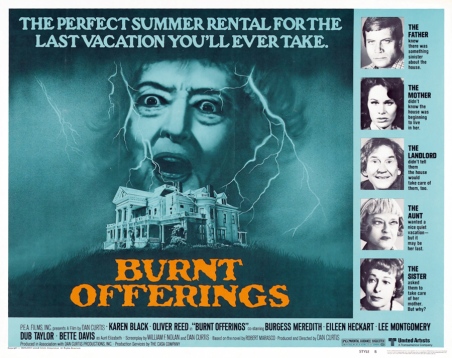 There are certain spectacularly enjoyable haunted house movies in horror which are unforgettable. A few of those, everyone knows. Some are a little less touted by the general horror fans. One of those on top of my list is Burnt Offerings, a 1976 haunted house chiller from Dan Curtis (of Dark Shadows fame) starring powerhouses Oliver Reed and Karen Black, featuring smaller roles played by the legendary likes of Burgess Meredith and Bette Davis.
Curtis directs this sub-genre piece with finesse, but it’s mostly his writing, along with William F. Nolan, that catches the viewer. One of the two novels Robert Marasco wrote serves as material for this adaptation. Curtis and Nolan make the drama of the family within the haunted house just as interesting as the eeriness of the structure itself. Better yet, Black and Reed perform their asses off as the married couple dealing with an unexplained haunting.
Burnt Offerings combines good drama with better performances. Better still, the haunting of the house is a little different than other similarly styled plots. Whereas other movies focus on ghosts, Curtis’ film uses the house as the ghost, the monster, the creature. And the Gothic-ness of this story makes it feel like a story out of Edgar Allan Poe, like something you’d find filed away in a dusty old tome on a library shelf.

An element of the frights come out of the fact this is the first film to be shot in the Dunsmuir House and Gardens located in Oakland, California. Three years later, Don Coscarelli’s Phantasm was also partly filmed there, played the part of funeral home. The house’s Neoclassical-Revival architecture makes for a great place out of time feeling to Burnt Offerings and is naturally conducive to being the primary location for a haunted house picture. On top of the location – which Curtis claims was the single location for the entire film, no sets built or used – the music from Bob Cobert (Dark Shadows, House of Dark Shadows, & other Curtis works) is relentlessly foreboding. A perfectly classical and creepy addition that does wonders for the atmosphere. Alongside the score is the cinematography of Jacques R. Marquette, who shot Roger Corman’s 1959 A Bucket of Blood. Seeing this mysterious horror film through Marquette’s lens is like a foggy dream, a weirdly compelling nightmare on a hot evening. There’s so much mood to just the look itself that even without the score everything looks ghoulish and properly ghostly.
Apart from the look and atmosphere, Burgess Meredith and Eileen Heckart really take the viewer into the haunted house’s sinister feel, playing Arnold and Roz Allardyce, owners of the house, like two apparitions more than people. They’re the first inclination of something not being quite right in the old place. They don’t feel scary, they simply act as the gatekeepers of the house, the film, and all of the macabre delights in them both.
Some of my favourite, most atmospheric moments in the film are the visions Ben Rolf (Reed) has of a chauffeur he remembers at the funeral of his mother when he was a boy – a vicious nightmare, the black-and-white dream feels real, vivid. This also pushes Ben towards something evil in the house, the start of his real troubles. Seeing the chauffeur turn up time and time again, the car rolling up the driveway, drives Ben almost completely mad. The smiling look of the chauffeur is etched on my mind; the black clothes and glasses, the pale complexion, his creeping smile. These are a few of the greatest bits in the entire movie. 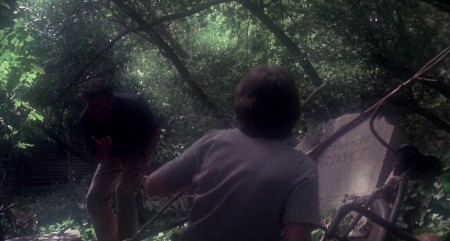 Reed was a fascinating actor, if not a real asshole. But still, his talents were amazing. Ben Rolf is a great character for him to have tackled. Perhaps never more evident, the pool scene exemplifies why Reed is so versatile. He can act even the most nasty scenes with an air of subtlety which makes things intriguing. In the pool as he torments his son, the evil of the house taking hold, these are chilly moments acted with smug, sinister zest out of Reed; the way he cradles his bloody nose before slinking back into a swim is another scene from the film I can never, ever forget. And you can’t ignore Black, either. Especially later on when Ben discovers his wife upstairs, she is downright stunning and the look on her face alone is worth the price of admission. A lot of actresses might’ve played the part differently yet Black brings class and emotion to the role, as well as giving all the horror and ghostly business her whole heart. She and Reed are beyond wonderful. Not to mention those extra additions of Meredith, Heckart, and the always lovely to see Bette Davis. Really can’t beat that cast in ’76. 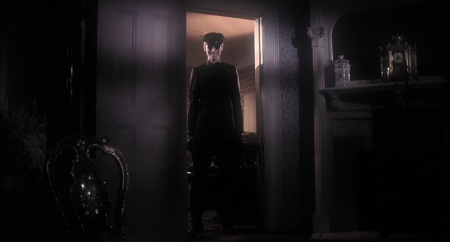 Burnt Offerings is on my top ten list of haunted house horror. I remember seeing it for the first time about a decade ago when searching out underrated classics. Certainly, this is one of those that needs to be more well known, not only amongst genre fans but those on the outside, too. While the movie is filled to the brim with creepiness – “Ah yes, children are good for the place” – it also doubles as one of those horror flicks you can show to people who aren’t huge on horror, maybe around Halloween when they’re in the mood to find a few frights and spooky moments as fall begins spreading everywhere and the leaves are tumbling down.
Pick out a nice, dark night this October. Find a copy of this movie, and you’ll discover some unexpected horror joy. Trust me. And at the very least, Reed, Black, and the rest of the cast will keep you entertained the entire time. So dig in.