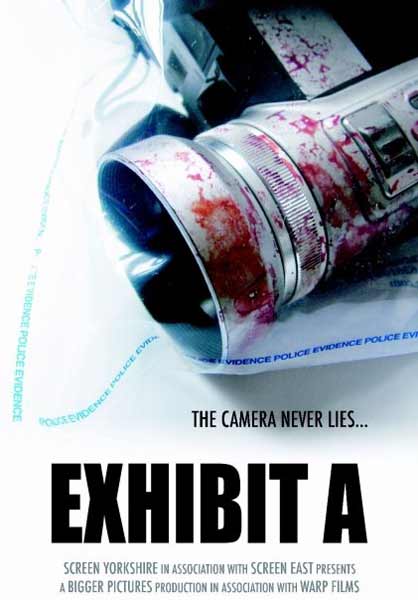 The found footage sub-genre is filled with movies which range from awful to great. I’d likely say found footage has a bigger ratio of bad to good than most other sub-genres out there. Depending on the premise, a movie using this style can really grab you. Too many try emulating the most popular offerings, such as Cannibal Holocaust and The Blair Witch Project (as well as Paranormal Activity in the post-2000 landscape), rather than forge new ground on their own.
Exhibit A is a fascinatingly horrific look at the regular lives of a British family, whose patriarch is hiding a secret; one that proves to be devastating. Like a socioeconomic found footage movie. Instead of looking for ghosts in the woods or having a group of people filming while running away from an unknown force/serial killer/something else, this little flick, with chilling focus, peers into a normal world that may even hit uncomfortably close to home for some viewers.
Because of the plot’s humanity, director Dom Rotheroe (My Brother Tom) is able to tap into an element of us all, touching deeply on fears many feel – of rejection by our own family, of failing those we love; the fear a father may have of not being able to provide properly for his family, as well as what that does to his imagine in the eyes of his wife, his children, his friends. Within the normality of these peoples lives, Exhibit A manages to burrow under the viewer’s skin, scene by scene, until arriving at the shattering and shocking finale.

One of the major reasons I love this film is how it really plays up to the sub-genre of found footage. There’s lots of found footage teetering along the edge, playing with the conventions (or merely forgetting them a moment), which still ends up being excellent. What Rotheroe does is keep things consistent, as we view the entire film through the lens of the family’s daughter, Judith King (Brittany Ashworth). In fact, the immediate first scene shows us an official-looking stamp and print from the Yorkshire Police. This lays out the plot as actual evidence from a crime scene at the King family home. There are no opening credits. The title comes directly from the police report as Exhibit A, which is what you’d normally see when a tape is viewed in court. All of this helps work towards a genuine effort of found footage, pulling us into a natural atmosphere, as if it’s all real, actual people, instead of a contrived film’s story. From there, we witness all sorts of moments through Judith’s eyes, or that of the camera’s more specifically. This encompasses her own private moments, such as the burgeoning crisis of her sexual orientation, and then casts an eye on the private moments of Judith’s father Andy (Bradley Cole), as she tapes him secretly when he goes out to the shed by himself, when he’s confronted by an angry man from the office in which he works, and so on. Instead of wondering why the camera is always filming in this slice of found footage, there’s a perfect reason at all times, and as opposed to a lot of found footage already out there this is a welcomed addition to everything else enjoyable.

The biggest and most effective portion is how well both Cole and Ashworth play their characters. If it weren’t for the performances this could easily have become a dragging endurance test of boring scenes. The entire cast are fairly believable in their roles, but it’s these two who shine most. Ashworth is great because she has a difficult character to play, a young woman growing up in a family with hidden problems and at the same time trying to figure out herself sexually. The character Judith’s development is expertly presented through the images her camera captures – for instance, she stalks (too harsh a word but the only good description I can think of now) a girl next door by watching her through the video camera, and when confronted with her face to face Judith all but freezes completely. Later, the fact she is likely lesbian becomes a larger, more significant family event, although I’m not going to ruin that for you.
But this leads to Cole’s performance as the King family father, Andy. Truthfully, this may be at the top of the list of great performances in the sub-genre. All too often we’re treated to the same screaming, bickering, shaky cam (et cetera) and the performances are only mediocre (if we’re lucky). Cole transforms into a wildly charming yet secretive family man, his energy with his kids and his wife is evident from the get go. Gradually as the film progresses we start to see behind the mask, and Cole is the gatekeeper to let us in. He starts becoming more and more strange, both to the viewer and his family (especially daughter Judith). When the last 15-20 minutes come around, Andy King turns into a monster of epic proportions. It’s the way in which Cole as an actor draws us towards the semi-delusional state of living that Andy falls into throughout the course of the plot, making you feel for him even if he’s a liar and imagining how tough it must be for him to accept what’s happened in his life. The final moments are nerve wracking, in large part because of Cole’s emotional acting; you still feel for him, but the finale’s events erase any sympathy for his situation, as he brutally wipes out any chance of that.

Cole as Andy King is one of the best performances in any found footage film I’ve seen. His convincing portrayal of a man losing a grip on his family and his entire life, his career, is both sad and incredibly grim. One scene particularly, involving a party in his backyard, pushes you to the limit of being uncomfortable, as he dances around like an idiot, trying his hardest to be NORMAL and yet falling far outside of any pattern of normality. This is the turning point. After this, Exhibit A dives headlong into the morbid thrills of watching a family self-destruct at the hands of dear ole dad.
There are a number of intense scenes, ranging from well-meaning father behaviour to the desperate clinging of a man trying to make sure he never loses his family. So many scenes are perfectly played to make you feel the maximum amount of ruination. Ultimately, the position of trusted parent is at the middle of the violent cyclone and we’re privy to an examination of how Andy violated that position.
Exhibit A is a cracking film, one of the greater efforts in found footage since The Blair Witch Project. The acting, even how it’s shot (most camerawork was literally done by the cast), is near perfect. Ashworth and Cole as the daughter and father respectively are fascinating to watch; they lead us down the garden path into terror. The finale is completely unsettling because of how far we watch Cole’s character fall, comparing the end to the beginning is like watching two entirely different men. I suggest if you’re looking for a found footage movie to wow you, or at the very least step outside of the typical format and plot we see on the regular, this is one you have to check out. But I warn you: the end is disturbing, and those sensitive to family issues might actually find it tough to watch. Yet I urge you, watch. This is a gem if there ever were one.