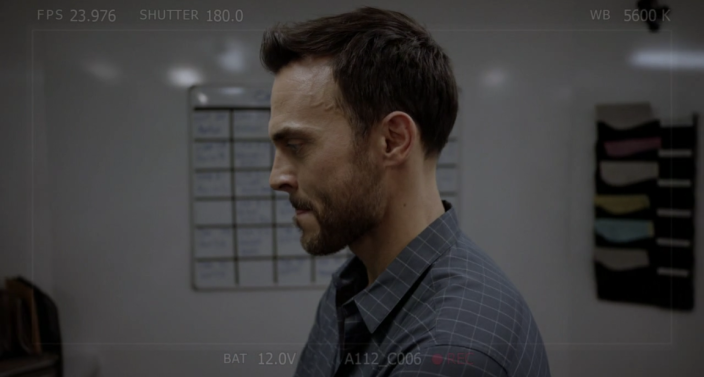 Return to Roanoke: 3 Days in Hell is well underway. Sidney James (Cheyenne Jackson) cheers behind the scenes watching footage like the greasy douche he is, and loving every minute of the drama. Of course nobody knows where Diana went – a.k.a dead. Not that Sidney gives a shit. The cameraman notices Rory Monahan (Evan Peters) getting stabbed, but can’t get his camera ready in time to catch anything. Then comes a scream in the night from their PA. In the dark we hear her choking, Sidney beckons the cameraman. They find the PA with her throat cut. And then Agnes Mary Winstead (Kathy Bates) in The Butcher’s clothing emerges, stabbing Sidney, as well as hacks the cameraman to unseen bits. She proclaims to the fallen camera: “I am the tree and the lightning that strikes it.”

Audrey Tindall (Sarah Paulson) and the others try finding Rory. Matt Miller (André Holland) keeps telling them that “R is for Rory.” You know nobody wants to hear that. Either way, he and Shelby (Lily Rabe), along with Audrey, Lee Harris (Adina Porter), Monet Tumuslime (Angela Bassett), and Dominic Banks (Cuba Gooding Jr.) all go searching the house for clues. They find a pool of blood upstairs. Audrey convinces everybody that Rory got that part and Sidney convinced him to do them a frighten in order to get their blood pumping. The poor wife is left believing her younger husband took off on her for better things. That’s sad.
Down in that cellar Agnes raves by firelight to a camera. She’s separated completely from reality now, don’t think she’s coming back ever again. Thomas White has taken over Agnes, full stop. She slips in and out of persona, yes, but ultimately The Butcher is becoming her primary personality. To devastating effect. “‘Cause the fans wanted more. And they wanted The Butcher.” However, things get spooky for even Agnes, as the ghosts of Roanoke’s Lost Colony start appearing around her, their wooden symbols hanging from the cellar’s low ceiling.
At the house nothing is getting any easier. Dominic edges up on Shelby, right as Matt appears out of nowhere: “Fuck her right here for all I care,” Matt tells them both defiantly. During an aside confessional, Dominic shows us that Sidney’s given him a body cam in the form of jewellery, to make things difficult for anybody and everybody. What’s better than screen time?
Shelby has a run in with Agnes in the bedroom. The old woman rages, going from The Butcher back to herself, and back again. A legitimately creepy moment. Agnes slices a piece out of Shelby, although Dominic takes her down before she can finish the poor woman off. All the while the cameras are everywhere, constantly rolling and catching the terror. Yet off into nowhere disappears Agnes. 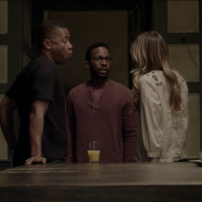 Everyone’s becoming desperate. Nobody is coming to help, certainly, and we know why. They don’t know, though. For the time being they try and devise a plan how to get help, or simply get out of there. So several of the group head down into the tunnels below the house, where Edward Mott once supposedly led the Millers. Only they come across a screaming ghost, one that Lee’s gun can’t seem to take down. They rush out into the daylight, no longer fearing Agnes, wherever she’s hiding. Inside the Millers lament their lost marriage: “This place took something from me,” Matt confesses.
In the sky rises the Blood Moon. Lee, Monet, and Audrey finally stumble across the trailer, along with the gutted corpses of the crew and Sidney. No phones, no way to get out even in the car which is dead; you know it is! Then Agnes comes running at them from the woods. Lee shoots her into the dirt luckily, and the three women try to move on. Except torches in the woods alert them to ghosts of the Lost Colony. The Bloody Moon has begat spirits in flesh and blood. Meanwhile, as Audrey gives a Blair Witch Project-style confession to her phone’s camera, blood drips from overhead: from her dead husband. The ghosts still come for them sending the woman running into the darkness.
Or are they ghosts? No, it looks like humans in the night this time.
Oh, and Agnes, she’s survived a bullet in the chest, doing a little homemade surgery. You know that bad bitch isn’t going down. Perhaps it’s just more of the Blood Moon’s dark magic. 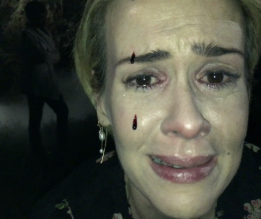 Poor Matt and Shelby never should’ve agreed to go back to that place. In the middle of the night Matt takes a walk downstairs. As if on a mission. Against his best interest, Dominic follows along with that sneaky body cam. He sees Matt in the basement where the Witch stands in the shadows: “I‘ve been waiting for you,” says Matt. Right before she grabs him violently, pulling him out of sight in a flurry of fierce noises. Dominic goes to get Shelby, they head back down together. They find the Witch on top of Matt. When Shelby pulls her off Matt tells them he came back for her. This prompts Shelby to smash his head in with a hammer until it’s nothing but mush. Wow.
The hillbillies have got hold of Lee. Tied up, she’s at their mercy. Uh oh. These are the real hillbillies, not the reenactment crowd. They’re the real and nasty deal. The Polk family; living off blood and the land. Mama (Robin Weigert) has her boys get to work on Lee, starting with some thigh flesh. They grease her up, season her. Y’know, that good stuff for “tenderising.” Likewise they’re torturing Audrey and Monet a bit mentally. Surely they’ll be seasoned soon enough. First though, they’re force fed a bit of Lee.
Up at the house Agnes is preparing the place for burning. Behind her rally the ghosts of the Lost Colony. Nice note: a parallel shot of the real Shelby with the fake Matt matches one previously of the fake Matt and fake Shelby from those reenactments, as they watch the torches from the window. Problem now is for Agnes – the real Butcher has arrived, and she isn’t sharing places. Agnes begs that she “only wanted to be on TV.” Not good enough. You’re fucking axed in the face, Kathy!

What a solid episode. This really turned things up a gory notch. With that excellent 6th episode the plot twisted, and after that the series did itself a favour by coming out with this blood soaked “Chapter 7” that explodes across the screen. We can only wonder what will happen next. I dig that they’ve shortened the season, too. Not that they couldn’t have stretched it more to 13 again, just that they’ve set themselves a decent round number of episodes, they halved the plot in a sense, and now we’re heading into the homestretch, where anything at all can happen.