There are few slasher pictures which give me as much joy as 1981’s My Bloody Valentine. Many non-genre lovers will write this off as just another hack-and-slash serial killer romp, when it is, but it has so much more to offer than only being a toss away horror. In an era when horror was alive, kicking like nobody’s business, this George Mihalka-directed film is one of the greatest. That’s saying something.
This is easily Mihalka’s best work, having mostly dabbled in TV – from movies to series work. I’m not sure why he didn’t stick with the genre, honestly. Maybe this wasn’t as big a hit as expected. Certainly it’s gone on to cult status, with even the likes of Quentin Tarantino raving about it being his favourite of the slasher movies. Regardless, Mihalka does a fine job directing and he’s a big part of why it succeeds.
Having not seen My Bloody Valentine for about 5 years, I almost forgot how vicious it is as a slasher. I remembered loving it, yet throwing it on again recently I found myself pleasantly shocked by some of the death scenes. Better than any of the gory, messy havoc the killer wreaks is the chilling suspense that relentlessly pulls us into the story, only to have us watch victim after victim fall heartlessly (pun intended) to a terrifying menace.

Always have to do a good opener, and boy, this is a god damn knockout. With the female miner murdered down below ground we get an upsetting and gruesome kill to start off on, as well as the fact it contains such on the nose imagery with the heart tattoo over the woman’s heart, which is then pierced by the mining pick. You’d think this might play as cheesy, instead it’s appropriately nasty. Immediately, the title of the film is more than relevant. It joins the big seasonal horror names, standing alongside the greats like Black Christmas, Halloween, and the superstitiously named Friday the 13th. Much better than stuff like April Fool’s Day, which is still okay, and definitely leagues ahead of far lesser fare such as New Year’s Evil. Funny enough, screenwriter John Beaird did uncredited work on another slasher from ’81 – Happy Birthday to Me.
But My Bloody Valentine does belong up there with the greatest slashers of all time. The killings and the legend behind the story are chilling. One of those campfire-style tales you’d hear from a Scoutmaster trying to scare his troupe; a genuinely creepy story that would chill an adult as much as any kid. Moreover, apart from other holiday-themed horror, setting this film on Valentine’s Day of all days is a stroke of genius. Big corporations and media have already commercialised the day of Cupid to sickening lengths. Mihalka and the ghost of Harry Warden go further to desecrate a day about love by morphing it into a bloody, brutal horror affair, a day when the killer comes home to take revenge on those who celebrate the day of love. Only perfect and fitting that the colour of the day is bright red.

Some of the greatness is in the cinematography. Unlike too many slashers with poor camerawork, the cinematography from Rodney Gibbons – likely the best of his career – is a standout aspect of the production. Over and over, great POV shots from the killer’s perspective turn up to haunt the viewer as victims are hunted like animal prey. The launderette scene is legitimately scary. Our killer is totally savage, but the mining outfit is unnerving, slick black and that mask; jesus! A few times these POV shots crop up and they benefit the suspense incredibly, giving a lot of scenes that perfect spook factor. So many of the kill scenes, all of them, are impressive, as the killer stalks in the darkest spaces, literally driving the plot underground where the tension raises to near unbearable heights. Once we’re down in the mines the look of the film gets even darker, the Sydney Mines in Nova Scotia providing an amazing feel for those scenes.
Aside from the appearance, filming in the mines was rough for the crew due to methane levels necessitating a measured use of lighting, and also in regards to the logistics of taking equipment (plus cast and crew) down to over 2,000 feet below ground. That’s intense. All worked, though. This Nova Scotia location could never have been replicated on a soundstage.
The best of the film is obviously the kills; always is the case with any proper slasher. Finding Mabel’s bloody, torn up corpse in the dryer of the launderette is one of the most shocking and visceral kills of any slasher flick; ever. The reaction from police chief Newby (Don Francks) is entirely appropriate, a horrified, sickening look from head to toe. Then the sadly ironic death of bartender Happy, setting up a Harry Warden scare, cackling to himself only to have the murderously real Warden pop up to stick a pick through his chin right up into his eyeball. Later, a girl dies in the shower and has the shower head spouting water out of her mouth, a creative and horrific death. The practical effects all around are vivid, scary, and unbelievably accomplished. Part of what sells the horror so well overall. 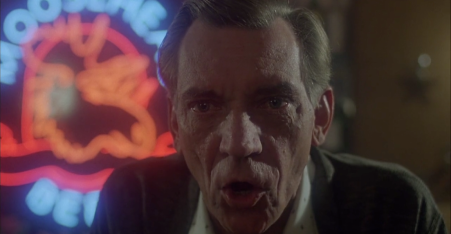 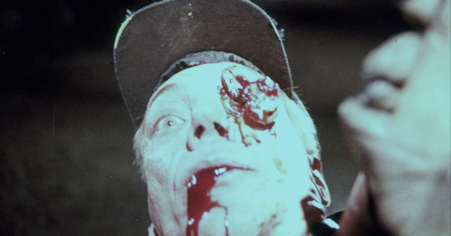 My Bloody Valentine has very few flaws, if any, in terms of the genre. Even a nice score that changes from kill to kill in a unique way, courtesy of Paul Zaza (Prom Night, Curtains), something that’s always welcome in a good horror. Mihalka does a sterling job in the directorial department, shame he didn’t go on to more creepiness.
Certain slashers do best for their atmosphere, letting the kills act as byproducts of the story and character. Some get the atmosphere just right and add in plenty of blood to slick the screen. This one is of the latter category. You can cut the tension with a knife in more than a handful of scenes. And really, if you find yourself lacking the necessary kill count or bloody onscreen then maybe you just want a splatter flick. Because this one brings the goods.
Ever since first seeing it, this film has stuck with me. I dig slashers, I don’t always need them to be truly awesome. Now and then I settle for one only for the fact it has a decent premise at the core; if it goes nowhere, at least maybe a couple gnarly kills can make up for a lack of compelling story. But Mihalka’s work here with the screenplay from John Beaird does wonders for the genre. More people need to see this, and stay away from the shit pile of a remake. This is a slasher that stands the test of time. It has a great look and even better murder. Let’s face it: the death is why we come. Everything else, for better or worse, is secondary.