* For a review of the penultimate episode, “Carnival of Souls” – click here

From what I can tell, the English translation of the Vietnamese title for this episode means “flowing water wears away stone” roughly. An interesting thing to think about in terms of all the water imagery, Mac Conway’s (Logan Marshall-Green) love of swimming, and so on.
We start ten months before the current season’s timeline. The choppers fly overhead of the Vietnamese jungle. Troops are at base camp, relaxed for the moment. Mac and Arthur (Jamie Hector) get a few orders from their platoon captain. Mac watches the river carefully as a boat floats by; always suspicious, never off his guard.

But in his present predicament Mac’s definitely off guard. Detective Tommy Olsen (Josh Randall) has him dead to rights, hoping to get more out of ole Quarry about Cliff’s death. That’s not long for this world; neither the conversation, nor Tommy. He gets his face shot off horrifically, as the carnival grounds around them come alive and bullets ring into the night. It’s Credence Mason (Ólafur Darri Ólafsson), of course. He gets his, too. Then Buddy (Damon Herriman) and Mac are left in a gunfight with some of Mason’s Dixie crew. They’re a pretty handy pair, though.
They make it back in one piece, appeasing The Broker (Peter Mullan), as well as leaving Karl (Edoardo Ballerini) with a new game of Pong to play. Things are looking pretty good for The Broker now, poised to take over the local scene. Only problem is that now Mac has walked himself into something far bigger than just killing bad dudes for money. Again, that’s the call of the wild animal in him, unleashed by the United States Army overseas.
Mac’s dad Lloyd (Skip Sudduth) has him and Joni (Jodi Balfour) over to his place. Seems Lloyd got a cash offer for the house. A small family wants to buy the place, especially excited over the pool. Out of the blue, Joni doesn’t want to sell. Not after her husband put the pool in himself, they made a home for themselves. Things don’t get any better when Lloyd’s wife drops two dirty words on Mac: “war criminal.” She thinks Mac and Joni only want money from them. A truly insulting moment. Moreover, people always assume they know exactly what happened, all because of how the media tells them and frames it for the people back home. They don’t consider how it really was for soldiers, they don’t take in all the factors. In a dirty war like Vietnam that was particularly true.
At least now Mac has the money, paid off by his stepmother to never come back, and he can pay The Broker off. Or is it that simple now? Oh, I don’t know about that. In the meantime, we flashback to Vietnam those ten months ago. Mac, Arthur, and the rest of their platoon wade through water to a spot further inland. They’re headed for Quan Thang, which we already understand is where the massacre went down, the one in which Mac and Arthur were heavily implicated to have done terrible things. Supposedly. 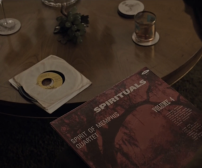 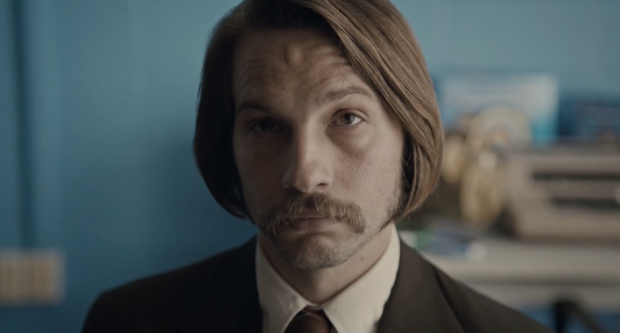 Poor Mac, he’s trying to find himself a job that doesn’t involve killing anybody, or guns in any way. He applies for a job selling pools. Luckily, the guy interviewing him doesn’t really pay attention to the news. I wonder how long it’ll last before discovering who Mac is, or at least who the media implies. He’s got the job, but I can’t help feeling there’s a gut punch coming down the line.
Ruth (Nikki Amuka-Bird) has Moses (Mustafa Shakir) over for dinner. Although she still doesn’t know that’s his name. And she also doesn’t realise why he’s there in the first place. He starts sniffing around after Marcus has been fixing the TV, buying things, suspicious little clues that Moses definitely suspects has to do with Arthur’s missing cash.
When Joni and Mac go out to celebrate the new job, the former soldier has a PTSD episode where he sees that Asian mask standing in the background, staring at him. He interrupts a band playing, terrifying everybody a bit. Outside he falls to the ground nearly weeping: “I‘m sorry,” he repeats, over and over.
So we go back those ten months again. In an abandoned building the soldiers come across that Asian mask hung on a wall, sitting in the dark. Mac stares at it for a while, fixated on the face. Something that’s obviously stuck with him, buried in the recesses of his mind and bubbling to the front in the worst of times.
Finally we see Moses confront Marcus. He asks plainly – “Don‘t fuckin‘ lie to me, son” – where the money’s stashed. He takes the cash, and makes sure to tell the kid he better keep his mouth shut. Moses threatens his family with death. That’s a bad dude. 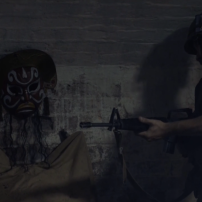 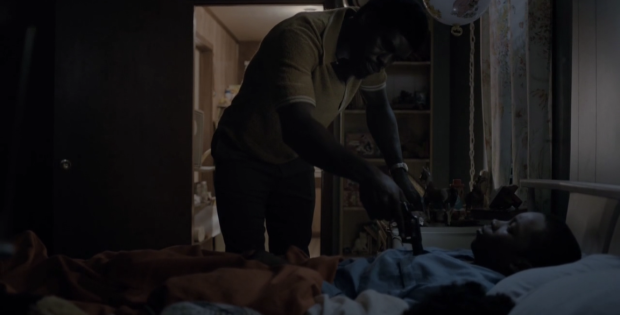 Later on we see Mac at the voting booth, choosing between either Nixon or McGovern. At the same time Joni’s trying to find a doctor to talk with about Mac and his PTSD. Of course back then it wasn’t known as that, or at least not treated with the appropriate respect and gravity deserved. A guy at the VA hospital hands her a pamphlet, as if that’s meant to help. He also implies that seeing as how Mac has “both his arms” and “both his legs” then there’s nothing actually wrong with him. Sickening display of what we’re seeing now as the result of all that neglect. Tons of mental illness, death by murder or suicide or whatever else, too many problems.
Buddy’s having a tough time. Sitting with his mother Naomi (Ann Dowd), he talks about survival, from the time of dinosaurs right to the Black Plague spreading across Europe. He feels like he’s done nothing with his life: “What am I doin‘ with it, mama?”
In ‘Nam, we see Mac and the platoon heading further to their destination. Once there they take all precautions, although Arthur notes there’s a Catholic cross at the front of their village. Either way, the platoon’s captain sends them in making clear to “fire then you ask questions.” Inside the village all hell breaks loose. Civilians are killed. Napalm lights the forest on fire and burns villagers alive. Gunfire gets exchanged between the Americans and some Viet Cong. At one point Mac throws a grenade in a hidden tunnel, where women and children scream. He sees the bloody bits of a child next to him, still moving slightly. This all but melts his brain and his psyche. We can easily see, from this POV, that Mac and Arthur, most of those guys, did not realise what they were doing, led astray by orders followed blindly. Still, they then had to go on living with what they’d done.
At home, Mac goes to meet The Broker. Instead he runs into an old face from the army, someone he isn’t so happy to see – his old captain, Thurston (Matt Nable). They catch up on things, rather contentiously. We get the impression that Thurston hasn’t repented whatsoever, in any shape, for what they did in Vietnam. He seems to want to go back, not able to adjust at all to civilian life anymore. In Thurston, Mac sees everything he hates; about himself. He reminds Mac of what they did in that fishing village. On top of it all we get another flashback to Thurston commanding his officers to execute remaining villagers, under threat of death if they won’t comply. Close by, Mac looks into the distance with heavy sorrow. Well, in the series’ current moments Mac attacks Thurston outside of the bar. They tangle a bit before he takes off after the former captain into the woods. 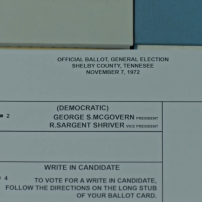 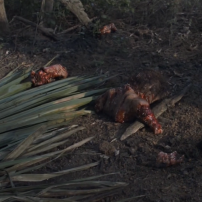 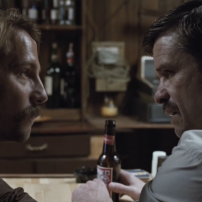 Do you recognise this scene?
It’s the very first one, from the beginning of the season. This is where it all started. We witness Thurston beating Mac, holding him below the water. After he thinks Mac is dead Thurston walks off. Only to take a bullet. And here, we see Mac pump more lead into the man making sure he’s good and dead. He pushes Thurston’s corpse out into the water to float out and far away from him.
In other news, Buddy goes out cruising but ends up getting attacked by a couple men. They viciously beat him, taking his money and leaving him unconscious, or worse.
When Mac finally goes to meet The Broker he’s beaten and fucked up. That whole meeting with Thurston was, naturally, the old fella’s doing. More than that The Broker tries to keep Quarry on for another job. However, our soldier doesn’t want anything to do with him after all they’ve been through together. “Who‘s a fella like you vote for?” Mac asks The Broker. He also says he “wrote someone in” on the ballot: Otis Redding. We discover The Broker hasn’t voted “since Truman.” Kind of fitting. Likewise, we discover Mac misses war. Not hard to tell.
Flashback to the war. Thurston receives a visit from none other than The Broker. He’s walked through Quan Thang. This is where Conway’s name first comes up for the old gentleman. The Broker takes a stroll in through the trees, to where a field is full of the ripe, beautiful plants needed for processing heroin. Ah, and it all comes together. Very interesting political twist on the Quan Thang. 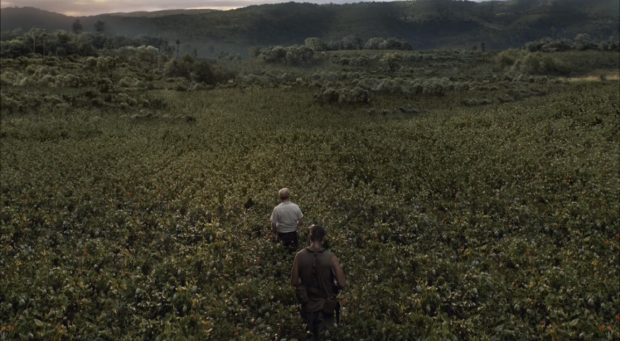 Buddy – or Sebastian, as we find out – makes it home to his mother, beaten into bloody pulp. Detective Verne Ratliff (Happy Anderson) has one last look at Cliff Williams’ book of lyrics. President Nixon is announced to have won on live television. And Ruth, she finds that Moses is no longer waiting for her at the diner, but sitting home with the found money, contemplating his next move.
On the shoreline Mac sits with his next kit – gun, money, name. He got himself out, yet allows himself to be sucked back in. The carnage of war has crept into his veins, important as the blood flowing through them. Meanwhile, The Broker plays him like a fiddle.
Then we see Mac strip down for a swim out into the river, perhaps doing the only thing he can to not think about everything other dark thing swirling around his entire existence. 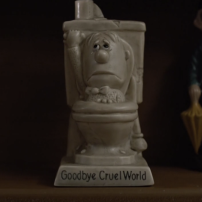 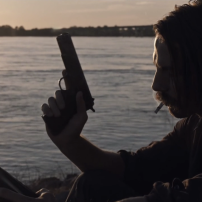 What a beautiful, gritty, importantly relevant series! Man, this first season was a blast. With the finale episode and its flashbacks, the revelations, Quarry cements itself as one of the greats, up there with any of the best HBO has had to offer over the past 20 years. Truly amazing writing, lots of fine acting, as well as solid directing.
Cinemax: do what’s right. Give this show a second, third, fourth season. C’mon. Do not pass this up. There’s a lot of other important stories to tell in the world of Mac Conway.