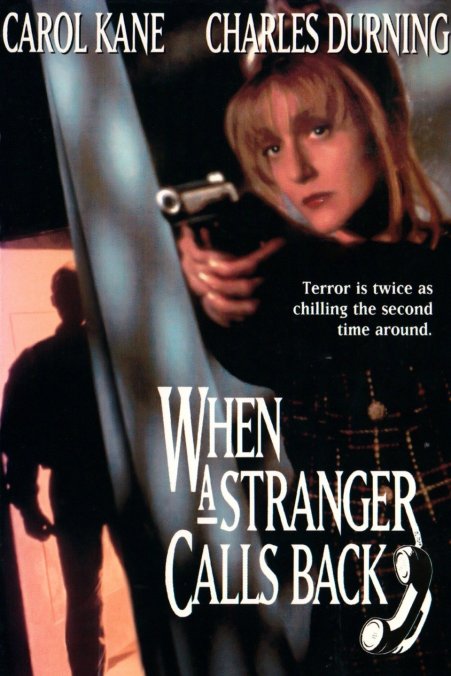 1979’s When A Stranger Calls is a favourite of mine. There are far too many people who either don’t know it, or they don’t appreciate it enough. Tony Beckley’s performance as Curt Duncan, the titular stranger, is the stuff of pure nightmare. And somehow, 14 years later, Fred Walton’s sequel When A Stranger Calls Back nearly hits all the same eerie notes with a different story and some of the same characters.
Walton gets a bit wilder in this sequel, although just about every bit of it works. Charles Durning and Carol Kane return again as John Clifford and Jill Johnson respectively, each hardened and experienced due to their experiences with Duncan in the first film. In the position of Kane’s Jill this time around is Jill Schoelen as Julia Jenz, a woman whose life becomes a horrorshow at the hands of a demented, relentless stalker.
The sequel goes for a more outlandish stalker. His psychosis is much stranger than that of Curt Duncan’s urge to kill. Some might find the stalker’s gimmick cheesy. Me, I find it terrifying.

Mimicking the original, Walton starts off with a suspenseful opening sequence with Julia babysitting. However, he sets it apart from the first film by not opting for an outwardly foreboding, unnerving phone call. So much so that Walton’s actually taken the phone out of the picture by literally having it cut dead. This allows the sequel to tread its own ground rather than march straight through the original material all over again. It’s the same, yet isn’t, and the familiarity solely helps as a jumping off point for the tension. At one point Walton cuts back to shots of the doorknob, ratcheting that tension to a maximum. The viewer waiting on seat’s edge to see it turn, or move even in the tiniest way. This moment never comes. Sidestepping the payoff leaves Walton with unresolved tension, poised for a wicked crash once the perverse and threatening action of the titular stranger breaks loose.
When it gets genuinely disturbing is the second stalking. Like Duncan, this stranger comes back again after the first time. But what this guy does as opposed to Duncan is play a far more psychologically threatening game with Julia than Duncan did with Jill; not to say she didn’t suffer, but boy, this stalker is a doozy. Here, the stranger plays sick games to ingratiate himself with Julia, to put himself in her life, somehow in a twisted frame of mind. When you find out what he’s doing later in the film, it is a trip. 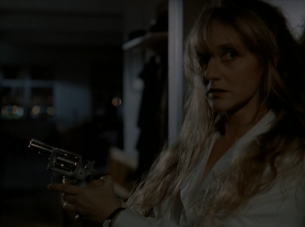 Having both Kane and Durning back brings with them credibility, as well as a degree of continuity instead of a sequel that feels like a cash in, put together to get a quick payday for everyone involved, maybe boost the sales of the original. This way, their characters make the story more interesting; there’s more depth, more at stake. Of course it works out well because Jill’s experience in When A Stranger Calls is sort of how we also saw Sydney Prescott in the Scream series eventually become a victim counsellor over the phone – she provides a unique perspective that plays into Julia’s predicament with her own stalker. While the stalker feels weirder in a spooky way, this sequel is less psychological horror – even though there’s plenty of that – and more a dark, emotional thriller full of mystery.
Still, Walton does play well with the psycho-horror of this screenplay. He makes Julia’s apartment into an ominous, paranoid location where each shadow means potential danger. With lingering shots and choice edits, the apartment is like a haunting character in and of itself, which lurks around the viewer, and of course Julia. Walton and cinematographer David Geddes (Legends of Tomorrow, Halloween: Resurrection) give the film a great look, especially considering this sequel is a TV movie after all.
There are quite a few spectacularly creepy moments and scenes. At one point, the stalker stands over Julia as she lies in a hospital bed – he slaps her over and over, and it’s so horrific because you can clearly see the psychotic behaviour brimming along the edges, past ready to break out fully. SPOILERS! SPOILERS AHEAD! When we get a look at the stranger in his element – a ventriloquist painted black, a dummy on his knee with no facial features – there’s a shocking element to this revelation. Suddenly you understand, all of it. Honestly, this scene starts out funny. Then gradually it becomes unbearable. Totally unsettling shit. Particularly once people start leaving, weirded out by this ventriloquist act, and the owner of the club all but kicks the hell out of the stranger, there’s a sad, pitiful aspect to this man. Sort of emotionally crushing because he’s obviously got issues. Although there’s no connection, no empathy for him – we’ve seen what he does. The final showdown between him, Jill, and Julia is crazy. Very fitting and just as intense. A legitimately frightening finish, at times as frightening as Curt Duncan from the original.

I’ll always love the original most, and I do feel that it is rightfully the better film. That being said, When A Stranger Calls Back is one of the more underrated sequels to a classic horror that, for whatever reason, never gets its due. That’s probably in part because this went out as a TV movie. Not sure why it ended up that way, because it has the makings of a genuine film and Walton follows his own footsteps lightly, treading carefully in most of the right places.
My only complaint is that I wish we were given a bit more insight into the stalker. We do get plenty later once everything kicks up a notch. But there easily could’ve been more. Perhaps that’s part of it being a TV movie. If we got a full fledged theatrical release movie from Walton on this sequel, there may have been changes in that department. We’ll never know.
Despite any small complaints, this Halloween you need to see When A Stranger Calls Back. This one gets a bit more disquieting simply for how it gets a bit more out of control with a stalking stranger even more unhinged than Curt Duncan; if you can believe it.