Morgan (Lennie James) and Carol (Melissa McBride) are being led to safety by a couple men in body armour, the ones they last met in the end of Season 6. On the road they’re overrun by walkers. Injured Carol is toppled off a cart they were carrying her on, though in her usual style she doesn’t stay down long, stumbling off through the nearby woods. Where the fuck are you going, Carol? She sees a woman in a window calling her. Only it’s not a woman, it’s a zombie. Luckily more people on horses show up to clear out the walkers. However, Carol’s only able to see them as people. Oh, man. Her apocalypse has been an absolute nightmare compared to that of others. Morgan keeps marking their way, so that there’s a possibility of heading back. Although I don’t see that happening any time soon.
Finally Morgan and Carol get to take a rest, in a real place again. She lies recuperating in an actual bed. Wind chimes in the window. A sort of surreal moment. Plus, she’s been sleeping a couple days. Only natural. They’ve been brought to a true community, with a bunch of crops, what looks like a schoolhouse, and clearly a clinic of sorts. They’re in the Kingdom, as the locals call it.
Then Carol gets to meet the leader of this place, King Ezekiel (Khary Payton). He’s got a nice pet tiger, too. Named Shiva.
Shit’s about to get real, mama. 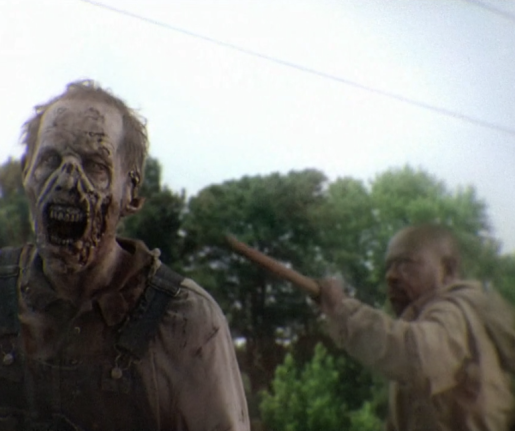 Ezekiel talks like he’s in a Renaissance Fair, referring to their home as “the realm” and y’know, having a tiger around on a big chain, sitting on a throne. He’s definitely a bit much to take in at first. Definitely quite the character, in all sense of the word. No bullshit Carol tells him “I don‘t know what‘s going on in the most wonderful way.” The King lays it out that everyone does their part to earn their keep, and anything the Kingdom reaps is theirs to enjoy. This episode’s title comes from Ezekiel’s analogy of having to take from the well and also replenish the well. For the time being Carol plays into the whole medieval nonsense this guy has going on. I can’t help but wonder, as a man with his own mental illness duo: is this guy okay? Morgan wants to believe, so god damn bad that he’s willing to follow along. Of course we know Carol has no time to deal with this kind of shit, even before she makes it known.
A few of the Kingdom’s members rally together some pigs that went running lose. Side note: lot of great zombie makeup effects that could easily go unnoticed, if you take a second and pause there’s magnificent work to appreciate. On their outing Morgan proves to be a friend of the Kingdom, helping out a younger man surprised by a walker. Ezekiel enjoys Morgan’s skills with the staff; real recognises real and bad motherfuckers know one when they see one. He even gets Morgan to agree to train the kid he helped out, Ben.
Yes, the Kingdom is a place to behold. A local choir group sings a rendition of Bob Dylan’s “Don’t Think Twice It’s All Right.” Carol has a look around, nabbing herself a knife on the sly and pretending to be a good little citizen, excited over “cobbler” and other yummy foods compared to possum and the nasty shit they survived on. She’s tricky, man. Dig it. Snags a set of clothes, as well. Looking forward to her getaway.
Some of the Kingdom’s secrets are revealed to Morgan, as we see they hand over their well-fed pigs – full with walker guts – to whom I can only assume are The Saviors.

Morgan eventually finds Carol gone in the wind. She runs into Ezekiel, though. They end up having a private conversation, as he talks a little straight with her. He knows her game. They speak of the Saviors, about her survival tactics. I love how straight shooting Carol is, not afraid to call Ezekiel a straight up “joke” to his face. She questions his motives for acting like a King, let alone all the semi-medieval speak (he’s just talking fancy he isn’t even talking Middle English or anything). But finally he drops the whole thing, levelling with Carol about how people simply want someone to follow. It’s all a cult of personality. But what if that cult of personality served a good purpose, such as the Kingdom? Sure, he has his ass kissed like Carol calls him out, although they’ve built themselves a community. “I faked it ‘till I made it,” he admits. We find out that Shiva had a near fatal injury. Ezekiel saved her life, which bonded them together eternally. There’s also the fact Ezekiel once did community theatre, so he has them acting chops. At first I thought he was a bit of a nob. Now I actually really like him.
So will Carol stay, or will she (should she) go?
She’s decided to leave, it seems. More effective and happier on her own. Morgan rides with her out onto a nearby road. They say their goodbyes and she heads up to a house where she’d seen the woman earlier. She buries her in the front lawn then makes a fire inside. At the door comes knocking Ezekiel, apple in hand. I have a feeling these two are going to become better friends. Maybe he’ll convince her to come back to the Kingdom. I hope so. 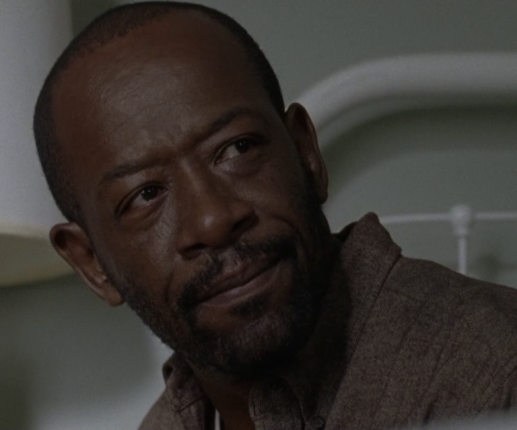 This was a solid episode. Nothing crazy, just bringing us into the world of the Kingdom.
Excited for next week. Following episode is titled “The Cell” and I’m wondering who the focus will be on this time.