Chanel Oberlin (Emma Roberts) hears #5 (Abigail Breslin) from across the hospital. As #3 (Billie Lourd) explains, #1 has developed a “fine tuned” addiction to #5’s pain. Along with Munsch (Jamie Lee Curtis), the Chanels and Zayday (Keke Palmer) find #5, as well as the corpse of Denise Hemphill (Niecy Nash). So now sleazy Cathy has to come up with a story while they dispose of the body. Oh, and they leave #5 to wallow in agony alone. With more dead bodies piling up they’re forced to call the police in.
Downstairs, Munsch shows Zayday a cryogenic chamber she bought with some of the Radwell cash. They put Denise’ s body inside to test it out. Meanwhile, Cathy is still dying little by little.

No longer blue, Chanel and Dr. Brock Holt (John Stamos) continue getting closer. He apologises for the mix up with the medicine, then goes on about his relationship with Ms. Munsch, how he did it only because of being distraught from missing out on Chanel. But she has no “emotional object permanence” and surely they’ll be together sooner than later.
A week later after the publicity surrounding the murders, Munsch’s CURE Institute is booming again. All kinds of strange illnesses pour in and the place is on wheels. Ingrid Hoffel (Kirstie Alley) is up in her business trying to get more and more all the time. Otherwise things are fine, except the fact Cathy is a complete fucking loon. She winds up on a case trying to treat a woman who’s switching from accent to accent, all over the globe. Her name is Penelope Hotchkiss (Mary Birdsong), and she can’t control the voice she uses. Now that’s an interesting one.
Ingrid gets under everybody’s skin, including the Chanels; she calls them “non–doctor idiots“, “dead inside“, “Dr. Tiny Bitch“, among other names. Usually I find Alley a irritating pain to watch, but the writing is too good not to enjoy. Her delivery is perfectly condescending. She has #1 and #3 doing the worst of chores around the hospital, which they’re obviously not happy about, and thems the breaks, right? Not when Ms. Oberlin’s putting her mind to it. Or, y’know, trying to.
Zayday goes to see Munsch about Chamberlain Jackson (James Earl). Turns out there aren’t any candy stripers. Cathy says she hasn’t hired anybody. Certainly not off Craigslist. Might have something to do with all the serial killing going on. Like Season 1, another baby mystery is at hand, and Zayday decides she’s in to solve the puzzle.

Chanel sent out word she’s accepting applications for more Chanels. Concerned about the Green Meanie. #1 wants “cannon fodder” in case he’s intent on doing her in. So when everybody on their previous list passes, they turn to the patients in the hospital getting a couple new recruits.
Then, they have no choice but to talk to someone named Tristan St. Pierre (Pablo Castelblanco). He started writing explicit, lesbian fan fiction about Chanel. He got extremely obsessed with her. Creepy. Tristan is brought in as a Chanel Pour Homme; brilliant title. They have Chanels #7 and #8, as well. All for human shields in the face of murder.
Dr. Cassidy Cascade (Taylor Lautner) and Chanel #3 try to work on Ms. Hotchkiss. In rushes Brock with information, but then it seems as if the accent issue goes viral. All three of them start talking like Penelope, shifting accents themselves.
In the lower levels of the hospital, Chanel gets a scare from Hester (Lea Michele). She tries to ingratiate herself to the Chanels again. And #1 lets her back in. She’s intent on finding the Green Meanie. No matter how crazy things must get.
Zayday and #5 go visit Jane Hollis (Trilby Glover) about her husband who died that night two decades ago. She believes Dr. Mike and the nurse covered that up. Obviously Chamberlain is out of the running for the baby. Or is he? Because Jane’s husband was black.

The accent virus keeps going strong, changing in everybody. The writing does a smart job poking fun, as they even make fun of how bad the accents are, too. Great little bit. They also drop a lot of movie references. Also, Doctors Holt and Cascade and Chanel #3 come up with a treatment to help Ms. Hotchkiss. Moreover, Dr. Holt figures out they’ve contracted “Madonna syndrome.” They have to lock themselves up watching American films to get themselves back on track.
Zayday keeps on trying to figure Chamberlain out. He explains his presence there is only about making people feel good. “I‘ma let my freak flag fly,” he tells her going about doing his Willy Wonka hospital routine. In other news, Cathy has a talk with Ingrid; to fire her. She doesn’t dig the way Ingrid treats the staff. The woman has a drug addiction, however, she knows of Cathy’s disease – blackmail.
The Chanels have a big night planned. A slumber party, including makeovers. Never a good sign when the girls are being nice. Chanel #8 has to go to the morgue to find a gift they’ve supposedly left her. A “sacrifice” to the Green Meanie. Will he take it? Tristan confronts #8 because he wants the gift, putting himself in the way of possible death. When #8 turns up it’s clear who’ll be killed. And boy, is he ever dead.
Naturally, Munsch is pissed. The Chanels are always bringing her more trouble, as if she doesn’t have enough on her own. Chanel #7 is now down with being a human shield, and #8’s been in for a while. Now, Cathy has three more Chanels for admittance; #11 even has eleven fingers. #1 has the girls put to work already cleaning up #5’s “monster dumps” in her bedpan. Man, the writing kills me sometimes. I rarely laugh out loud by myself unless something is really funny; this series does it to me often. Anyways, Munsch wants to find Hester, and she wants #1 to give up the info.
The Green Meanie kills #11, after first doing a bit of homemade machete surgery on her extra finger. That poor girl didn’t last long.
Most intriguing is the finish, as Jane Hollis receives her son for dinner: it’s Cassidy. He was the baby in the belly. And now he tells her that their secrets will be safe: “I‘ll take care of everything.” 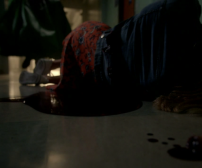 Solid episode. Well worth the wait!
Next up is “Blood Drive” and I anticipate more intensity, foolishness, and more importantly – MURDER.