On the tail of his refusal to sell Nootka Sound, James Keziah Delaney (Tom Hardy) is a man apart after returning from Africa to his old home in London. Over at the East India Company, Sir Stuart Strange (Jonathan Pryce) isn’t happy with those beneath him, with whom he’s charged the task of killing James. And it’s either play ball, or lose your job. Meanwhile, Delaney’s in the wilderness with a shovel; he retrieves a small bag. Of money? Or something more?
Back at the house with Brace (David Hayman), James charges the caretaker with arming himself against whatever’s coming next. We find out more about old man Delaney’s last days, how he rarely ate and only drank beer from a man who sold it for cheap. The paranoia is setting into James, and rightfully so, as his father was poisoned, now there are people fitting to do the same, or worse, to him. A storm is brewing. A bad one, too.
At a ship auction, James puts in a bid of 800 pounds on a merchant vessel. He buys it under the name of Delaney Nootka Trading. Now there are many more knickers in knots. Strange is less than pleased with the news. He wants to understand – “Why did he know so much about the border negotiations?” among other things. Strange comes to believe the Americans are responsible, backing Delaney. But I think it’s all in the name of proper vengeance.

James finds a note with the name Atticus written on it, and he comes across the man whose name he seeks, a rough looking chap named Atticus (Stephen Graham); tattooed from head to toe, covered with butchers blood. They sit and chat. Atticus plans on writing a book, which is awesome. Furthermore, we’re told “when someone wants a man killed they come to Atticus.” We’ll be seeing more of this lad.
Solomon Coop (Jason Watkins) brings a map for whom I can only assume is George IV (Mark Gatiss) in his later years, though the Prince Regent doesn’t approve of the colours for the British ships as blue when the Americans are red. He’s a bit of a crass man, both in terrible health and with an equally terrible attitude. Fuck everybody, is the basic message he sends out to all.
Along the dark harbour at night James runs into a young girl named Winter (Ruby-May Martinwood). She lives at the whorehouse, though insists she’s a virgin. She brings unpleasant news about Helga (Franka Potente) who’s conspiring to do James harm.  So off the pair go – “Are you tricking me?” asks James, perhaps knowing there’s a good chance she is, indeed. Although they have a nice little chat, and Winter feels genuine. She even asks James to take her to America one day. When they come near a ship James swims on by himself. Aboard the boat he lights a fire to blow it sky high.
At home James continues doing what he can to make sure things go smoothly with Nootka Sound. Poor Brace is caught in the folds of the Delaney family mystery, and sees nothing ahead but tragedy. Simultaneously he watches James go through all the same things as his father Horace, speaking on a strange tongue and talking to ghosts. By himself, James comes across a paper from a stage show, the name Lorna Bow circled on the back. 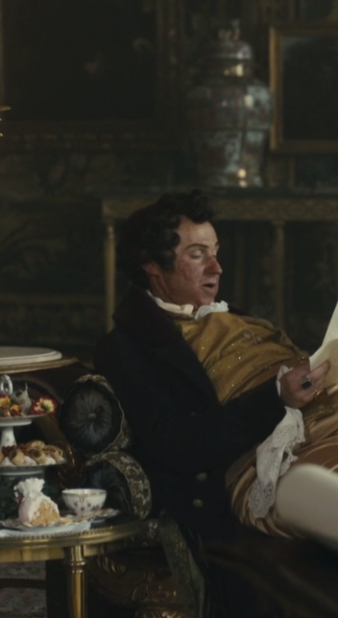 Out on the town James goes to see Helga, he tells her about Winter. He susses out that Winter is Helga’s daughter, which is why she doesn’t rent the girl out. This is all a way for James to try bringing her into the fold, to help him gather intel: “Secrets to me are weapons.” Plus, he wants information on the man Winter told him of, the gent with the silver tooth. And off James goes, farther on his quest. He takes a look at the ship he’s purchased and sizes it up. Down below he feels the pull of memory take him  back to the ship he fled, the slave ship; and what other nastiness lies in those memories? Eager to find out. We get snippets of flashbacks to the ship; brief, sparse moments.
What grave sin has James committed? It’s something which haunts him, that’s all we know for sure.
He goes on trying to thwart the plot against his life. In a crude hospital he finds Dr. Dumbarton (Michael Kelly). He’s an interesting character – a doctor, a merchant, and a spy, so James says. This doesn’t impress the man. Soon James makes clear he wants help contacting the government of the United States, and hopes Dumbarton, an American, will facilitate this for him. I guess he won’t entertain the idea, as a gun comes out and James leaves rather than test the doctor’s trigger finger.
Zilpha (Oona Chaplin) receives a letter. Inside, a large piece of crystal (is it a diamond?). Hmm. Interesting. Across town, James meets with the lawyer Thoyt (Nicholas Woodeson), and lays things out on the table. “You are their whore,” he chastises Thoyt for passing information over to the EIC. And the spineless lawyer has nothing, only excuses and defeat.
Later they head over to the division of old man Delaney’s estate. Everything goes to James. this doesn’t sit well with anybody, least of which brother-in-law Thorne Geary (Jefferson Hall): “That legacy is your death sentence.” Surprising everybody, however, James brings money enough to pay off his father’s debts, making some of the men present happy. Then up turns a woman claiming she was Horace’s wife, Lorna Bow (Jessie Buckley). Even has the paperwork to prove it. Thoyt and James are taken quite off guard. Afterwards, the lawyer goes to see Sir Strange and the others, to whom he must confirm the legitimacy of Lorna’s marriage to Horace. They mull over what their opportunities are with this information. All roads lead again to the death of James Delaney.

The tension between James and his half-sister Zilpha is nearly unbearable. During a grand ball they lock eyes, though she is less thrilled about it, so it appears. Even their body language speaks of a more intimate relationship than just half-brother to half-sister. She feels the lure, yet clearly wants him away from her. “Did you really eat flesh?” Zilpha asks him; one of the many rumours about James and his time in Africa. For now they’re kept apart. I feel like this is simply another avenue in life that will possibly bring ruin to James Delaney. Because there are so many angles from which death and destruction come at him already, another one is bad.
Speaking too soon, as James heads out into the streets he’s finally attacked by a random assailant in the night. He’s stabbed in the guts, left to die in an alley. Not before he kills his would-be killer, biting a chunk from their neck in bloody chaos before slumping against a wall and passing out.

What will become of Mr. Delaney?
I loved this episode, a fantastic follow-up to improve on the first one and makes things more intriguing. The writing from Steven Knight is excellent, as usual. He keeps a lot of nice stuff, plot-wise, close to the hip. Letting things unfold in a slow burn here is perfect for the mystery of James and his time in Africa. Can’t wait to see more. I anticipate there are many more conflicted feelings in regards to our anti-hero, and I’m hoping that Knight is headed where I think he’s headed with the story.