With James Keziah Delaney (Tom Hardy) having been stabbed, and having stabbed back, at the end of Episode 2, what’s left of the man as last we saw he was lying, bloody and dying in an alley?
As far as the attacker goes, the man with the silver tooth, he lies dead on the shore where young thieves pick him clean. They also notice his heart is gone. Eaten by sea creatures, or gone by some other means?
Well James, he’s being worked on by Dr. Dumbarton (Michael Kelly), who stitches him back together again. Luckily the doctor had someone follow him after he left the office previously. He also warns James a bit about his “peacock” swagger around London. James wants word sent to Thomas Jefferson and the US, but Dumbarton’s not particularly forthcoming in his intentions to help any of that. He’s actually trying to get Nootka Sound from Delaney, although that’s not entirely easy, either. James has his own ideas on gaining a “monopoly … for all the tea in China.” This is something Dr. Dumbarton actually understands.
In other news, Prince Regent George IV (Mark Gatiss) gets caught up on all the Nootka Sound business by his man Solomon Coop (Jason Watkins). On the horizon might be war, who knows. Coop tells the Prince Regent of James Delaney, as an “adventurer of very poor repute.” Ought to be interesting to see how George IV and Delaney come together in some way. Could make for some fun writing.

Back at the Delaney house, Brace (David Hayman) continues with helping his old friend James with all his madness. They patch him up a bit before the man of the house feels compelled to run off again on another adventure. He’s essentially waiting now for more people to come kill him. “So, we are besieged,” Brace laments, as if to say: here we go again. Another Delaney, same bullshit.
More Atticus (Stephen Graham)! Bless his heart. He and James are doing a bit of business, though Brace believes the man to be a snake. We’ll see. He’s brought James guns, they discuss what Atticus thought was a partnership; could this drive a wedge between them? For the time being James has wounds that need tending to, but his tough guy stubbornness won’t allow him rest. They’re headed off, he and Atticus. They’ve gone to see Thoyt (Nicholas Woodeson). To make a will, supposedly. Then one of the lawyer’s men goes to the East India Company to see Sir Stuart Strange (Jonathan Pryce) about Delaney. Seems he’s left all his possessions and holdings to “the sovereign nation of the United States of America.” And Sir Strange is all but frothing at the mouth over what’s next: they can’t kill him, they must keep him alive. A strange turn of events, though all due to the cunning of James K. Delaney; he’s playing the lesser of a few evils being in danger only from the Americans at this point.
There’s still all the spookiness of whatever James experienced while in Africa, whatever he did while there and so on. In the dungeon-like basement of the Delaney house, James finds Winter (Ruby-May Martinwood). She cut out James’ would-be killer’s silver tooth out to bring him. She wants to be taught “about magic.” He knows that anywhere he goes, especially at home, is no safe place for anyone, especially a young person such as herself. There’s a Gothic feeling about Taboo, which makes every step further into the world of James Delaney eerie, like a ghost story. He wanders through the decrepit home of his father, memories of Africa and witchcraft of some kind in his head. And he ventures further into the house, finding secrets, unearthing messages out of his own past. It’s stunning as a Gothic slice of London, just before the Victorian Era.
Now James tries unravelling the story of the bird, branded on his back. Found in the base of a chimney in his house. All leading back to the trail of his mother, the supposed mad, savage woman. 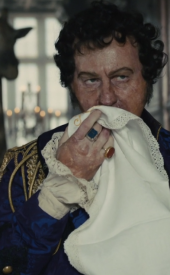 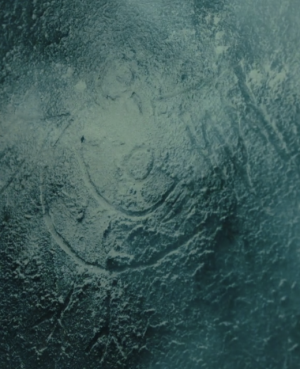 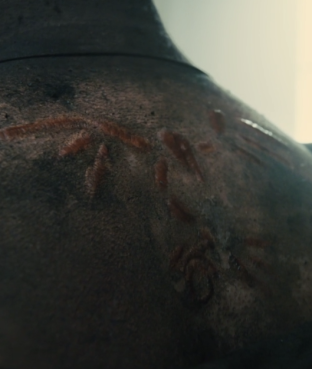 Sir Strange receives visit from Solomon Coop, on behalf of the King. They speak of Delaney, whose will is no surprise to Coop; they have plenty of spies. “Then you know we have a problem that cannot be solved with a musket or a knife,” says Strange. Well, Coop and the Crown have already received an offer from Delaney about a monopoly. None of this is making Strange a happy man, at all. Coop and the Crown are playing the game, taking land and money where they can. And Coop’s also got an idea about why James seeks revenge against the East India Company so relentless.
Widow of Horace Delaney, Lorna Bow (Jessie Buckley) is sought out by Coop at her latest show. More shady deals, no doubt. Meanwhile, James is off in a dark, seedy part of London where, in drag, he finds Godfrey (Edward Hogg) – one of Strange’s men at the EIC. Ah, a bit of blackmail using the secrets James finds. Everyone has their spies. What’s more is that James doesn’t try to hurt Godfrey, he only wants information. They’ve known each other many years, and Godfrey’s been in love with him most of that time. “I‘ll protect you,” James tells him tenderly. Wow. A moment of beauty amongst the darkness I never expected.
Zilpha (Oona Chaplin) is written another letter by James. He talks of his plans, of the “greater good” he is seeking. She writes back about the “depth of our sin” in knowing what they did together, whatever physical love they shared, was wrong. The montage of moments cut over the writing and recitation of letters between the half-siblings is EXTRAORDINARY! Excellent score on top makes this one of the best scenes so far in these three episodes. The narration by both Chaplin and Hardy is fascinating, too.
Zilpha: “Please, I‘m your sister – let all else lie.”
At the Delaney house Lorna’s turned up to tell James she has a lawyer now, that the house is half belonging to her. Seems like Coop has been up to nasty business. Doesn’t particularly worry James. Until she goes on, about owning half of Nootka Sound, as well. So either James gives up his half of the house, or she owns half of that land. He appears fine with working on things with Lorna. He also feels she’s in danger. 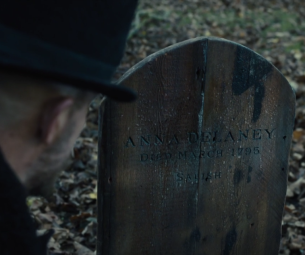 James runs into brother-in-law Thorne Geary (Jefferson Hall), who wants a bit of a chat. He’s interested in the ship Delaney recently bought. Wants to insure the thing for him. But James is already insured, and has no need for the patronising tone of Thorne, or any of the other nonsense he comes in with to boot. “Since you came back our fucking has become almost murderous,” Thorne taunts him. This, as rotten as it is, sticks a dagger in James’ gut.
Later, he goes to meet with Zilpha herself. In a church. And they embrace, lustily for a moment. “Now, I never want to see you again,” she claims. I doubt she’s seen the last of James. At home things are about as equally as awkward with Thorne checking the laundry to see if Zilpha’s menstruating. Weird. She’s really stuck between a rock and a hard place. Thorne is a pig. Even if James is her half-brother, he doesn’t talk to her the way Thorne does, with such a misogynistic disdain.
At Lorna’s next show, James lurks to make sure nobody is threatening her, or trying to turn her to their cause any further. There’s always a plot afoot. When Lorna leaves a woman stops so she can share her carriage. The woman says she’s an “admirer from the darkness” and tries laying lips on her. She’s taking Lorna somewhere nasty, a paying suitor. Only Lorna isn’t a woman with whom to trifle, as well as the fact James is following with a gun. They make off into the night together.
James tells Lorna she must head to Paris, to stay there until all the business with Nootka Sound is finished. At home, he plans for more people to come for Lorna: “And they will come.” 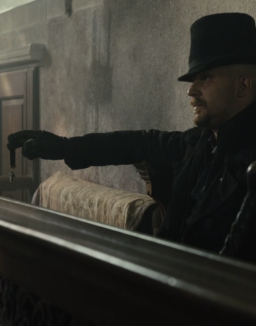 A bruiser of an episode! Really loved this one. Lots of good things happening, lots of darkly interesting things. Excited to see more, and to see what further deception lies in wait for James K. Delaney and Lorna Bow.