David Lynch is one of my favourite filmmakers, his directing and writing equally fantastic. My dad told me about Twin Peaks when I was young (it was on TV when I was about five years old), so in my teenage years I discovered its magic. This lead to seeing Eraserhead with a few friends in a dim lit basement, which blew my mind. On and on through Lynch’s catalogue of work I went, eventually watching his early short films opening up a whole other door into his mind as an artist.
Blue Velvet is a surreal film. Not as steeped in it as much as his other work, though full of surrealism nonetheless. It’s through the absurd Lynch taps into this element, alongside his modern noir-ish plot that digs deep into the underbelly of idyllic American life. What makes the movie so exciting is the dangerous story, looking at this darker side of suburbia in a small logging town, fittingly named Lumberton.
Lynch has said this film inspired Twin Peaks; the way in which he blends the darkness with the absurdism is strangely compelling. There’s an explicit scene or two, depravity taking the reins in violent fashion. Mostly, Blue Velvet takes place in a space where violence is always possible, never far; its threat is debilitating to the progression of everything from innocence to love. The central character Jeffrey Beaumont (Kyle MacLachlan) finds himself pitted against the psychotic, Freudian villain Frank Booth (Dennis Hopper), faced with either accepting his role in a hierarchy of violent men or rejecting the male violence which underpins the light and goodness of Lumberton.

The now iconic opening of the film is perfect, designed like the meticulous opening sentence of a piece of great literature. Lynch starts with those typical images of American life, things he remembers from the 1950s: white picket fence, bright red firetruck with waving firemen followed by the bright red roses of a luscious garden, the beautiful houses like boxes in a row.
He immediately smashes the gorgeous, American Dream-type feeling with Mr. Beaumont, Jeffrey’s father, having a stroke while watering the garden. As if innocence is starting to shatter with it, a child in a diaper wanders up while the man seizes on the lawn. The hose spurts water, and Lynch goes into a slow motion shot, the sound likewise slowed – the dog snaps at the water’s stream, his face looking vicious and snarling, his sounds become sinister. What a perfectly thematic opener. I honestly don’t know how this could’ve been improved; because it couldn’t.
This first sequence is a thesis for Blue Velvet, ending in its statement where we zoom in and the camera takes us into the grass, into the dirt, right to the insects crawling in the earth. An image that sticks with us, coming up again in the end. But it effectively shows us what Lynch is doing, and plans to do throughout the plot – put a microscope over the lives of those in a quaint town. In this story, that involves a young man under threat of violence invading his life, maybe even his very soul.

“It‘s a strange world, isn‘t it?”
Jeffrey’s dropped into a Freudian nightmare of a world, perhaps one to which Oedipus could relate; in a symbolic sense, anyways. He is lured into the dark side of his town by a sliced off ear, yet more importantly the story begins with his father’s brutal stroke. He loses the male influence in his life, falling prey to corruption.
Frank’s arrival is surreal in itself. He switches between two personas – Daddy and Baby. He treats Dorothy Vallens (Isabella Rossellini) as Mother. At the sight of her vagina, and with a gas mask dose of amyl nitrite, he goes from Daddy to Baby, then back again. Likewise, after there’s a change in Jeffrey. Without his actual father around he adopts Frank, albeit subconsciously (perfect for a Freudian analysis), as Daddy. And where his family didn’t introduce him to the darker side of Lumberton, Dorothy and Frank become his surrogate parents, leading him down the garden path to the truth; no matter how disturbing.
This is quickly evident when he leaves Dorothy’s apartment following the first time we meet Frank in his erotic rage. We’re whisked directly to a dream sequence of Jeffrey remembering the events, then he wakes and there’s a strange moment where he seems relieved, touching the wall near a figure: the figure may be, to him, something else entirely but it looks like a vagina dentata sort of image. The influence of Daddy is transforming Jeffrey’s image of women into something dangerous; tying into one of the film’s themes being his journey, as a young man, trying to reject the violence of the male gender through the lens of how his surrogate Daddy treats the surrogate Mother.

Jeffrey walks to and from the hospital during the day and everything is bright, beautiful, positive. In the evening this changes, suddenly even the normal things don’t feel right. For instance, a moment many never catch when the first night scene sees Jeffrey out for a walk in his neighbourhood: a man stands in the grass as his dog on a leash stands on the sidewalk, a reverse of what you’d see like he’s being walked, you almost expect him to squat, drop a coil. One early indication of the surrealism Lynch employs.
Part of the surrealism is that idea of the twisted, half-Freudian and half-Oedipal journey on which Jeffrey goes. Because not only does the story dive into the underbelly of Lumberton, the story itself dives into the subconscious mind. This is best represented in the shot from Lynch after Jeffrey’s discovery of the ear – the camera closes in, further and further, right into the ear canal; figuratively, and literally because the orifice is an ear, into the mind. So, our trusty director dips us into that subconscious, in every way. Once you begin peeling back the layers they shed like skin.
The other surreal moments, the best, involve Frank most of all. First, there’s his amyl nitrite through the gas mask. On the surface that’s absurd alone, but coupled with the whole Daddy idea, you see that Jeffrey’s father has to breathe through a tube while Frank uses the surgical gas mask to inhale his drugs; a weird double image. The doubling continues, too. Frank is captivated with music, in particular the song “Blue Velvet” by Bobby Vinton and Roy Orbison’s “In Dreams” – the doubles return here, with Dorothy singing Vinton, suave Ben (Dean Stockwell) singing Orbison. And Stockwell’s little performance is so unnervingly odd. Strangely enough, the scene that weirds me out most. We see him singing, holding an electrical cord lamp lighting his face, and Frank stares at him, mouthing Orbison’s words, almost in a trance. An addition to the psychosis of Frank, suggesting something behind his fixation that we don’t need to know to find terrifying. 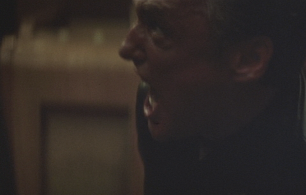 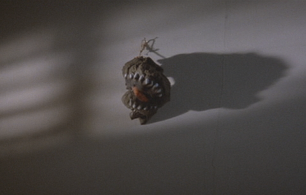 The violence is likely the most surreal of all: the Man in Yellow is dead on his feet, in literal fashion; Lynch shows us a close-up of Dorothy’s chipped tooth in her red lipstick-ed mouth then a little later Frank paints Jeffrey with lipstick and slaps him around, too; Frank’s crew stands by watching in complacence as he commits various unpredictable acts in a violent rage. Just as surreal as the absurdist situations in which Jeffrey finds himself throughout the film, from finding an ear in a field (the ants call to mind an image from 1929’s silent short film Un Chien Andalou) to witnessing the ritualistic sexual assault by Frank on Dorothy.
One of the reasons Lynch’s film acts as an excellent piece of visual literature is how he ties off the imagery. Whereas in the first couple scenes we go into the dead ear’s canal, the camera takes us back out of the ear later, except it’s Jeffrey’s ear, alive and in the sun; a transformative journey, from darkness into the light (a visual motif we see in the use of light Lynch employs in many scenes). In addition, the rightful Mother and Daddy are restored once Frank is dead; Mr. Beaumont is recovering well, the sun is shining, the backyards of suburbia are back to their dreamy quality again. Finally, while the darkness still exists – the robins feed on the bugs, the extent of Frank’s connections and the bad people in Lumberton remain unknown – a lightness is restored.
These elements help Lynch suture together his masterpiece of neo-noir surrealism. One of the greatest films made in the 20th century, a work of dangerous art.