* For a recap & review of the next episode, “The Secret of Spoons” – click here

Right from the opening credits, American Gods pulses with energy with music from Brian Reitzell (music supervisor on Hannibal and composer for 39 episodes, among other credits). Dig it already.
We watch as Mr. Ibis (Demore Barnes) writes of a ship on the ocean, full of Vikings headed for land. They touch shore and head inland, noticing nothing but insects, snakes, all the nastiness. Then dozens of arrows tear down one man, as the others watch the woods in anger and fright. “They did not yet have a word in their language for miserable,” Ibis tells us. They reached out to their old gods for protection, for salvation. In order to get their god’s attention, many men sacrifice one eye (Odin, I imagine) for him. But nothing comes. So they burn men alive, and still… nothing. After that they went to war against one another to summon their war god. Blood flows thick and hideous and savage.
And their god, he does not rear his head. So they go back to their homes, and never speak of “that New World again” for fear of its being out of their god’s reach. What would become America lives somewhere other than under the eye of any god. Poignant, no?

Present day in America. We watch a man named Shadow Moon (Ricky Whittle) pumping iron in a jail yard, listening to a wiry little white dude named Low Key Lyesmith (Jonathan Tucker). They talk about prison, how it changes a man and his mind, his actions. He spends his time thinking of how much he loves his wife, Laura (Emily Browning); when he isn’t working out, that is. He teaches himself coin tricks, whittling through the hours.
Most of all, we see that Shadow is different. Something about him is intriguing, he sees and smells and interprets the world differently than those around him. In dreams he walks through a terrifying orchard full of bones, the trees alive like a malevolent vision of The Wizard of Oz, and in the distance he sees a noose of jagged bones drop from a tree’s branch. Ominous, particularly with white boys in the yard around him threatening death. He’s actually being released early, though. Because his wife died in a car crash. A bittersweetness that could never be undone.
So Shadow goes back out into the world he once knew, now a free man and a widowed one. “Do not piss of those bitches in airports,” Low Key tells him while remembering a conversation they had woodworking in jail. Lots of free man v. prisoner talk; you must learn to adapt to your environment, inside or outside. With Shadow unable to get home right away he sits in an airport and waits for his flight, lost in his head. He witnesses a man (Ian McShane) at the check-in looking rather dishevelled and sort of insane who gets himself bumped into First Class. And once Shadow finds trouble with seats on the plane, he’s bumped up, too. There he meets the raving gentleman: his name is Mr. Wednesday, and he is one crafty character. He knows quite a bit about Shadow, just from looking at him, so they get to talking and discover they’re fellow grifters. Perhaps a job opportunity, who knows until thy get where they’re headed.
In the meantime, Shadow has terrifying dreams. Of a massive tree, from underneath a buffalo-like creature with horns, breathing fire walks towards him. Then he wakes up and the plane’s landed. He decides to get driving for the rest of his trip instead, stopping along the way to scream into the sky as “Torture” by The Everly Brothers plays on.

Bilquis (Yetide Badaki) is in a bar where she meets a man named Paunch (Joel Murray). They’re dipping into the online dating, or at least online something. She brings him back to a luscious bedroom drapped in velvety, red curtains, blankets, pillows; candles for the mood. They get down to business, she tells him: “I‘m not what I once was.” And then she asks him to pray to her, as if she’s a goddess. Something possesses him, he speaks to her like a man kneeling before a deity. She pushes him between her legs, and then he is no more. Like she swallowed him whole. A new life in her eyes glowing.
At a bar, Shadow gets himself a bit of food. He also runs into Mr. Wednesday all over again. He isn’t happy, either. Doesn’t much want to hear of this job the guy talks about, until Wednesday appears to know more than he should about his life. Worse still, Laura died in a car crash with Robbie. Nobody to which he can go home now. And so, the job prospects are suddenly looking better.
Out of nowhere, Shadow meets Mad Sweeney (Pablo Schreiber), the tall “leprechaun” from Ireland. They’ve got a link: Wednesday. A big, happy, working family. Sorta. Either way, the just released prisoner sees an opportunity in front of him; a sketchy one, all the same. Reluctantly, he puts himself at the service of the mysterious man, albeit with conditions and terms of employment. We likewise see Sweeney is even better at the coin tricks than his new buddy. He also likes to fight. And I mean he LIKES(/LOVES) to fight.
Wednesday: “You‘re my man now”

Heading back to Eagle Point, Shadow goes to pay respects to his deceased wife. Furthermore, he discovers the truth about his wife and Robbie. She was giving him a blowjob, according to Robbie’s wife Audrey (Betty Gilpin). Ouch. What a way to find out, at Laura’s funeral no less. He says goodbye, in another taste of the bittersweet; mostly bitter.
Later on the road at night, Shadow experiences something strange. He hears fireflies buzzing in a clearing by the road, though they disappear as he comes close. He finds a strange little device out there and it leaps at him, enclosing his head inside like a helmet.
Then we dive into an eerie, dream-like state. Like a simulation. He meets Technical Boy (Bruce Langley) – who smokes synthetic toad skins – and his boys. Shadow must produce answers about his work for Wednesday, or else face the wrath, which could mean death. The kid wants to know about Wednesday’s plans.
We’re seeing the Old Gods v. the New Gods (a.k.a technology, in this case). This is the beginning of war. And Shadow is caught in the middle. He’s beaten by the faceless henchmen, then dragged into a field and hung from his neck. Until the rope breaks and the henchmen are cut down bloodily around him in a field of gore.
Technical Boy: “We‘re not just going to kill you, Shadow. We‘re going to delete you.” 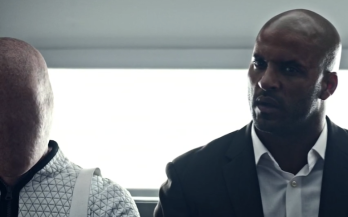 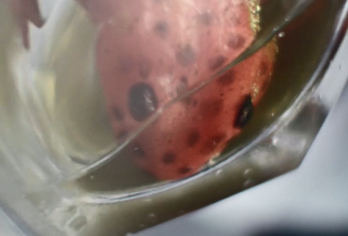 An amazing, fascinating adaptation of Neil Gaiman’s novel, one I’m currently reading. Next episode is titled “The Secret of Spoon” and already they’re doing interesting things. Not that I ever doubted they would, with Bryan Fuller in the mix.
So much more to come!