We start on 1697 – Coming to America – when slaves were being transported by ship. One of them calls to Anansi who is a character from African folklore, usually in the form of a spider. The slave regrets he cannot do anything to honour him in those chains. But that if the god is merciful, he will repay him for the rest of his life. Then they’re shocked by a man in a fine suit, something they’ve never seen: Mr. Nancy (Orlando Jones). He tells them of a story where “once upon a time a man got fucked,” which is, essentially, the story of African Americans. He tells them of what awaits at the end of their journey. He gives them a quick lesson in how fucked they all are, and how bad American will be for their people.
So either kill the Dutch motherfuckers, or go to the land of opportunity where they’ll be fucked for hundreds of years. He sets one man free then they’re all raging for justice. The ship starts going up in flames and everyone burns while Anansi crawls ashore.
Mr. Nancy: “Angry is good. Angry gets shit done.”

Who saved Shadow Moon (Ricky Whittle), at the mercy of Technical Boy (Bruce Langley) and his Children? He’s in a hospital getting stitched and taken care of, then goes straight for Mr. Wednesday (Ian McShane). They chat about what’s happened, and Wednesday knows all about the toad smoking kid. Meanwhile, Shadow isn’t pleased, seeing as how he was “strange fucking fruit” for a brief moment in time. However he doesn’t realise that Wednesday is already plotting.
That night Shadow dreams of his wife Laura (Emily Browning) coming through the door. She says she isn’t dead. Yeah, that’s comforting. Of course it’s a dream, but the guy’s already been through the ringer. Nightmare land in his head won’t help a thing.
The next day he goes back to the house he shared with his wife, before he went away to jail. Everything’s laid out for a Welcome Home party, only it’s now depressing and sombre. Everywhere are the memories of Laura, in each room. So he packs everything away in boxes. Finally, after staring at it all day, he opens the box from the coroner’s office. Inside is her wedding ring, her phone. He looks through her phone to find a dick pic from Robbie, confirming the worst. That’s some ugly shit.
What’s next after Shadow leaves Eagle Point? He and Wednesday go on the road with CCR blaring from the speakers. Only deal: no highways. They need to go to Chicago so Wednesday can pick up his hammer. We’re treated to an excellent visual here that I won’t spoil by even trying to describe it, other than it makes the sky look WILD!

The two make a pit stop. Shadow goes to pick up things on a list he’s given, everything from maps to vodka and all kinds of stuff. Suddenly, Media (Gillian Anderson) speaks to Shadow from a television screen. More of those great visuals, too. Media comes through on I Love Lucy as Mrs. Ricardo herself. She talks a good game, offering to employ him. Another one of the New Gods. Oh, this strange new world!
Media: “Don‘t fight gravity, Shadow.”
Shadow believes it’s all in his head. He tells Wednesday about his run in with Lucy, thinking his time in jail ripened his brain to mush. His older gentleman friend explains that mad isn’t the biggest sacrifice that might need to be made. Later he goes on a nice spiel about messages, tossing the cellphones out the window and lamenting those days of opening letters; such great delivery from the master, Mr. McShane.
A journey through the universe takes us to Bilquis (Yetide Badaki), who we last saw take a man home and devour him.. sort of, yeah. She’s got a new guy. Then a new woman. And the endlessly sexual cycle perpetuates, on and on. Note: perfect cut is edited when we see the frame jump from Bilquis naked in bed to a statue of stone standing tall, breasts in hand; clever work. She is most certainly one of the Old Gods, of whom I can’t wait to see more.
Wednesday goes to see several people, including Zorya Vechernyaya (Cloris Leachman), an old Russian woman. That’s why they picked up that vodka, particularly. She loves it. Then there’s the other sisters, Zorya Ultrennyaya (Martha Kelly) and Zorya Polunochnyaya (Erika Kaar). Vechernyaya tells fortunes, offering to show Shadow his own. There’s also Czernobog (Peter Stormare), covered in cow blood and not happy to see Wednesday.
Zorya Vechernyaya: “Family is who you survive with when you need to survive” 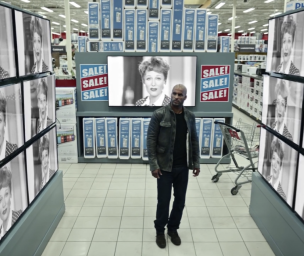 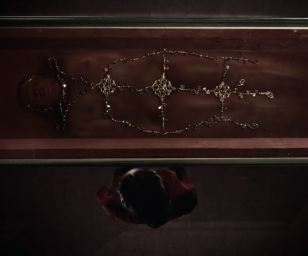 Constantly smoking, Czernobog refuses to go along with Wednesday. He doesn’t want to do any of what they used to do anymore. Whatever that was; he also has a brother (for those who don’t know he’s a Slavic deity, the Black God, considered as a counterpart to Belobog, the White God). What we’re treated to is seeing how this Old God, he’s a dangerous one, has a sketchy reputation. He doesn’t like killing the new way, either. He likes the old fashion way.
Czernobog: “To give a good death is art”
After dinner Shadow sits to play checkers with Czernobog. Then we discover his hammer. A massive sledgehammer he keeps on the mantle. He is a bad motherfucker, that’s for sure. He’s sad his tool doesn’t get fed the blood it needs anymore; Shadow has visions of it soaked in gore. Oh, this place is creepy.
Now, if Czernobog loses chess he’ll agree to go with Wednesday. If he wins, Shadow takes the hammer to feed it some of that good “sunrise blood” in the morning. And the game is on. They play down to the last pieces on the board and poor Shadow’s not doing so well. He loses at the bitter end.

So what’s going to happen next time? Czernobog is owed blood he’s promised.
Next episode is titled “