Season 4’s premiere starts several months on from the finale of Season 3 when all hell broke loose, and the group lost Andrea. They’re still in the prison, still together. Trying to live whatever kind of normalcy is available to them. Rick (Andrew Lincoln) spends his day out in the garden tending to the crops. He finds a gun buried deep in the soil, like he’s tried to bury the violence with it. Is he just kidding himself? Yeah, I think so. If you’ve watched the series all the way to where it’s currently at, as of the time of this writing (end of Season 7), then you know pretending violence isn’t part of the equation is merely fooling oneself.

One thing that’s improved since last we left the group is the relationship between Rick and his boy Carl (Chandler Riggs). They do the farming together, looking after the field and their pig, Violet. Dad gives out an important lesson, though: don’t name the animals they’re preparing to slaughter for food.
Everyone else is doing well, a bigger family at the prison now with those they saved from Woodbury. Funny to see how people look up to Daryl (Norman Reedus), thanking him for the food he hunts, et cetera; he’s like a folk hero in their community. Carol (Melissa McBride) is taking on more and more responsibility, an active role in looking after their home. Glenn (Steven Yeun) and Maggie (Lauren Cohan) become further attached after their engagement; he worries worse than ever about her safety, the stakes somehow higher for the now. And new people like Karen (Melissa Ponzio), they’re adjusting to life and being productive members of the prison community. A man named Bob (Lawrence Gilliard Jr) ingratiates himself to the group, Sasha (Sonequa Martin-Green) particularly. Trying to make himself useful to them for giving him shelter.
Also, Tyreese (Chad Coleman) and Karen are clearly a full-on item, plus Beth (Emily Kinney) and Zach (Kyle Gallner) are together. Exciting to see because it means different stories for the group as a whole. One story I’m glad is continuing? That of Michonne (Danai Gurira). She comes back from a run on her own with comic books for Carl; she’s definitely staying as part of the prison crew. And as always, there’s a ton of work to do. Everybody has their thing, their chores, various responsibilities to make their tight-knit community work. Hershel (Scott Wilson) keeps assuring Rick that transitioning into a more farmer-like existence isn’t a bad thing. Although people worry he doesn’t carry a gun anymore: “We want you to be safe.” He doesn’t listen, and it’s because – as I mentioned – he is literally trying to bury the violence inside him, or at least he’s trying to pretend it doesn’t exist; out of sight, out of mind.

Later, out past the walls of the prison, Rick comes across a hungry woman in the woods. She’s found a deer carcass. She needs to get food back to her husband, they’ve been starving for days on end. Rick offers up food he has with him. Her name is Clara (Kerry Condon), she wants to know if he has a camp. Life’s been rough for her, it’s obvious by the layers of dirt caked onto her skin. Rick also mentions “three” questions he needs to ask the couple before they can possibly come back to his people. So she leads him on to wherever her husband is waiting.
Kids at the prison fence are naming the walkers. Carl finds some of them doing it, he chastises them as his father did when he was naming the pig. Moreover, we see the difference between him and the others. He’s grown in a way they aren’t yet. They’ve been relatively shielded from the horror of the world, while he’s had to shoot his own mother to prevent her from turning.
Daryl leads a group of people in town. One fun thing is watching Zach try guessing what Daryl “did before the turn.” Today, he guesses homicide cop, which gives Michonne a damn good kick. The group get into a store, only they don’t realise up on top of the building an army helicopter’s already crashed. And I’d be willing to bet that’ll cause a bit of shit. Doesn’t look like the roof is too stable.
Clara leads Rick on through the trees, explaining where she was when the apocalypse began and how she got herself to that moment. She talks of her husband, how he saved her life, so on. She talks of survival, by any means necessary.

In the store, Bob and others load up on supplies. He goes to the wine section. Above him, the ceiling leaks. Then a rack of wine tips over on top of him. Walkers on the roof notice the sound, walking further towards the helicopter. They start sinking through the weakened structure, falling inside one by one. A terrifying sequence, very unique! Lots of good blood and guts, too. An absolute shitshow. Bob nearly gets the chomp before Daryl saves him. Unfortunately, young Zach gets bitten and chowed down on by a nibbling zombie.
When Rick gets back to Clara’s husband, he finds something incredibly disturbing. First, she attacks him with a knife. After that she stabs herself in the gut, demanding to become undead. Like the husband she couldn’t bear to let go. She finds out the three questions, as well: 1) How many walkers have you killed? 2) How many people have you killed? and 3) Why? And we don’t see it, but the husband’s decapitated zombie head lays not far from the dying wife.
Carl finds that there’s not really any reading time for the kids. It’s a ruse, so that Carol can teach the kids how to use knives, to defend themselves. We also see one of them is feeling sick. Carl isn’t happy when he sees what Carol is up to, though she begs him not to tell his father.

Another taste of unhappiness comes to Beth, more loss as she finds out that Zach has died. “I don‘t cry anymore,” she tells Daryl. Glad for the time she had with him, rather than sad for not having him around. The two bond over loss, as he mentions he hates losing people. Something that won’t ever change in this new world.
Worse things are brewing in the prison’s darkness. That sick boy, he’s got something bad. And he ain’t doing so hot. As in death, and once he comes back there’s no telling how many others will get bitten, infected, sick, or who knows what. 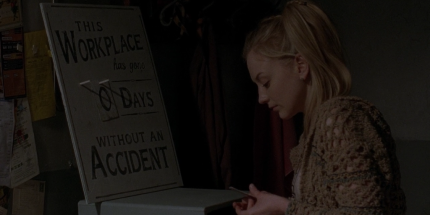 Stellar episode. Love this one because it’s a solid season premiere, as well as the fact it leads into more stories, more intensity and emotion, more action, MORE EVERYTHING for the beginning bits of Season 4. Next is “Infected” and, you guessed it: there’s trouble!