Full disclosure, I’m a party pooper.
Don’t really enjoy horror comedy, unless it’s pitch black. Mostly I prefer a good horror with tinges of bleak, dark comedy. That’s not to say there aren’t a ton of fantastic horror comedies out there. Far from it. Every few years there’s a truly excellent one, as well. From Peter Jackson’s Dead Alive right up to Shaun of the Dead and Tucker and Dale vs Evil; I really enjoyed Cooties, most recently, a film that actually made me enjoy Rainn Wilson.
1980’s Motel Hell, while not perfect, is a whole lot of fun. It’s gory and foolish and sometimes you’ll ache from the creepiness. I could’ve used it even darker, more disturbing, but still, there’s enough of that for most.
What makes this enjoyable is how far director Kevin Connor is willing to go with the screenplay from Robert and Steven-Charles Jaffe. Originally it was meant to be wilder, darker than it is already. Yet when a horror comedy’s willing to not take itself too seriously, and satire’s the aim, getting silly is an admirable quality. Whether it’s riffing off Hooper’s Texas Chain Saw Massacre or Craven’s Last House on the Left, Motel Hell retains its own brand of madness by being eerie and holding onto its satirical humour. 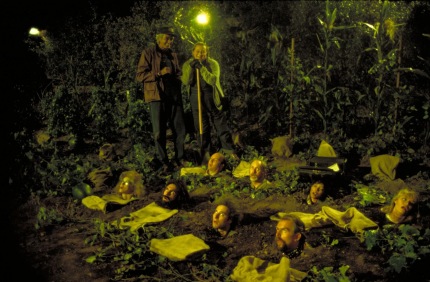 The film’s a satire of the horror genre, as a whole. Mostly we get the sense Hooper and Leatherface’s clan are part of that. Obviously the smoked meats is explicit, not exactly a subtle thing. Even Rory Calhoun’s Farmer Vincent feels like a more charming version of Jim Siedow from The Texas Chain Saw Massacre. What we get more of here is the industry side of meat. Whereas Hooper’s indie horror classic keeps a relatively tight focus on a sole cannibalistic family, Motel Hell envisions one man using his tasty meats to feed the people, to do his part in the grand scheme of things. Ida (Nancy Parsons) is a totally different character than Leatherface, clearly, but she occupies a similar role, she’s an unthinking murderer, doing whatever Vincent needs, just as Leather does whatever’s needed by the family.
Then there’s the similar treatment of cops as Craven, whose Last House on the Left darkly juxtaposed the sadistic criminals against a couple bumbling, idiotic police officers. Here, the story’s got Vincent’s brother, a dim-witted-type of dude, jealous of the farmer, his special recipe for the meats, so on. So he not only plays the dumb cop stereotype, he’s also a corrupt one, too.

On top of it all is a further reaching satirical vision, extending to food, how we relate to it and how it gets to our plate. The satire blows up the idea that people don’t want to know how their meat got to their plate, that they’d rather not think about how slaughterhouses operate, what happens in them. They don’t want to know about the suffering of
There’s also the delusion of Vincent that he’s somehow doing the world a favour. He isn’t merely killing for the sake of killing, he’s got meat to chop, sausages to stuff! He’s got hungry mouths to feed. Likewise, we see the transgressive taboo of cannibalism questioning what meat are people willing to eat if hungry enough. From dog to frog to human beings. Humans aren’t solely killed or eaten, they’re treated like food from soil to the plate. Vincent plants people straight in the dirt, up their necks. This is his sort of way of turning people into food not only literally, but figuratively, as well; to assuage the initial taboo unease of eating flesh. Making it, in a sick sense, palatable (insert comedy drums) to those with qualms about consuming people.
Finally, Vincent’s delusional mind sees people as food equalling a means of population control, solving world hunger. He wonders, how bad do we want to solve these issues? Bad enough to exchange morals for full bellies? Strong enough to break one of the greatest taboos of civilised society? And plus, if people enjoy it, supply and demand, right? Who’s Vincent, a quaint American farmer trying to make a living off the land, to argue with what the consumer wants?
After all, it’s a capitalist world! Maybe this gives more weight to the final duel, the chainsaw fight calling to mind, again, Last House on the Left briefly.
A far reach, but alongside the satire of horror iconography – Vincent needs to wear the pig head as a mask in order for this to be a slasher horror, by the unwritten rules of the pantheon of Horror Gods – the pig head makes our farmer into the capitalist pig, his only interest in making smoked meats out of people was to help himself, not the world, not the hungry; only himself. While it’s hilarious on one level, it’s pretty brilliant on a symbolic plane. 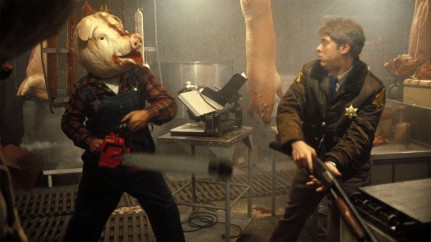 When I watched Motel Hell for the first time only recently, I thought it was decent. Nothing more. After a week, I gave it another go, and my opinion changed, greatly. What felt a bit funny became riotous. The disturbing, darker bits came out with more emphasis. And Rory Calhoun’s performance knocked me out, his disarming charm and old school American wit making Farmer Vincent into less a creepy backwoods sort of guy than the archetypal character we expect, such as Siedow’s character in The Texas Chain Saw Massacre.
I’d put this off because of my slight disinterest in horror comedies, and I’m realising now, more than ever, this prejudice needs to stop. Because there are lots of brilliant, smart films like this in the horror genre which do equally as well with their comedic elements.
Absolutely recommended for any Halloween horror-thon. The perfect flick for a get together with friends in the midst of October. It’ll get you nice and prepared for the 31st with a dose of dismembered corpses and laughs in one neat package.