We open on a bunker in the woods. It’s filled with old photographs, newer ones, newspaper clippings, grenades, rifles. All sorts of things. A narrator lets us know that time is just a loop, it repeats, the past comes back to bear on the present.
And so we go to June of 2019. We see a man, Michael Kahnwald (Sebastian Rudolph), in a dingy room step up on a stool, throw a noose around his neck, then, well, you know. In a photograph is Michael with two women, and his son Jonas Kahnwald (Louis Hofmann). A letter’s left not to be opened before November 4th.
So, what is coming? What’s the significance of that date?

Skip to the 4th. Jonas and his mother Hannah (Maja Schöne) live their lives as best they can. She has a lover, Ulrich Nielsen (Oliver Masucci), who sneaks out the back and down the drainpipe to keep it quiet. On the wall is that picture, of who we realise is Hannah’s husband Michael, her, Jonas; but the other woman’s been ripped out. There’s a lot going on underneath the surface here already.
The town’s surrounded by woods, what looks like a nuclear power plant’s stacks. Jonas sees a therapist, Peter Doppler (Stephan Kampwirth). They take a stroll through nature, talk about his father’s suicide. We also see the woman torn out from the photograph, Ines (Angela Winkler); assume this is Michael’s mother. She has the letter, kept in a box, waiting to be opened.
Oh, so it turns out that Ulrich is married. His wife is Katharina (Jördis Triebel), and he’s also got three kids – Mikkel (Daan Lennard Liebrenz), Martha (Lisa Vicari), and Magnus (Moritz Jahn). The plot really thickens. In this small German town there are many, many secrets. We’re about to start unravelling them all, too. Tensions are high, as well. A young man named Erik Obendorf (Paul Radom) is missing, his parents are mad with worry. The cops are, of course, taking the brunt of abuse for not having found him yet.
In the meantime, in a cave on the edge of town lurks a hooded figure. As if the cave wasn’t spooky enough. 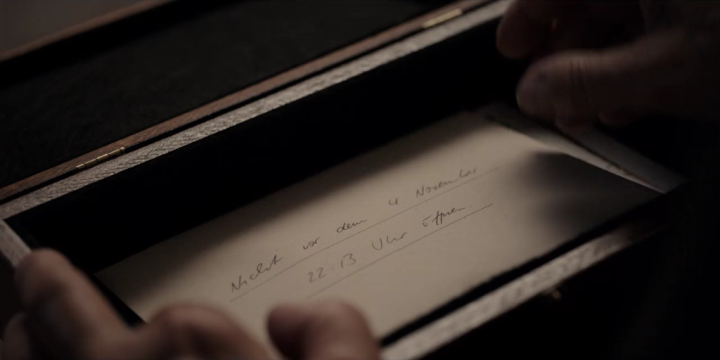 We find out more Franziska (Gina Alice Stiebitz) that Magnus is the son of the principal at their school. Adds a whole other layer to things. Then there’s Jonas, discovering that in his absence his friend Bartosz Tiedemann (Paul Lux) is now with a girl he clearly has feelings for, none other than Martha. LORD, this is so delicious twisty, and barely halfway through the initial episode. On top of that, Ulrich is also a member of the police force, and his partner is Charlotte (Karoline Eichhorn), wife of the local therapist.
Rumours fly about Erik. We hear through the cops that he had a phone, money stashed, that he did not take. Suspicious. Then Bartosz mentions to Jonas that Erik’s dope may “still be in the caves.”
Ulrich goes to see his mother, Jana (Tatja Seibt). She fills us in on more, about her son, his brother, Mads. The boy went missing 33 years ago. So similar to what’s happening now with young Erik. Could there be something larger at work? We’re given a quick glimpse of an eerie bedroom decorated for a little kid. A small TV plays an ’80s music video for “You Spin Me Round (Like a Record)” by Dead or Alive, blaring the sound. In the middle of the room is a terrifying sort of chair with restraints around it. Erik is in a bunk bed. He clamps hands over his ears and rolls over to try and sleep. WHAT? I’m spooked now.

Note: The cinematography, combined with the locations, the sets, is absolutely out of this world! Courtesy of Nikolaus Summerer, who was director of photography on a film I loved, The Silence. He’s done a bunch of other stuff, but that was one of the best films since 2000. Glad to see his brilliant work put to use here.
In the woods, Jonas comes across Martha. She feels bad for how things went, regarding Bartosz. While Jonas was away, in the aftermath of his father’s suicide, things changed. He doesn’t hold it against her. There’s obviously something between them. They join the rest of their friends, out wandering at night, wondering what’s happened to Erik, coming up with all kinds of awful scenarios.
At a town meeting, which Katharina heads, everyone’s got their own concerns. People are worried, they feel unsafe. Doesn’t help when old Helge Doppler (Hermann Beyer) – perhaps Peter’s father – barges in telling them “It‘s going to happen again!” dressed only in his pyjamas. A truly ominous moment.
The group of friends in the woods, looking for Erik’s stash, find Franziska already there. Bartosz wrestles the drugs away from here. Right before they hear a strange noise emanate from the cave. Their flashlights flicker, the noise grows louder, almost like it’s chasing them as they flee. Jonas stumbles, then he hears a voice speak his name quietly in the shadows; he turns to see his father, covered in blood, maybe oil. When they all make it out of the trees, they can’t find little Mikkel who’d been with them. Uh oh.
Simultaneously, Ines opens the letter her son left before killing himself. She weeps.
And then the call goes out to call the parents, once the kids can’t find Mikkel. A frantic Ulrich goes barrelling into the woods calling out for his boy, running up to and inside the cave. 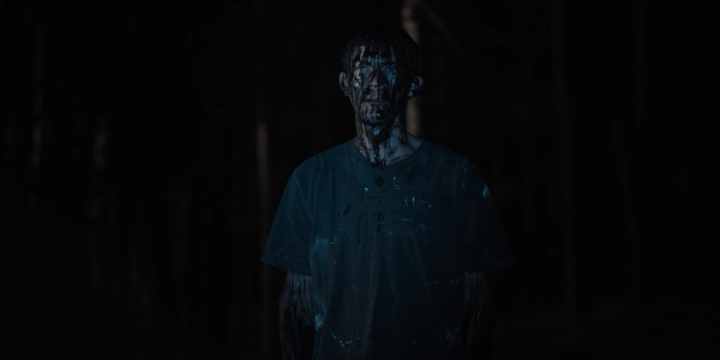 Now, another child is missing. Police units are crawling all over the woods, the cave, searching for any sort of clues, any leads whatsoever as to what’s happened to Mikkel. Charlotte is up there leading the investigation; she gets a call from her husband, who seems distraught, wanting to tell her something but unable to get it out. What’s he hiding? He repeats the AA mantra of accepting “the things we cannot change” and all that.
Police find a child’s body in the forest. Sadly, it turns out to be Mikkel. At least that’s what they believe. Until Ulrich turns up, horrified, and then discovers it’s another boy. Badly disfigured. With him a Walkman, still playing away.
Thus we’re taken back to that odd little room, with the ’80s music playing on TV. Erik is being locked into that strange chair, a piece of rounded metal put around his face. Will he suffer the same fate as that dead boy?

WHOA. Like, I’ve been expecting this series to be good, but the first episode completely blew me away. I mean, it’s just an utterly incredible episode, and it’s got me hooked.
“Lies” is next. You bet the lid is gonna blow right off the secrets in this little town, any minute.