The big boxing match between Bonnie Gold (Jack Rowan) and Goliath (Dino Kelly) is on. A sold out crowd ready to watch these two men fight it out in the ring. And all around is danger, as Alfie Solomons (Tom Hardy) shows up to meet Tommy Shelby (Cillian Murphy). What’s the Jewish baker decided on? Has he accepted the offer of Luca Changretta (Adrien Brody), or will he choose to aid his friend? He says he’s had a “revelation.” That it’s time to take a rest. Seems he’s resigned to the idea of everything being over at this point. Yet he’s cryptic, more than usual.
“It‘s been that way ever since the war, innit? The Americans. Big fucks small.”
The fight starts while Arthur (Paul Anderson) rails coke ringside, drinking, cheering on Bonnie. The big man Goliath gives him a good few whallops. The young lad makes it through the round, getting some advice from papa Aberama (Aidan Gillen). Arthur’s feeling antsy, so Tommy is keeping a lid on him. In the ring, Bonnie takes a fine beating.
Polly (Helen McCrory) talks in the bathroom with Lizzie (Natasha O’Keeffe) about the pregnancy. Not long and Ada (Sophie Rundle) shows up, she hears of the baby, too. They all have a drink while the men are “screaming for blood.” In the meantime, Pol uses the Gypsy magic touch to figure out Lizzie and Tommy are having a girl. Linda (Kate Phillips) comes in to snort coke, be a bit rude. Quite the family.

Bonnie’s waiting it out, trying to last until the fourth round, like Tom suggested. The whole time Arthur knows something isn’t right by the ring. He tells his brother that the men there aren’t even worried about the boxing, they don’t look or move right. Tom passes it off as the coke’s effects. But he shouldn’t be so sure.
The ever paranoid eldest Shelby tails one of them when they leave. Sure enough the guy’s gone to get a garrote. He keeps looking for the man, soon Tommy comes looking for his brother. Before he gets there, the man garrotes Arthur who slips a couple fingers in, nearly having them cut off; he passes out. The man’s about to put a bullet in him and Tommy stops it. But is he too late?
Yes, sadly, and now Tommy, Pol, they’re scrambling to keep themselves and everyone close to them safe. Poor Linda finds out the news by the ring, falling to pieces. Simultaneously, Bonnie’s put Goliath down for the count, TKO in the centre of the ring. A true David versus Goliath match. When the lads find one of the men involved, they beat him. Finn (Harry Kirton) is ordered to “take his eyes” using their signature blinder caps.
And right afterwards, Tommy storms the ring, firing off shots. Nobody moves. Charlie (Ned Dennehy) calms him down, diffusing the situation. Just barely. No telling what kind of hell is about to erupt around Birmingham. Not to mention what sort of madness will go down between Tom and Alfie. 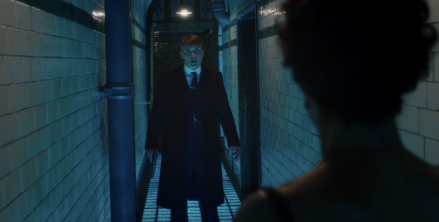 All of Small Heath mourns the murder of Arthur Shelby. A volatile yet strangely compassionate man, at times. Although business must go on, too. Pol gets a call from Michael (Finn Cole). She explains he’ll be coming home, what happened. When he gets back he’s told the plan is he goes to New York, on company business. The family’s not doing well, to say the least.
In a field, Arthur’s being given the Gypsy send-off. That’s when Audrey Changretta (Brid Brennan) comes, to tell them the “vendetta is won.” They want all of the Shelbys things, everything they own. Or else Luca will kill all the remaining family.
Speaking of Luca, he’s gone to see Alfie. We hear more info on the Jew, that he was a Captain in WII. That’s smart thinking. Changretta manages to head off a nasty explosion that Alfie left for anybody coming to barge through his door.
So, what’s Tommy going to do about all this now? Let him have it. Not in the rough and tumble way, either. They’re handing over everything. Walking away. I can’t help feeling there’s more to that plan, that they aren’t going to be able to walk away so easily. Or that Tommy’s not willing to just let the death of his brothers slide. Thus, Tom, Pol, Finn, they meet with Luca and his well-armed men. All the papers are there for Tom to sign over everything to the Changretta family.
Except the Shelbys are smart. They’ve been talking to people in New York about Luca, the liquor business. They talked to Alphonse Capone himself. Seems that the men behind Changretta have been purchased, they’re not loyal to Luca; only a dollar. Even the guy’s right hand man Matteo (Luca Matteo Zizzari). When Luca breaks out and tries doing the job himself, Tommy beats him brutally.
This is when we discover Arthur is NOT DEAD. It was a ruse, to sucker everybody in. Even Linda had to be deceived. And what we wanted to see from the beginning, the eldest Shelby killing Luca, now happens, when Arthur puts a bullet in his face. “Tell your boss what you saw here today, tell him you don‘t fuck with the Peaky Blinders,” he tells the remaining Italians as they leave.

Cause for celebration. Arthur also says he wants Tommy to take time off, to relax. They’ve been fighting enemies for so long, he’s worked so hard, they’ve lost so many. Time to take a vacation.
This brings Tom to the beach, where he finds Alfie walking his dog. The Jew goes on about being “riddled with” cancer. He talks and talks, like always. Finally, Tom goes to shoot. He gets Alfie right in the face, taking a bullet to his side. But he gets up and walks off, leaving the dead baker with his dog in the bloody sand.
Skip ahead three months. The beautifully haunting “Pyramid Song” by Radiohead plays. Tom Golfs with Finn. He sits by the water, suddenly having a PTSD-like symptom, hearing guns in the woods he tumbles to the ground like they were bombs from the war. Oh, my. Back then it wasn’t even called PTSD, nor was there any help for it. Only booze. He is in rough fucking shape. Almost like he’s right back where he started after coming bac from France in tatters. Difference being he’s a father now. Pol tells him that they live “somewhere between life and death, waiting to move on” and that’s just what their Gypsy blood dictates.
Tom: “I know what this is. It‘s just myself talking to myself about myself.” 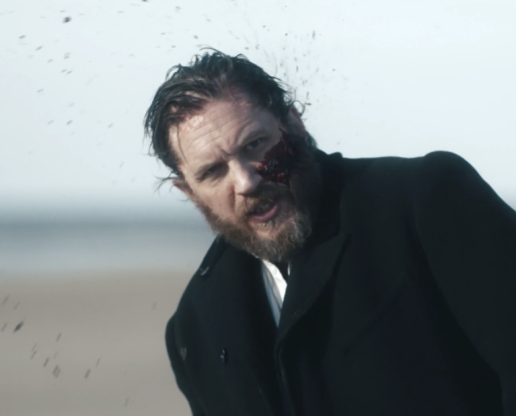 Down at the shop, Tom returns after his vacation of golf and fishing. Arthur’s glad to have him back. Ready to get moving on whatever’s next. He sends a letter for Jessie Eden (Charlie Murphy), he wants to commit to real change, so they’re set to meet. He wants to meet the people she knows. Is he going to do it for real, or is he intent on doing his part for the British?
After Tom gets on a call with this insider in the Communist ranks, he goes to see Arthur Bigge (Donald Sumpter) with the government. He has demands, meant to be run past Mr. Churchill himself. Bigge doesn’t look pleased, but Tom is playing for all the marbles this time. Not to mention he’s on the ballot for the Birmingham South election; Pol, Ada, the lot of them are headed down to vote for Thomas Shelby, Labour Party. Might as well attack from the inside out. He winds up winning, too.

Quite a different looking future for the Blinders, no? We’ll see how it goes next year. Season 4 was fantastic, and this new dynamic promises new anxieties for Tom, juggling political life, being a gangster, a family man (who’s having an affair), and his PTSD symptoms.