We heard the Man in Black (Ed Harris) talk about “the stain” on his soul. Nobody else could see it. At least, nobody aside from Juliet (Sela Ward), his wife. She and William were quite a pair, both able to quote Plutarch by heart in the face of rich douchebags. And it’s funny, I’ve never thought of ole Bill as a Marxist like Juliet. More a victim of capitalism, who later came to understand some Marxist principles. He got hooked on the universe of Westworld, seeing Dolores (Evan Rachel Wood) out in the real world like a mirage on the Western range.
In current day, Bill’s on the road with his daughter Emily (Katja Herbers). They’ve gotten to a “rally point,” where she hopes to get her dad out and to a hospital. She believes he’s trying to punish himself for his tragic mistakes in life. She doesn’t want to let that happen. Emily reminds her father they’ve all got regrets. She also knows about the project her dad and uncle Logan were working on together at one point. Y’know, the whole road to immortality, all that?
Elsewhere is Dolores, Teddy Flood (James Marsden), and their friends. They come upon the Ghost Nation, who call her the Deathbringer. They refuse to let her pass into the valley beyond. She tries enlightening them about, though it only prompts a nasty battle. The Indigenous tribe doesn’t want the Door and the next world to be touched “by blood.” Dolores understands it’s all a construction, meant to subjugate every last one of them. Although I love her, seeing her violently mow through other hosts is, at times, disconcerting. What’s nice is watching Teddy exert his agency again, refusing to kill one last Ghost Nation warrior fleeing from the desert.

Back at HQ, Charlotte Hale (Tessa Thompson) has one of her techs working on Clementine (Angela Sarafyan), discovering she can control other hosts throwing them into psychotic disarray, similar to the control Maeve Millay (Thandie Newton) has discovered in herself. It’s a chilling moment. Especially considering what they’ll do now with this knowledge. Then there’s Bernard Lowe (Jeffrey Wright), led around by the voice of Dr. Ford (Anthony Hopkins) in his mind. They head off somewhere inside the facility.
Jump back. William runs into Dr. Ford at the bar during a big reception. They have an antagonistic conversation, one that cuts Bill down to the core. These two men were more than at odds. That’s because Ford understood all too well the implications of everything they were all moving towards, despite the varying intents.
Bernard and Dr. Ford go upstairs, where Maeve’s still opened up, bloody, left on one of the operating tables in the tech rooms. He unlocks a memory implanted in Maeve by Ford for her. Afterwards, Bernard gets back to Elsie Hughes (Shannon Woodward) downstairs. He tells her about “the Forge,” where all the information coded about the guests is stored. Massive implications if the hosts are able to get there. They’d be able to replicate all those real people, then go out into the world. So, so, so many implications. And, naturally, it’s all part of what William helped put in motion through Delos Incorporated.
We get more glimpses of the past. Juliet was an alcoholic, frequently making scenes in public. She and William head home early from the big reception, arguing over what he goes to the Westworld park to do and their fraudulent relationship as a whole. Their whole family was crumbling. All the while Bill was just using everybody in his life as a means to a larger end. He and Emily were going to have her committed. Only, before they could, Juliet killed herself.

“All this ugliness, all this pain, so they can patch a hole in their own broken code.”

In the present, William and Emily fall further apart, as she tells him about her mission to expose what’s been going on with his research. She wants to stick him in a hospital, just like they were going to do to her mother. She won’t watch him self destruct and destroy others in the process, too. Mom apparently left his profile when she died, so their daughter would know the whole truth about dad. Once a team of armed men show up, William turns the tables on his daughter, shooting her alongside them. He believes her an agent of Ford, a host. When he’s about to cut into her flesh, he sees his profile card in her hand. It’s then he realises he’s just murdered his daughter, for real. He’s totally lost in the simulacrum. It’s happened, officially.
Ford appears to Maeve, telling her she was always his favourite. He doesn’t want to see her go. She appears to be gearing up to show some fight, instead of letting those men take her apart piece by piece and shut her down. Ford is everywhere, influencing everyone he can. He’s driving Bernard to near madness. But Bernie’s a fighter, he cuts open an arm and links up to his inner workings— he wants to be his OWN man, not the puppet of some master.
Out in a field, William prepares to shoot himself in the head. He thinks back to that night when his wife committed suicide. He has an all too familiar scar on his arm. We skip back to William’s earlier monologue at the opening, when he talked about a darkness in him. “I belong to another world,” he told his sleeping wife. She wasn’t really sleeping. She got up after he left to grab his profile and look for herself. Skip ahead and William decides not to shoot himself. He instead digs a knife into his arm for a look inside. 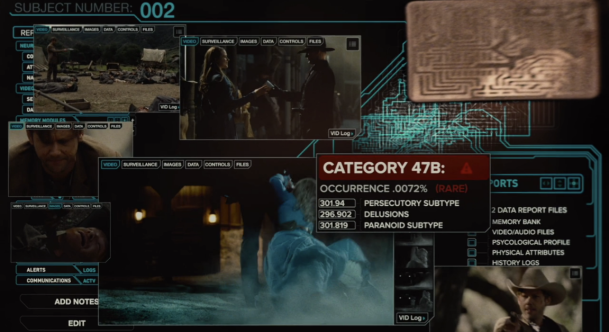 Teddy and Dolores have continued on their journey. He’s seeing things differently, despite being altered by her to what she needs. He has love for her, no matter what. He also remembers the past, as well. And he remembers being outside their world, in the other one where the humans manipulate them. Because he remembers so much, and because he’s been manipulated from all sides, even by Dolores, he chooses to shoot himself— if for nothing else but to be free from Dolores. He doesn’t want to go on if he only becomes “a monster” like the humans who made them. Whoa. Maybe this will change her perspective going forward, seeing the damage her revolution is leaving in its wake.
Fantastic episode. Another of my favourites this season! The big finale is next. “The Passenger” might prove to reveal some big things, and surely it’ll go out with a bang, of some kind.